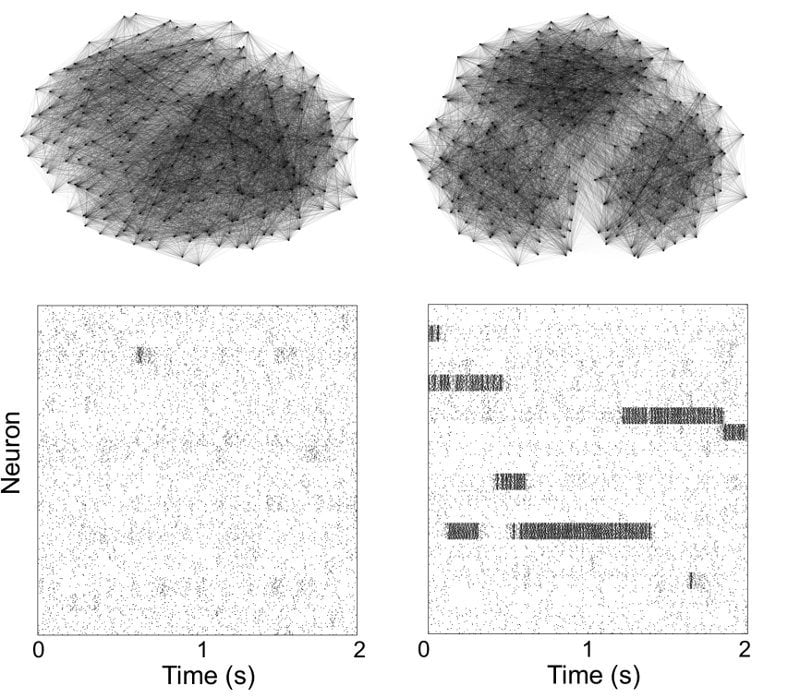 Every time a neuron in the network fires, a dot is placed indicating the time (x-axis) and neuron (y-axis). The collection of dots show the overall dynamics in the network. This model shows how clustering provides more competitive dynamics, where clusters are winning and losing randomly in time.
Home
Featured

Like a Noisy Political Campaign, “Grassroots” Neurons Wire and Fire Together for Dominance in the Brain

Pitt researchers publish findings of mathematical modeling of the brain.

Inside the brain, an unpredictable race—like a political campaign—is being run. Multiple candidates, each with a network of supporters, have organized themselves into various left- and right-wing clusters—like grassroots political teams working feverishly to reinforce a vision that bands them together. While scientists know that neurons in the brain anatomically organize themselves into these network camps, or clusters, the implications of such groupings on neural dynamics have remained unclear until now.

Using mathematical modeling, two researchers from the University of Pittsburgh have found that neurons team up together to sway particular outcomes in the brain and take over the nervous system in the name of their preferred action or behavior. The findings will be published in the November print issue of Nature Neuroscience.

“Through complex mathematical equations, we organized neurons into clustered networks and immediately saw that our model produced a rich dynamic wherein neurons in the same groups were active together,” said Brent Doiron, assistant professor of mathematics.

Together with Ashok Litwin-Kumar, a PhD student in neural computation in Pitt and Carnegie Mellon’s Center for the Neural Basis of Cognition, Doiron found that, like a political race, the brain’s neurons divide into a collection of candidates (clusters) with various preferences, each with its own network of supporters (neurons) interacting on a competitive playing field (the cortex). The Pitt researchers’ mathematical models show that few neural teams can be highly active and “in the lead” at any given time, advocating for their stimulus or response preference and suppressing the preferences of the other teams.

However, when Doiron and Litwin-Kumar introduced a stimulus to select only a few groups in the network, the competition quickly became unbalanced. Similar to selective funding during a campaign, the parties with “more campaign money” (neurons influenced by their preferred stimulus) had a higher probability of “winning the race” (or taking over the nervous system).

“We found that stimulation actually reduces the firing rate variability among neurons, an observation that is consistent with recent cortical readings,” said Doiron. “Our results show that even weak stimuli can substantially change our balanced network dynamics, making brain dynamics much more predictable.”

When there was no stimulus, Doiron and Litwin-Kumar saw that the landscape of winners and losers was very random in time, with clusters randomly transitioning from the lead position to secondary positions and vice versa, much like a contentious political primary race trying to decide the leader of a party.

These significant fluctuations over long periods of time mimicked recorded activity in the spontaneously active brain. While past models of unclustered brains could not capture this key dynamic, this new model gives a plausible explanation for how spontaneous neural activity arises and is maintained.

These results explore for the first time how the wiring of the nervous system can influence stochastic (or unpredictable) brain dynamics, especially when the brain is spontaneously active. Doiron said there has been significant research on how the brain responds to input—such as during tasks like remembering a phone number or grasping a cup. However, the neuroscience community has only just begun to think about what is happening in the brain when there are no inputs and the brain is seemingly idle.

“Unlike the quiet states of your computer between processing jobs, the brain has a highly variable and random political fight going on when there are no immediate tasks,” said Doiron. “This fight likely consolidates factions and keeps specific networks well linked, a feature that can be crucial for proper brain functioning in driven states.”

Our Brains ‘Time-Stamp’ Sounds to Process the Words We Hear

With their new models, Doiron and Litwin-Kumar plan to investigate how the spontaneous neural dynamics caused by these clustered neurons impact the processing of a stimulus, helping them possibly understand new forms of biological-inspired computation. He said that neural computation is a new field with significant challenges ahead.

“A good start is to understand what is happening in the brain’s default spontaneous state, and from there a more comprehensive theory of neural cognition can be made,” said Doiron.

Research supported by grants from the National Science Foundation, the Sloan Foundation, and the U.S. Department of Defense.