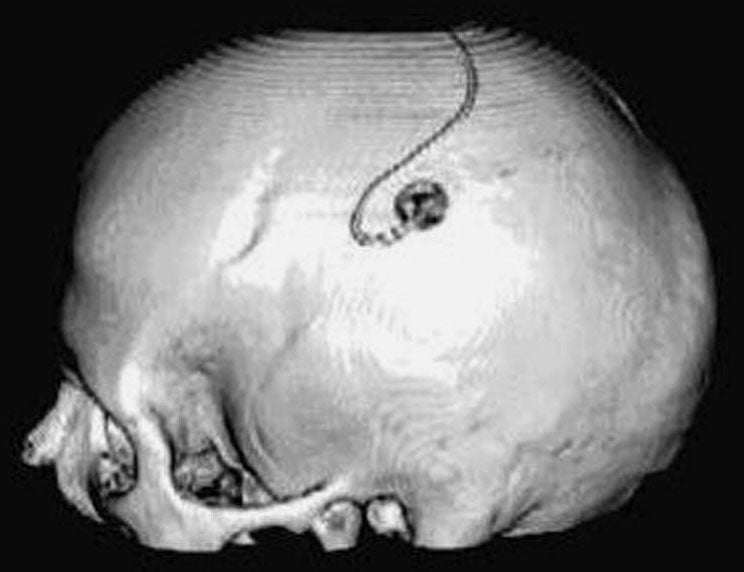 The electrodes were placed over a brain area called the motor cortex, which governs voluntary muscle movements. The study was designed to demonstrate the safety of the EMCS approach, and to provide preliminary information on its effectiveness in relieving the various types of movement abnormalities in Parkinson's disease. This image is from another extradural motor cortex stimulation report. More in the notes.
Home
Featured

Electrical stimulation using extradural electrodes—placed underneath the skull but not implanted in the brain, is a safe approach with meaningful benefits for patients with Parkinson’s disease, reports the October issue of Neurosurgery, official journal of the Congress of Neurological Surgeons. The journal is published by Lippincott Williams & Wilkins, a part of Wolters Kluwer Health.

The technique, called extradural motor cortex stimulation (EMCS), may provide a less-invasive alternative to electrical deep brain stimulation (DBS) for some patients with the movement disorder Parkinson’s disease. The study was led by Dr. Beatrice Cioni of Catholic University, Rome.

The researchers evaluated EMCS in nine patients with Parkinson’s disease. Over the past decade, DBS using electrodes implanted in specific areas within the brain has become an accepted treatment for Parkinson’s disease. In the EMCS technique, a relatively simple surgical procedure is performed to place a strip of four electrodes in an “extradural” location—on top of the tough membrane (dura) lining the brain.

The electrodes were placed over a brain area called the motor cortex, which governs voluntary muscle movements. The study was designed to demonstrate the safety of the EMCS approach, and to provide preliminary information on its effectiveness in relieving the various types of movement abnormalities in Parkinson’s disease.

The electrode placement procedure and subsequent electrical stimulation were safe, with no surgical complications or other adverse events. In particular, the patients had no changes in intellectual function or behavior and no seizures or other signs of epilepsy.

Extradural stimulation led to small but significant and lasting improvements in control of voluntary movement. After one year, motor symptoms improved by an average of 13 percent on a standard Parkinson’s disease rating scale, while the patient was off medications.

The improvement appeared after three to four weeks of electrical stimulation and persisted for a few weeks after stimulation was stopped. In one case where the stimulator was accidentally switched off, it took four weeks before the patient even noticed.

Extradural stimulation was particularly effective in relieving the “axial” symptoms of Parkinson’s disease, such as difficulties walking. Patients had significant improvement in walking ability, including fewer problems with “freezing” of gait. The EMCS procedure also reduced tremors and other abnormal movements while improving scores on a quality-of-life questionnaire.

Although DBS is an effective treatment for Parkinson’s disease, it’s not appropriate for all patients. Some patients have health conditions or old age that would make surgery for electrode placement too risky. Other patients—including four of the nine patients in the new study—are eligible for DBS but don’t want to undergo electrode placement surgery.

The concept of extradural stimulation is not new, but previous studies have had important limitations, with inconsistent results. The new report is the largest study of EMCS performed using a standard technique in a well-defined group of patients.

The findings show that extradural stimulation is not only safe for patients with Parkinson’s disease, but also effective in improving movement disorder symptoms—with “remarkable effects on axial symptoms,” according to Dr. Cioni and colleagues. Although the improvement is not as great as with DBS, the researchers believe that EMCS “should be considered as an alternative option” for at least some groups of patients. Further studies, including long-term follow-up, are underway.