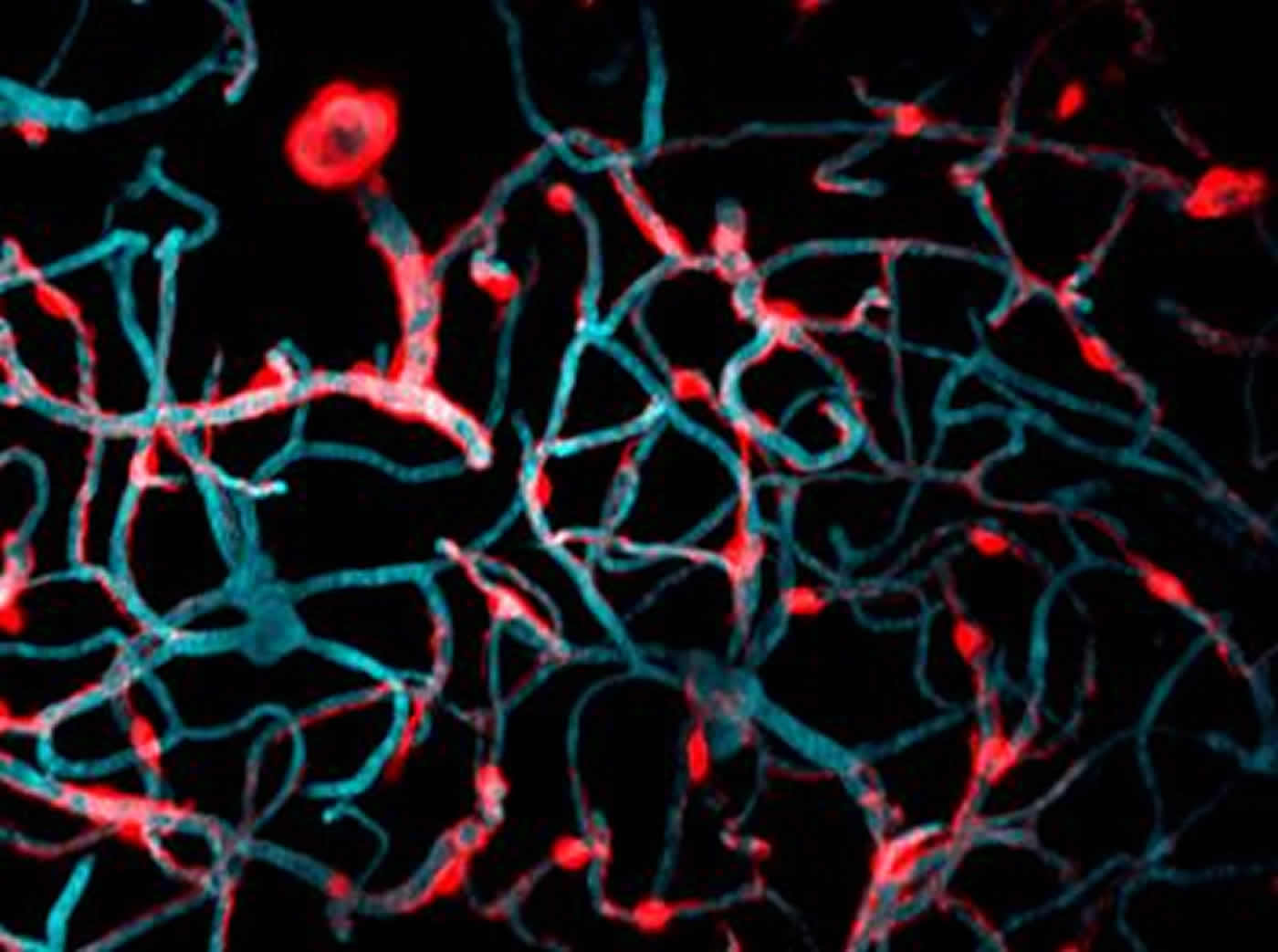 The long arms of pericytes (shown in red) appear draped over capillaries in the brain (shown in blue). NeuroscienceNews.com image is credited to Dr. Andy Shih, Medical University of South Carolina.

How the Brain Responds to Vascular Injury

Summary: A new neuroimaging study reveals pericytes, a type of cell found in the brain’s blood vessels, grow to compensate for the loss of neighboring cells.

Pericytes, a little-understood type of cell on the brain’s blood vessels, grow into the empty space left when neighboring pericytes die, report researchers at the Medical University of South Carolina (MUSC) in a January 2nd, 2018 article in Cell Reports. Such growth is a kind of brain plasticity that might be harnessed to fight age-related vascular disorders, such as Alzheimer’s disease and stroke.

Pericytes, a type of mural cell, appear in microscopic images to have been painted on the surface of blood vessels. They help blood vessels mature as the brain grows; however, very little is known about how they function in the adult brain. They are thought to maintain the blood-brain barrier, a structure that helps to prevent unwanted substances from entering the brain through the bloodstream.

Pericytes die in large numbers during stroke, Alzheimer’s disease and other brain disorders that tend to afflict aging adults. Yet scientists do not know how many distinct types of pericytes there are or what functions the different types perform, according to Andy Y. Shih, Ph.D., assistant professor in the MUSC Department of Neuroscience and principal investigator on the project.

“Pericytes are probably the least understood of the cells that comprise the neurovascular unit, which forms the blood vessel walls in the brain,” said Shih.

Shih is interested in what pericytes do in the adult brain and why they appear so vulnerable to stroke and Alzheimer’s disease.

In the study, adult mice were genetically modified so that their brain pericytes glowed brightly under a powerful two-photon microscope. Using this technique, Shih and doctoral student Andrée-Anne Berthiaume, who performed the experiments, were able to take detailed pictures over several weeks to see what happened to the brain when pericytes were lost.

In live mice, the pericytes were seen as oval cell bodies often located near junctions where two capillaries intersected, with long tentacle-like arms called processes extending outward along the capillaries. The tips of those long arms appeared to nearly touch the arm tips of their neighbors, so that these unusual cells formed a large non-overlapping structure that blanketed much of the capillaries. Yet it was still unclear what would happen were one of the cells in this extensive structure to be lost.

To study what happens when a pericyte is lost, Shih’s team used a precision beam of laser light to burn off a single pericyte at a time — a process called ablation. Intriguingly, when a pericyte was ablated, the capillary to which it had been clinging appeared to dilate. As the researchers ablated more pericytes and collected more images over time, they observed a curious pattern: over a period of days to weeks, the processes of neighboring pericytes grew to cover the capillaries where pericytes had been ablated. Those capillaries regained their normal tone, meaning that they were no longer dilated. When their neighbors were lost, the surviving pericytes seemed to compensate for the job of keeping capillaries toned, a feature that is essential to maintain healthy blood flow in the brain.

The images captured by Shih’s group of pericytes extending their arms to cover exposed capillaries are the first of their kind. “Most methods to study pericytes give you a snapshot in time. To be able to do this dynamically in a live animal’s brain is an important step forward,” said Shih.

Surprisingly, losing individual pericytes did not weaken the blood-brain barrier as expected. Shih speculates that other cell types that grow more rapidly toward injured sites in the brain, such as microglial cells, were acting quickly to protect the capillaries where pericytes were ablated. Unlike microglial cells, which must shrink parts of themselves to reach toward injured sites, pericytes grew larger to occupy the territory left by lost neighbors. Yet Shih suspects that there is a limit to how much pericytes can grow to compensate for their lost neighbors. Although these findings show that pericytes can take over the job of supporting capillary tone when a single neighbor is lost, it is still not clear what happens when larger numbers of pericytes die, as they do in Alzheimer’s disease or stroke.

The Alzheimer’s Association is funding Shih’s next steps, which includes testing the health of blood vessels in the brain when larger numbers of pericytes are ablated. Shih and his group are also studying the plasticity of pericytes — how they grow their way through dense capillary tissue that is built to stop passage of even small molecules. Solving that puzzle could reveal ways to facilitate new pericyte growth, which in turn could combat the type of blood vessel dysfunction observed in Alzheimer’s disease and stroke.

“Are there ways to augment this plasticity, to protect it and stabilize it if we need to? There are mechanisms driving this that we need to understand,” said Shih.

Summary
Direct contact and communication between pericytes and endothelial cells is critical for maintenance of cerebrovascular stability and blood-brain barrier function. Capillary pericytes have thin processes that reach hundreds of micrometers along the capillary bed. The processes of adjacent pericytes come in close proximity but do not overlap, yielding a cellular chain with discrete territories occupied by individual pericytes. Little is known about whether this pericyte chain is structurally dynamic in the adult brain. Using in vivo two-photon imaging in adult mouse cortex, we show that while pericyte somata were immobile, the tips of their processes underwent extensions and/or retractions over days. The selective ablation of single pericytes provoked exuberant extension of processes from neighboring pericytes to contact uncovered regions of the endothelium. Uncovered capillary regions had normal barrier function but were dilated until pericyte contact was regained. Pericyte structural plasticity may be critical for cerebrovascular health and warrants detailed investigation.