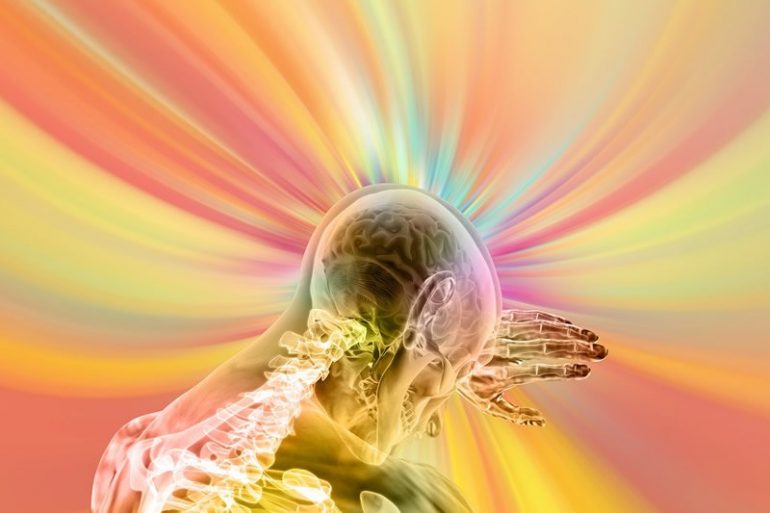 The results also suggest that the quality of mutations, not just their absolute number, may be important when predicting who will benefit from immune checkpoint treatments. The image is in the public domain.

Summary: Glioma patients whose tumors were hypermutated showed no significant benefit when treated with checkpoint blockers.

Cancers whose cells are riddled with large numbers of DNA mutations often respond favorably to drugs called checkpoint blockers that unleash the immune system against the tumor. But a new study shows that malignant brain tumors known as gliomas generally don’t respond to the immunotherapy drugs even when the tumor cells are “hypermutated” — having thousands of DNA mutations that, in other kinds of cancer, provoke the immune system into an attack mode.

An analysis of more than 10,000 gliomas and clinical outcomes reported in Nature by scientists in Boston and Paris found that glioma patients whose tumors were hypermutated actually had no significant benefit when treated with checkpoint blockers. This finding was somewhat unexpected, because immune checkpoint blockers have been shown to be often effective in other types of cancer — including melanoma, colorectal, and endometrial cancers — if their cells have defective DNA damage repair mechanisms and are hypermutated. The results of the study are further evidence of the challenges presented by malignant brain tumors, which are initially treated by surgery but are difficult to remove in their entirety, necessitating systemic treatment radiation and chemotherapy.

Immunotherapy, which has become an important tool in cancer treatment in recent years, has yet to show much benefit in brain tumors. “It seems that in gliomas you can have hundreds or thousands of DNA mutations and the immune system is still suppressed and ultimately unable to recognize cancer cells as being abnormal,” said Mehdi Touat, MD, of the Sorbonne University and neuro-oncologist in Pitié-Salpêtrière hospitals in Paris, a co-first author of the report. Keith Ligon, MD, PhD, of Dana-Farber Cancer Institute, Brigham and Women’s Hospital, and the Broad Institute of MIT and Harvard, is co-senior author of the study.

The results also suggest that the quality of mutations, not just their absolute number, may be important when predicting who will benefit from immune checkpoint treatments. “Our data indicates that the absence of an immune response in gliomas likely results from several complex aspects of immunosuppression in the brain which will need further characterization,” wrote the authors. “Approaches that increase the tumor microenvironment infiltration by cytotoxic lymphocytes are likely required to improve immunotherapy response in gliomas.”

Ligon noted that the study also showed how treatment with the drug temozolomide — the standard chemotherapy for gliomas — can lead to the tumors becoming hypermutated and resistant to further treatment. Temozolomide (Temodar) does benefit patients, but in some patients it also seems to cause the emergence of hypermutated cells that can resist the drug and then these surviving glioma cells cause the tumors to progress, said Ligon. The researchers said the results do not suggest that temozolomide should not be used in glioma patients, but that once resistance develops, further treatment with temozolomide would not be effective. Instead, they showed that treatment with another chemotherapy drug called lomustine (CeeNU) seemed to still be effective in that setting for some patients.

“We’ve demonstrated that the longer people took temozolomide the more likely it was that their tumors became hypermutated,” said David Reardon, MD, clinical director of Dana-Farber’s Center for Neuro-Oncology and an author on the Nature report. He said the finding that treatment with lomustine was not associated with the hypermutated resistant state is a glimmer of good news. “If a patient becomes resistant to temozolomide, there is not much to offer them, but this suggests that some of these patients might get benefit from lomustine. Our data suggests we could try this.”

About this brain cancer research article

Mechanisms and therapeutic implications of hypermutation in glioma

A high tumour mutational burden (hypermutation) is observed in some gliomas; however, the mechanisms by which hypermutation develops and whether it predicts the response to immunotherapy are poorly understood. Here we comprehensively analyse the molecular determinants of mutational burden and signatures in 10,294 gliomas. We delineate two main pathways to hypermutation: a de novo pathway associated with constitutional defects in DNA polymerase and mismatch repair (MMR) genes, and a more common post-treatment pathway, associated with acquired resistance driven by MMR defects in chemotherapy-sensitive gliomas that recur after treatment with the chemotherapy drug temozolomide. Experimentally, the mutational signature of post-treatment hypermutated gliomas was recapitulated by temozolomide-induced damage in cells with MMR deficiency. MMR-deficient gliomas were characterized by a lack of prominent T cell infiltrates, extensive intratumoral heterogeneity, poor patient survival and a low rate of response to PD-1 blockade. Moreover, although bulk analyses did not detect microsatellite instability in MMR-deficient gliomas, single-cell whole-genome sequencing analysis of post-treatment hypermutated glioma cells identified microsatellite mutations. These results show that chemotherapy can drive the acquisition of hypermutated populations without promoting a response to PD-1 blockade and supports the diagnostic use of mutational burden and signatures in cancer.