A process previously thought to be mere background noise in the brain has been found to shape the growth of neurons as the brain develops, according to research from the MRC Centre for Developmental Neurobiology (CDN), Institute of Psychiatry, Psychology & Neuroscience (IoPPN), published in Cell Reports.

Spontaneous release of neurotransmitter by neurons in the brain previously had no clearly defined function but researchers from the MRC CDN, IoPPN noticed that considerably more spontaneous release events happened during development. It now appears that spontaneous release of the neurotransmitter glutamate may cause the processes of a growing neuron to branch, enabling it to connect with countless other neurons via chemical connections called synapses. Synapses are responsible for regulating the passage of electrical signals through the brain. As well as explaining spontaneous glutamate release in the developing brain, the researchers also found that glutamate is effective at far larger distances than previously thought. This work has important implications for our understanding of how neurons develop and connect with each other, which in turn could be relevant to treating neurodevelopmental disorders that affect synapse development, such as autism.

“Spontaneous release has long been the poor cousin to release evoked by activity and, in the past, was often assumed to simply represent ‘noise’ in the system,” said Dr Laura Andreae, Lecturer in the MRC Centre for Developmental Neurobiology, who jointly led the research. “We’ve found that, in fact, it has an important role in promoting the complex branching pattern of neuronal dendrites – the tree-like processes that neurons use to connect with other neurons.”

Branching allows the neuron to form multiple junctions that can connect it to other neurons and so is essential for building the network of neurons that form brain structure. This new research suggests that a key signal for a neuron to branch into a new dendrite comes from spontaneous release events and the cue occurs much earlier in the neuron growth cycle than previously thought, even before the formation of synapses. 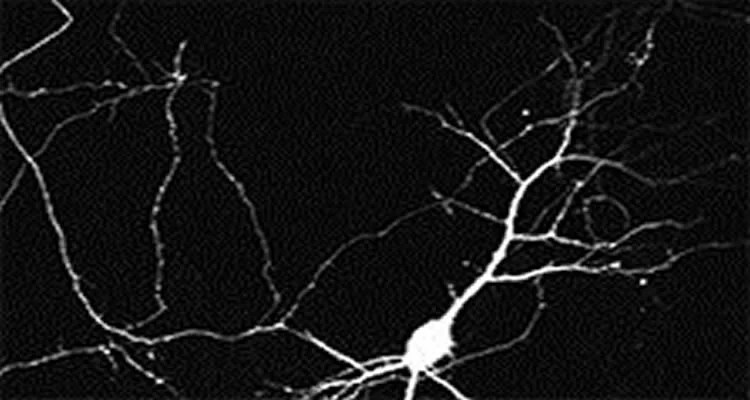 Branching allows the neuron to form multiple junctions that can connect it to other neurons and so is essential for building the network of neurons that form brain structure. Image credit: Kings College London.

“One aspect we find especially fascinating is that the brain is using exactly the same machinery that we traditionally think of as being involved in synapse function to help build synaptic connections early on in development. Using the same neurotransmitter, namely glutamate, and many of the same synaptic proteins in both systems is very efficient.”

A better understanding of how neurons in the brain develop may help us overcome disorders including autism and intellectual disability.

Dr Andreae concludes: “We think spontaneous release may be far more important than previously realised for the development of neural connections. We’d now like to understand this process better, and also find out whether it is affected in models of neurodevelopmental disorders such as autism, or intellectual disability.”

About this electrophysiology research

Reward improves visual perceptual learning, but only after people sleep

Violence and adversity in early life can alter the brain