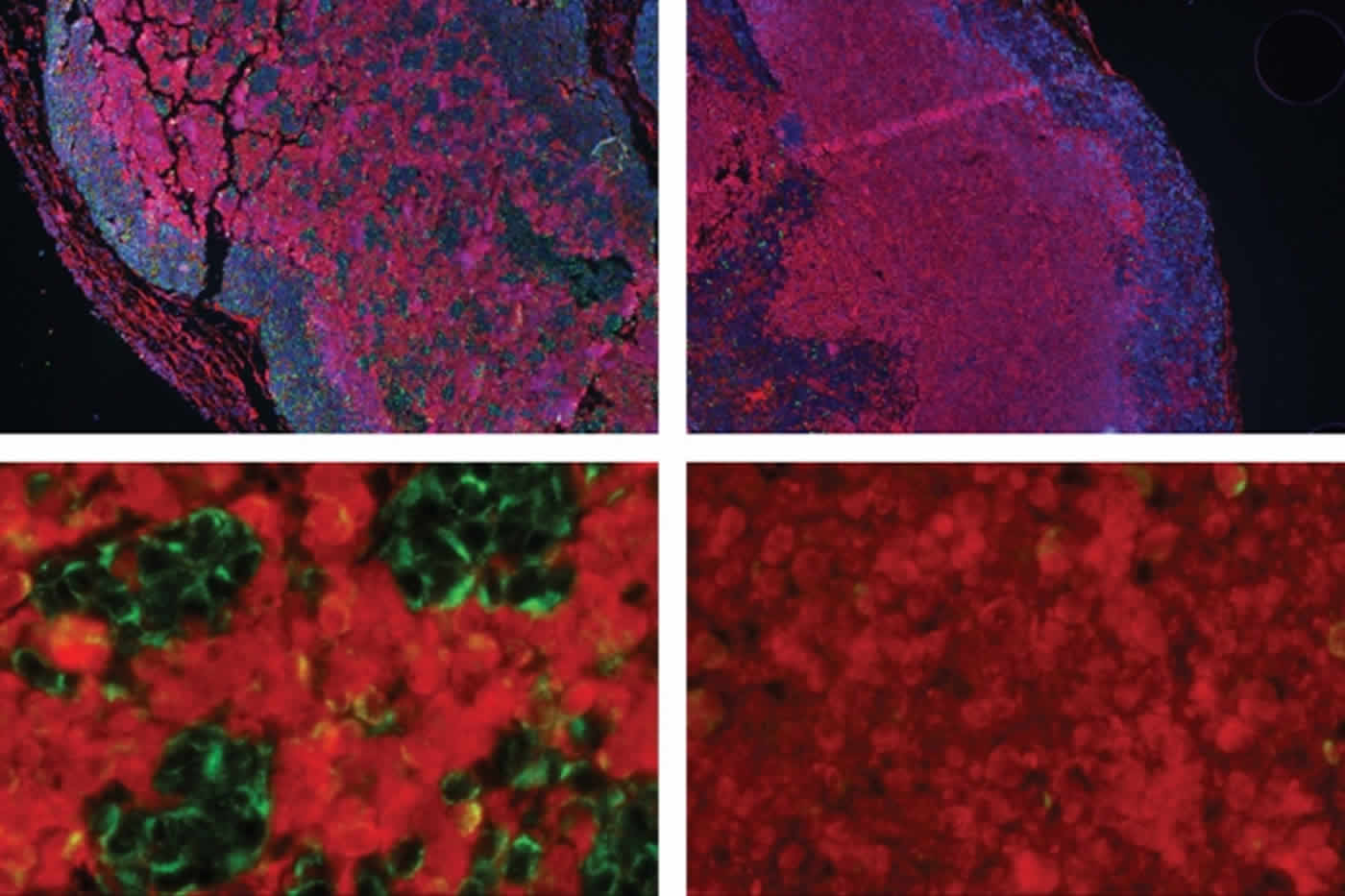 The top two panels show tumors produced by cancer cells. The outer ring of cells (blue) has enough oxygen to survive, but not as much oxygen reaches the inner cells. At top right, tumor cells lack the SHMT2 gene and are unable to survive in this central region, as indicated by the pink stain that marks a protein produced during cell death. At top left, the cells express high levels of SHMT2, allowing some of them to survive, indicated by the blue clusters of cells. The bottom two panels are magnifications of the central tumor regions. Image courtesy of the researchers.

Discovery could offer a new target for treatment of glioblastoma.

Biologists at MIT and the Whitehead Institute have discovered a vulnerability of brain cancer cells that could be exploited to develop more-effective drugs against brain tumors.

The study, led by researchers from the Whitehead Institute and MIT’s Koch Institute for Integrative Cancer Research, found that a subset of glioblastoma tumor cells is dependent on a particular enzyme that breaks down the amino acid glycine. Without this enzyme, toxic metabolic byproducts build up inside the tumor cells, and they die.

Blocking this enzyme in glioblastoma cells could offer a new way to combat such tumors, says Dohoon Kim, a postdoc at the Whitehead Institute and lead author of the study, which appears in the April 8 online edition of Nature.

David Sabatini, a professor of biology at MIT and member of the Whitehead Institute, is the paper’s senior author. Matthew Vander Heiden, the Eisen and Chang Career Development Associate Professor of Biology and a member of the Koch Institute, also contributed to the research, along with members of his lab.

GLDC caught the researchers’ attention as they investigated diseases known as “inborn errors of metabolism,” which occur when cells are missing certain metabolic enzymes. Many of these disorders specifically affect brain development; the most common of these is phenylketonuria, marked by an inability to break down the amino acid phenylalanine. Such patients must avoid eating phenylalanine to prevent problems such as intellectual disability and seizures.

Loss of GLDC produces a disorder called nonketotic hyperglycinemia, which causes glycine to build up in the brain and can lead to severe mental retardation. GLDC is also often overactive in certain cells of glioblastoma, the most common and most aggressive type of brain tumor found in humans.

The researchers found that GLDC, which breaks down the amino acid glycine, is overexpressed only in glioblastoma cells that also have high levels of a gene called SHMT2, which converts the amino acid serine into glycine. Those cells are so dependent on GLDC that when they lose it, they die.

Further investigation revealed that SHMT2 is expressed most highly in cancer cells that live in so-called ischemic regions — areas that are very low in oxygen and nutrients.

These regions are often found at the center of tumors, which are inaccessible to blood vessels. It turns out that in this low-oxygen environment, SHMT2 gives cells a survival edge because it can indirectly influence the activity of an enzyme called PKM2, which is part of the cell’s machinery for breaking down glucose.

Regulation of PKM2 can impact whether cells can generate the material to build new cancer cells, but the same regulation also affects the consumption of oxygen — a scarce resource in ischemic regions.

“Cells that have high SHMT2 activity have low PKM2 activity, and consequently low oxygen-consumption rates, which makes them better suited to survive in the ischemic tumor microenvironment,” Kim says.

However, this highly active SHMT2 also produces a glut of glycine, which the cell must break down using GLDC. Without GLDC, glycine enters a different metabolic pathway that generates toxic products that accumulate and kill the cell.

“An interesting aspect of the current study is that they uncovered why glycine accumulation is toxic,” says Navdeep Chandel, a professor of medicine and cellular biology at Northwestern University who was not part of the research team. “GLDC loss accumulates glycine, causing nonketotic hyperglycinaemia, a disorder that severely affects the developing brain. Sabatini and colleagues elucidated that loss of GLDC builds up glycine levels, resulting in funneling of glycine into metabolic pathways that generate toxic molecules, such as aminoacetone and methylglyoxal.”

The finding also raises the possibility that these GLDC-dependent cells could be killed with drugs that block GLDC activity, according to the researchers, who are now seeking potential drug compounds that could do just that.

About this brain cancer research

Funding: The research was funded by the American Brain Tumor Association, the National Institutes of Health, and the Koch Institute.

Cancer cells adapt their metabolic processes to support rapid proliferation, but less is known about how cancer cells alter metabolism to promote cell survival in a poorly vascularized tumour microenvironment1, 2, 3. Here we identify a key role for serine and glycine metabolism in the survival of brain cancer cells within the ischaemic zones of gliomas. In human glioblastoma multiforme, mitochondrial serine hydroxymethyltransferase (SHMT2) and glycine decarboxylase (GLDC) are highly expressed in the pseudopalisading cells that surround necrotic foci. We find that SHMT2 activity limits that of pyruvate kinase (PKM2) and reduces oxygen consumption, eliciting a metabolic state that confers a profound survival advantage to cells in poorly vascularized tumour regions. GLDC inhibition impairs cells with high SHMT2 levels as the excess glycine not metabolized by GLDC can be converted to the toxic molecules aminoacetone and methylglyoxal. Thus, SHMT2 is required for cancer cells to adapt to the tumour environment, but also renders these cells sensitive to glycine cleavage system inhibition.

Why not share this article with a science loving friend?