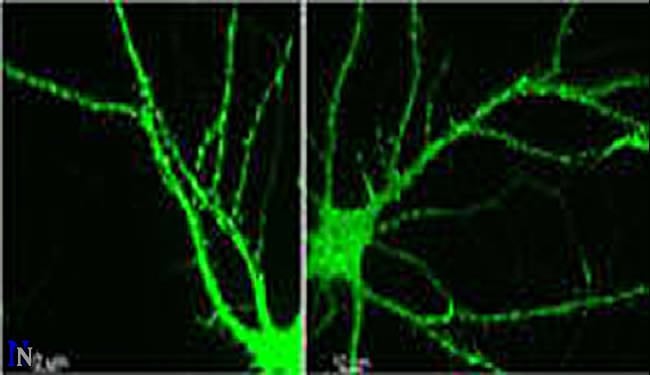 New research shows how the protein missing in fragile X syndrome – the most common inherited form of intellectual disability – acts as a molecular toggle switch in brain cells.

The fragile X protein, called FMRP, hooks up with a group of molecules called microRNAs to switch the production of other proteins on and off in response to chemical signals, scientists at Emory University School of Medicine have discovered.

The results appear in the June 10 issue of Molecular Cell.

“For learning and memory to take place, neurons need to be able to make new proteins on demand, at particular synapses in a localized way,” says senior author Gary Bassell PhD, professor of cell biology and neurology at Emory University School of Medicine. “It appears that FMRP has evolved to use microRNAs to control the synthesis of proteins at synapses.”

In fragile X syndrome, FMRP’s absence leads to overactive signaling and unregulated protein production at synapses, the junctions between brain cells where chemical communication occurs. This leads to structural changes at synapses and an impairment of cells’ ability to respond to chemical signals, which in turn interferes with learning and memory.

Muddashetty and Bassell focused on a particular protein called PSD-95, whose production they had previously discovered was regulated by FMRP – although they didn’t know how FMRP exerted its control. PSD-95 appears to have an important role in anchoring together signaling molecules at synapses, the parts of neurons directly involved in learning and memory. Mice lacking the gene for PSD-95 develop normally but have more difficulty learning the location of a hidden platform in a water maze, compared with normal mice.

“The changes at synapses seen in fragile X syndrome are probably not caused by the overproduction of a single protein,” Bassell says. “But we think that losing the ability to make PSD-95 on demand is an important component.”

In cultured neurons, Muddashetty studied part of the RNA molecule encoding PSD-95, which responds to excitement by the neurotransmitter glutamate. This way he could dissect which proteins and RNA molecules were needed. Interfering with a particular microRNA, called miR-125, could stop the PSD-95 RNA from responding to glutamate signaling and could even drive neurons to produce more protrusions at their synapses.

MicroRNAs are involved in a process called RNA interference, whose discovery earned the 2006 Nobel Prize in Medicine. RNA interference is a way that short RNA molecules (microRNAs) can silence a stretch of genetic code.

These tiny RNA molecules have become a widely used laboratory tool for shutting off a specific gene. When the RNA molecules are introduced into the cell, they are actually hijacking a machine inside the cell called RISC (RNA-induced silencing complex). MicroRNAs normally govern the activity of RISC, which can prevent a given gene from being translated from RNA into protein.

In a sense, FMRP is acting as a “RISC manager.” Together with microRNA, it clamps down on an RNA, preventing the synthesis of protein, until glutamate signals force them to loosen up. Thus, FMRP determines when the protein should be made at the synapses.

Acute Stress Leads to Dynamic Changes in the Brain

“Future work may uncover whether this is a general mechanism to guide specific miRNAs onto target mRNAs at synapses,” the authors write.

The finding illustrates how microRNAs are emerging as key players in neurological development and disease, Bassell says. Since a given microRNA can regulate hundreds of targets, one potential drug strategy for fragile X syndrome would be to aim at restoring microRNA function.

The research was supported by the National Institutes of Health, the Fraxa Research Foundation and National Fragile X Foundation.