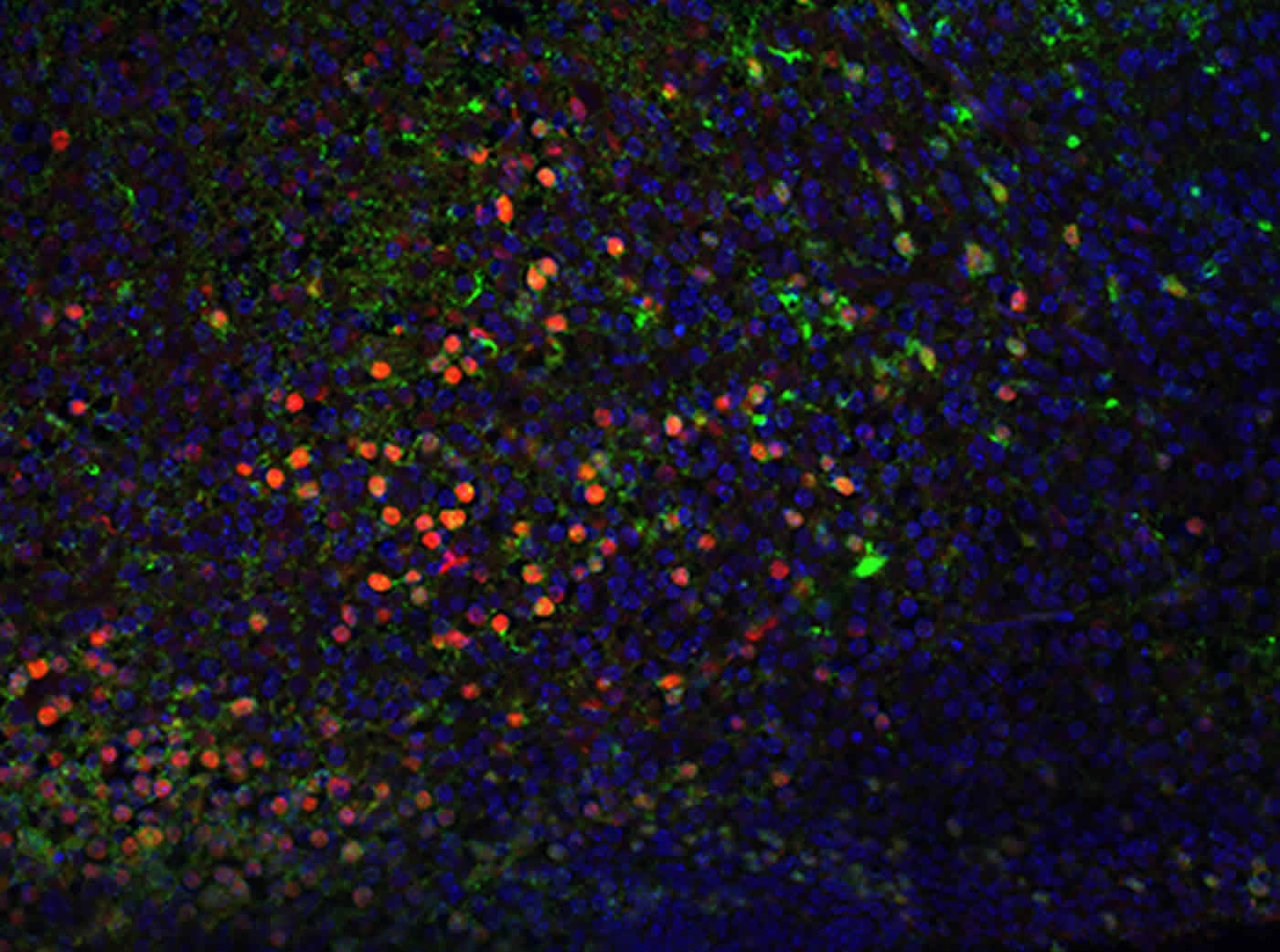 Red fluorescent tag identifies neurons in mouse cortex damaged by prenatal exposure to alcohol which have survived but are more vulnerable to stress after birth. NeuroscienceNews.com image is adapted from the Yale press release.

Summary: A new study reports cells damaged before birth may provide an increased risk of psychiatric disorders later in life.

Researchers have developed a way to identify cells damaged prior to birth by drugs, radiation, or poisons such as mercury that survive but are more vulnerable to stress later in life. This model system can possibly explain the increased risk of some cells in adult onset of psychiatric disorders, liver disease, and other stress-induced diseases.

Scientists at Yale and colleagues now working at the Children’s National Health System in Washington, D.C., discovered that they could identify at-risk cells by putting fluorescent tags on heat shock factor 1 (HSF1), which is generated in cells of the organs undergoing stress or injury. If too little or too much of this factor is present, cells die. At the right level, cells may survive and appear normal.

“In the womb, cells exposed to, say, excessive alcohol consumption may look normal, but when exposed to a traumatic event later in life they can be more vulnerable,” said Yale’s Pasko Rakic, the Dorys McConnell Duberg Professor of Neuroscience and professor of neurology, co-senior author of the paper published the week of Jan. 23 in the Proceedings of the National Academy of Sciences.

The team developed a transgenic mouse in which this key heat shock factor is tagged by a red fluorescent protein. The tag enabled scientists to distinguish vulnerable from normal cells in organs such as the brain or liver. The labeled cells can be selectively damaged by second exposure to a variety of harmful environmental stressors after birth.

This ability to identify a subset of cells that become vulnerable because of prenatal damage may one day help identify individuals who are at higher risk of a variety of disorders later in life. For instance, children born to active alcoholic mothers may be at higher risk of brain or liver disease later in life. Cells damaged before birth may also explain increased risk of late-appearing neuropsychiatric disorders in adolescence or later, when some people appear to be more susceptible to traumatic stress disorders.

The first author, Masaaki Torii, and Kazue Hashimoto-Torii, co-senior author of the paper, are former members of Rakic’s laboratory and are presently at Children’s National. The research was funded by the National Institutes of Health and the Kavli Institute for Neuroscience at Yale.

What Makes Us Human? The Answer May Be Found in Overlooked DNA

Source: Bill Hathaway – Yale
Image Source: NeuroscienceNews.com image is adapted from the Yale press release.
Original Research: The study will appear in PNAS during the week of January 23 2017.