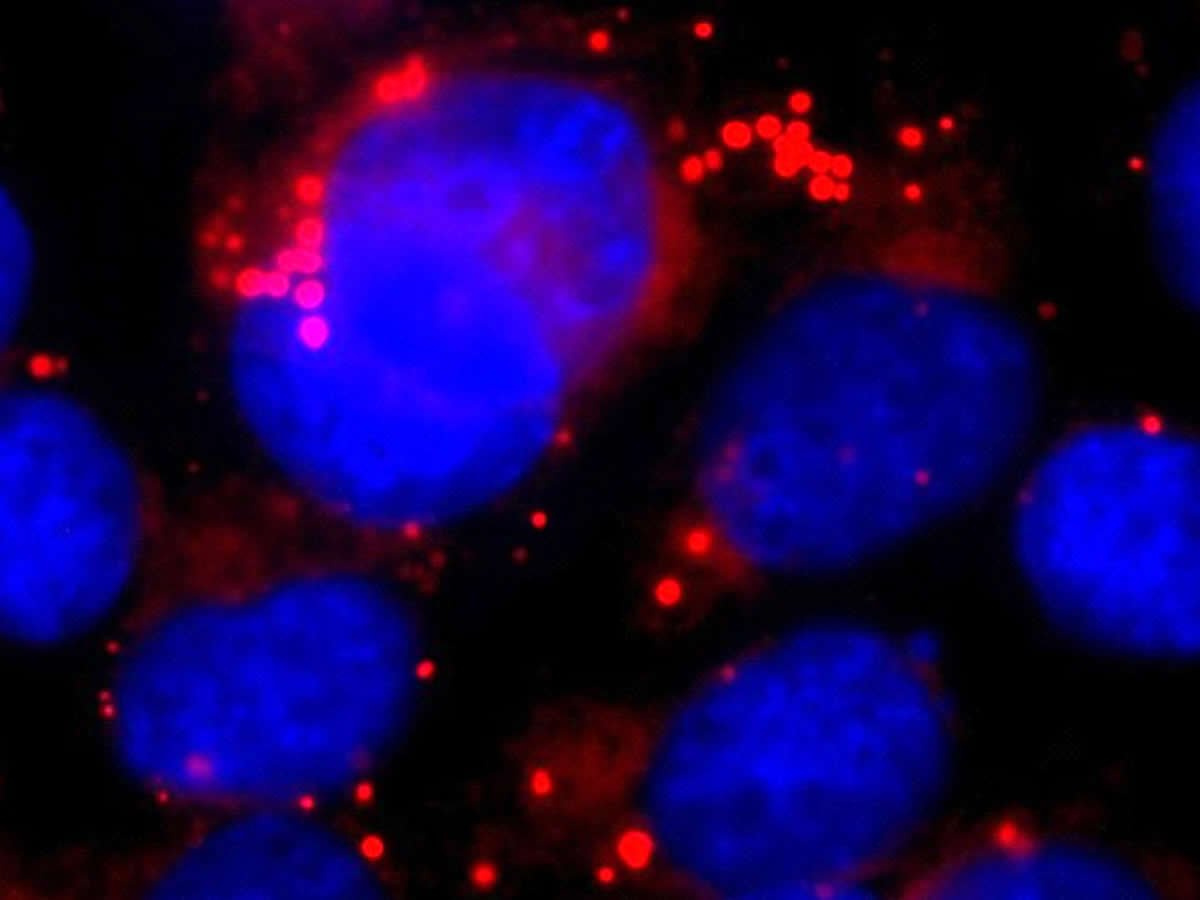 After inhibition of secretase, the examined brain cells, the astrocytes (their cell nucleus is stained blue), accumulate large quantities of lipid droplets (red). These disrupt the normal cell function. Image is credited to AG Walter/Uni Bonnn.

Summary: Researchers discover an important function of gamma-secretase in cells that is critical for lipid homeostasis in the brain.

A protein shredder that occurs in cell membranes of brain cells apparently also indirectly regulates the fat metabolism. This is shown by a recent study by the University of Bonn. The shredder, known as gamma-secretase, is considered a possible target for drugs against cancer and Alzheimer’s disease. However, the results suggest that such agents may have long-range effects that need to be watched closely. The study has now been published in the journal “Life Science Alliance”.

Every cell in the body is surrounded by a fatty film called the plasma membrane. It also contains numerous proteins that span the membrane from outside to inside and act as sensors for the cell: When they encounter certain molecules on the outside, they generate a signal on the inside of the membrane, thereby regulating certain reactions within the cell. Other membrane proteins are able to transport certain substances into the cell.

Gamma-secretase plays an important role in the release of membrane-anchored signaling proteins. But it is also a “cleaning specialist” for discarded membrane proteins: It breaks down the proteins within the cell membrane for further disposal. With this function, the secretase has been in the focus of Alzheimer’s research for almost two decades: Many brain cells contain a protein called APP in their membrane. When gamma-secretase breaks down APP, one of the fragments is released into the brain fluid: the so-called Abeta peptide. This peptide is the main constituent of the plaques found in the damaged brain areas of Alzheimer’s patients. “Originally, it was therefore hoped that the inhibition of gamma-secretase could slow down Alzheimer’s disease,” explains Prof. Dr. Jochen Walter. “Unfortunately, that hasn’t proved successful so far.”

Waste in the membrane

It is now known that gamma secretase exerts important roles in the functioning of cells. If it fails, cellular membranes gradually fills up with waste. This could for instance impair the effective uptake of certain molecules into the cells. The current study shows serious consequences of such a failure. The APP also plays a key role here: “When we inhibit gamma secretase in cell cultures, APP accumulates in the membranes,” explains Walter’s colleague Dr. Esteban Gutierrez. “This in turn hinders the absorption of so-called lipoproteins from the environment.”

This mechanism triggers a fatal process. Lipoproteins are particles of proteins and fat-like molecules, the lipids. If too few of them enter the cell, the cell suspects a lipid deficiency. To remedy this, the cell increases its own lipid synthesis. “We have shown that inhibition of the causes a strong activation of a central regulator of lipid synthesis called LXR,” says Gutierrez. The lipids are partially transported out of the cell; however, due to the disturbed lipoprotein uptake, the cell does not receive feedback that this measure was successful and continues to produce more lipids. This means that numerous fat droplets accumulate inside the cell over time. In excessive quantities, this leads to adiposis in the cell interior, which can disrupt important cellular functions.

“Other studies have already shown that a disruption of the lipid metabolism in the brain can also contribute to the development of Alzheimer’s disease,” explains Prof. Walter. “Our study points to a mechanism by which this could happen.” The inhibition of gamma secretase may therefore cause an opposite effect one would expect from this measure.

Inhibition of secretase hinders the division of cancer cells

However, it is more promising in another context – the fight against cancer. The cell membrane contains proteins that stimulate cell division. If gamma-secretase is inactivated in tumor cells, these proteins are no longer released from the membrane, and thus, the cancer cells can no longer replicate as quickly. “In this case, too, the treatment causes side effects,” Walter emphasizes. “As long as they are mainly confined to cancer cells, this is probably not a major problem; nevertheless, one should keep an eye on them.”

The publication is also an expression of successful collaboration within the university: With the laboratories of Professors Jochen Walter, Dieter Lütjohann and Christoph Thiele, neuroscientists, pharmacologists and biochemists from the Faculty of Medicine and the Faculty of Mathematics and Natural Sciences at the University of Bonn worked together hand in hand on this project.

Presenilins (PS) are the catalytic components of γ-secretase complexes that mediate intramembrane proteolysis. Mutations in the PS genes are a major cause of familial early-onset Alzheimer disease and affect the cleavage of the amyloid precursor protein, thereby altering the production of the amyloid β-peptide. However, multiple additional protein substrates have been identified, suggesting pleiotropic functions of γ-secretase. Here, we demonstrate that inhibition of γ-secretase causes dysregulation of cellular lipid homeostasis, including up-regulation of liver X receptors, and complex changes in the cellular lipid composition. Genetic and pharmacological inhibition of γsecretase leads to strong accumulation of cytoplasmic lipid droplets, associated with increased levels of acylglycerols, but lowered cholesteryl esters. Furthermore, accumulation of lipid droplets was augmented by increasing levels of amyloid precursor protein C-terminal fragments, indicating a critical involvement of this γ-secretase substrate. Together, these data provide a mechanism that functionally connects γ-secretase activity to cellular lipid metabolism. These effects were also observed in human astrocytic cells, indicating an important function of γ-secretase in cells critical for lipid homeostasis in the brain.