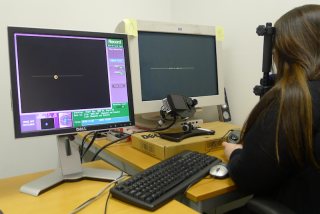 Participants' eye movements were recorded as they read short sentences on a computer screen; head movements were minimized by padded chin- and head-rests. Credited to D. Titone
Home
Featured

A study of eye movements in schizophrenia patients provides new evidence of impaired reading fluency in individuals with the mental illness.

The findings, by researchers at McGill University in Montreal, could open avenues to earlier detection and intervention for people with the illness.

While schizophrenia patients are known to have abnormalities in language and in eye movements, until recently reading ability was believed to be unaffected. That is because most previous studies examined reading in schizophrenia using single-word reading tests, the McGill researchers conclude. Such tests aren’t sensitive to problems in reading fluency, which is affected by the context in which words appear and by eye movements that shift attention from one word to the next.

The McGill study, led by Ph.D. candidate Veronica Whitford and psychology professors Debra Titone and Gillian A. O’Driscoll, monitored how people move their eyes as they read simple sentences. The results, which were first published online last year, appear in the February issue of the Journal of Experimental Psychology: General.

Eye movement measures provide clear and objective indicators of how hard people are working as they read. For example, when struggling with a difficult sentence, people generally make smaller eye movements, spend more time looking at each word, and spend more time re-reading words. They also have more difficulty attending to upcoming words, so they plan their eye movements less efficiently.

“Our findings suggest that measures of reading difficulty, combined with other information such as family history, may help detect people in the early stages of schizophrenia, and thereby enable earlier intervention,” Whitford says.

Experts Emphasize the Role of Wellbeing in Human Health

Notes about this Schizophrenia research

Other co-authors on the study are Christopher C. Pack of the Montreal Neurological Institute and Ridha Joober and Ashok Malla of McGill’s Department of Psychiatry and the Douglas Mental Health University Institute.