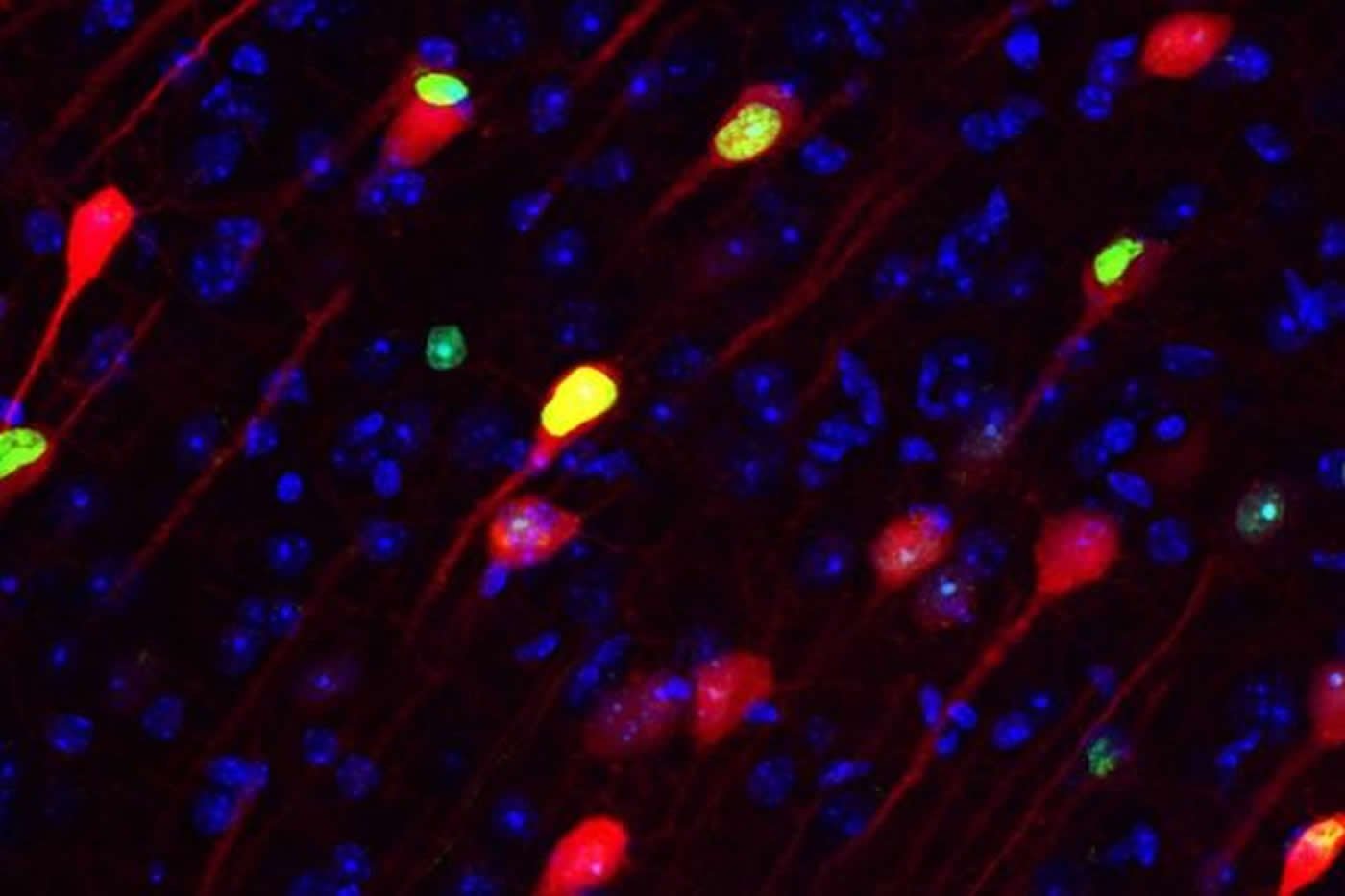 Memory engram cells labeled green and red in the prefrontal cortex of a mouse. Image is credited to Takashi Kitamura/MIT Picower Institute.

Engrams emerging as the basic unit of memory

Though scientist Richard Semon introduced the concept of the “engram” 115 years ago to posit a neural basis for memory, direct evidence for engrams has only begun to accumulate recently as sophisticated technologies and methods have become available. In a new review in Science, Professors Susumu Tonegawa of The Picower Institute for Learning and Memory at MIT and Sheena Josselyn of the Hospital for Sick Children (SickKids) and the University of Toronto describe the rapid progress they and colleagues have been making over the last dozen years in identifying, characterizing and even manipulating engrams, as well as the major outstanding questions of the field.

Experiments in rodents have revealed that engrams exist as multiscale networks of neurons. An experience becomes stored as a potentially retrievable memory in the brain when excited neurons in a brain region such as the hippocampus or amygdala become recruited into a local ensemble. These ensembles combine with others in other regions, such as the cortex, into an “engram complex.” Crucial to this process of linking engram cells is the ability of neurons to forge new circuit connections, via processes known as “synaptic plasticity” and “dendritic spine formation.” Importantly, experiments show that the memory initially stored across an engram complex can be retrieved by its reactivation but may also persist “silently” even when memories cannot be naturally recalled, for instance in mouse models used to study memory disorders such as early stage Alzheimer’s disease.

“More than 100 years ago Semon put forth a law of engraphy,” wrote Josselyn, Senior Scientist at SickKids, Professor of Psychology and Physiology at the University of Toronto and Senior Fellow in the Brain, Mind & Consciousness Program at the Canadian Institute for Advanced Research, (CIFAR) and Tonegawa, Picower Professor of Biology and Neuroscience at the RIKEN-MIT Laboratory for Neural Circuit Genetics at MIT and Investigator of the Howard Hughes Medical Institute. “Combining these theoretical ideas with the new tools that allow researchers to image and manipulate engrams at the level of cell ensembles facilitated many important insights into memory function.”

“For instance, evidence indicates that both increased intrinsic excitability and synaptic plasticity work hand in hand to form engrams and that these processes may also be important in memory linking, memory retrieval, and memory consolidation.”

Is Everything We Think We Know About Alzheimer’s Wrong?

For as much as the field has learned, Josselyn and Tonegawa wrote, there are still important unanswered questions and untapped potential applications: How do engrams change over time? How can engrams and memories be studied more directly in humans? And can applying knowledge about biological engrams inspire advances in artificial intelligence, which in turn could feedback new insights into the workings of engrams?

Original Research: The findings will appear in Science.