Almost 10% of the world population suffers dyslexia. Establishing an early diagnosis would allow the development of training programs to palliate this disorder. We now may be nearer to reaching this goal thanks to a study carried out by the Basque Centre on Cognition, Brain and Language (BCBL), associating auditory processing in children to their reading skills. The results offer a new approach for detecting the risk before the children learn to read.

Difficulty recognising words, decoding and writing problems, limitation of reading comprehension, etc..these are the main consequences of dyslexia, a cognitive disorder of neurological origin in which a late diagnosis is the main handicap.

A study led by investigators of the Basque Centre on Cognition, Brain and Language (BCBL) has demonstrated a relationship between the capacity of children to learn how to read and their hearing ability.

This breakthrough, published in Frontiers in Psychology, casts light upon the detection of the disorder and could help establish the risk of dyslexia from an early stage, as well as develop training programmes to palliate reading limitations on a preemptive basis.

“The capacity of children to listen and process language is a decisive factor in learning to read”, explains Paula Ríos-López, the supervisor of the study and a research member of the BCBL. At present, we must wait for children to reach 9 years of age in order to diagnose dyslexia.

However, the results of the San Sebastián centre imply that measurement of hearing capacity in children from a very early age may allow us to identify those individuals that might have reading problems and therefore be more susceptible to dyslexia.

Furthermore, different training activities could be implemented before 9 years of age, based on prosody (accents, tone and intonation) and language rhythms, together with programmes designed to palliate reading difficulties.

The aim is to improve reading skills and avoid future disorders. “For example, we could make an activity as simple as playing a drum improve the rhythmic skills of the child with the purpose of gradually improving language perception and avoiding future disorders”, underscores Ríos-López.

The importance of rhythm

The study has been carried out in 40 children in the second and fifth primary school grades. In order to demonstrate the relationship between the ability to learn how to read and hearing capacity, the subjects were exposed to a pseudo-word (an invented word without meaning), which the children were required to repeat verbally when asked about it. 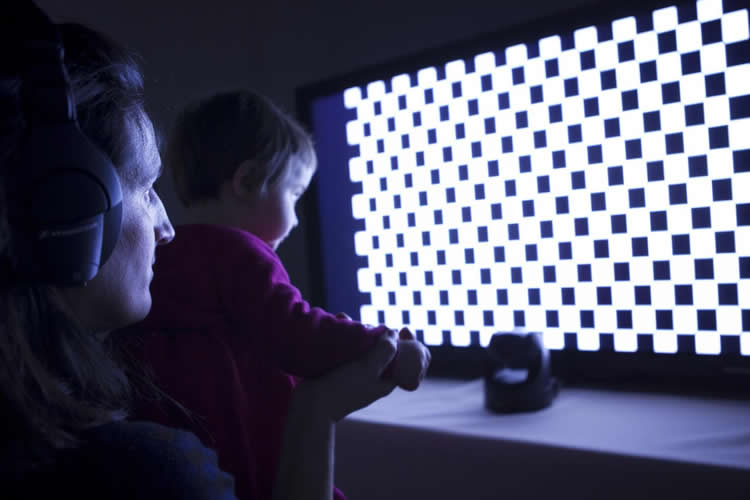 This new study reveals the relationship between the capacity of children to learn how to read and their hearing ability. NeuroscienceNews.com image is credited to BCBL.

The experiment showed that this word was better understood when preceded by phrases produced only with prosodic information, i.e., in which the information only consisted of rhythms and intonations, with no phonemes of any kind.

As explained by the expert, those children that yielded poorer scores in the reading skill test were those that received most help from the phrase with prosodic information to successfully understand and repeat the pseudo-word.

In this sense, children that do not optimally process low frequency sounds (tones, accents and intonations of speech) have greater difficulty correctly decoding phonemes and words – and this in turn is directly correlated to reading capacity and its possible disorders.

“Rhythm offers the brain the key to focalising auditory attention in moments when information relevant to speech perception appears”, explains Ríos-López. “When the brain predicts the appearance of such information, an excitable state is produced, with the recruitment of neurons destined to adapt to it”, she concludes.

This study examined the putative link between the entrainment to the slow rhythmic structure of speech, speech intelligibility and reading by means of a behavioral paradigm. Two groups of 20 children (Grades 2 and 5) were asked to recall a pseudoword embedded in sentences presented either in quiet or noisy listening conditions. Half of the sentences were primed with their syllabic and prosodic amplitude envelope to determine whether a boost in auditory entrainment to these speech features enhanced pseudoword intelligibility. Priming improved pseudoword recall performance only for the older children both in a quiet and a noisy listening environment, and such benefit from the prime correlated with reading skills and pseudoword recall. Our results support the role of syllabic and prosodic tracking of speech in reading development.