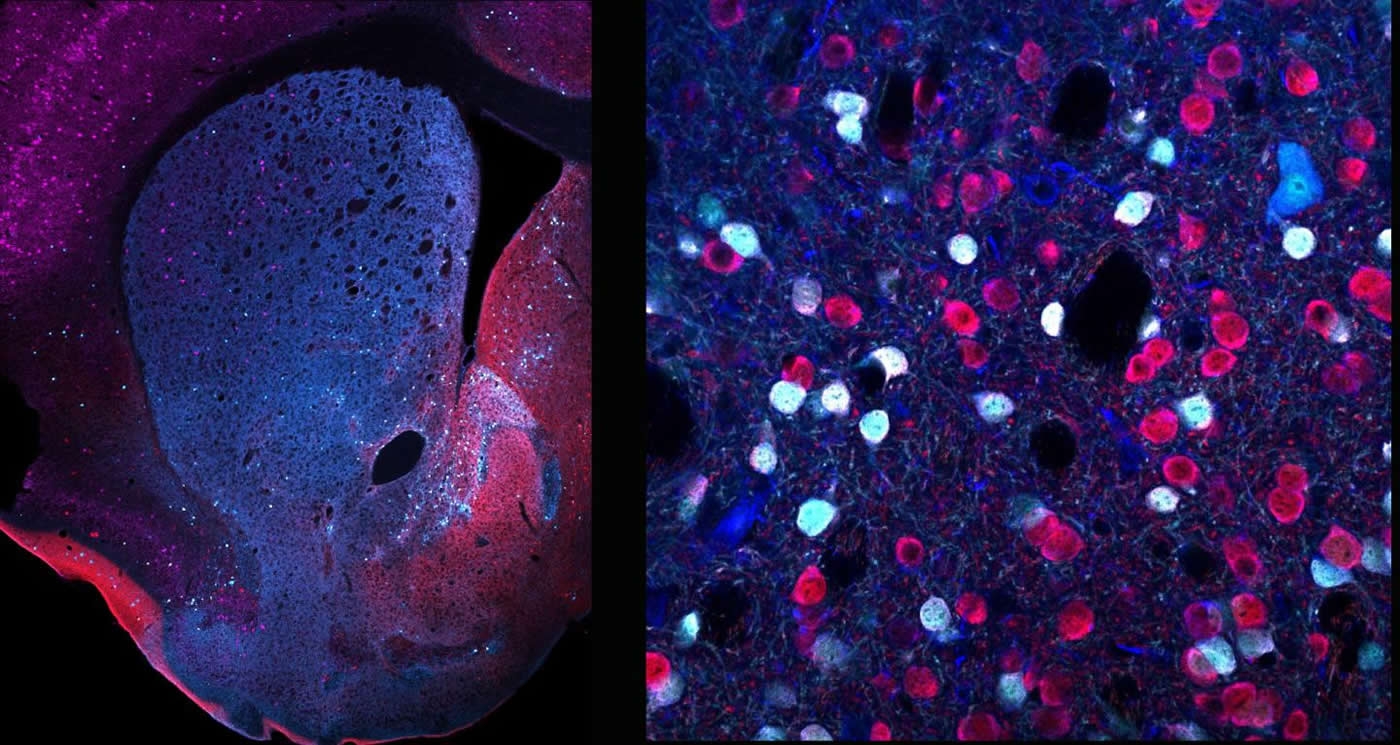 Neuronal diversity in the striatum: Coronal view of a mouse striatum (including the dorsal striatum and the nucleus accumbens) where different neuronal types are stained (left) and high magnification image showing the high diversity of neuronal populations within the striatum (right). Image is credited to INC-UAB.

Summary: Dopamine receptors have different molecular features and functions depending on their anatomical location within the striatum. The findings could help develop better-targeted treatments for a range of disorders from schizophrenia to Parkinson’s disease.

An international collaboration, which included the involvement of the research team from the Institut de Neurociències of the UAB (INC-UAB), has shown that neurons expressing dopamine D2 receptors have different molecular features and functions, depending on their anatomical localization within the striatum. This research, conducted with mouse models and published in Nature Communications, opens the door to develop better treatments for diseases in which dopamine is altered, such as schizophrenia, addictions and Parkinson’s disease.

The striatum is a brain region involved in motor control, habit formation, decision-making, motivation and reinforcement, among other aspects, and its disfunction has been associated with many neurological and psychiatric disorders. One of the most important neurotransmitters in the striatum is dopamine, which exerts different functions depending on the kind of receptor it binds to.

This study has focused on D2 receptors, and has shown that, contrary to paradigm, not all D2 neurons within the striatum have the same molecular identify or function, but that their neuro-anatomical localization is key. Researchers identified hundreds of novel region-specific molecular markers, which may serve as tools to target selective subpopulations.

“These results show that there is significant molecular and functional heterogeneity of neuronal populations in the striatum. If we know them better, we will be able to be more selective in the design of treatments for diseases in which dopamine levels are altered, such as in schizophrenia or Parkinson’s disease”, says Emma Puighermanal-Puigvert, first author of the article. “The more specific we are with our therapeutic target, the less secondary effects will appear”. The work was conducted by an international collaboration of researchers in which Albert Quintana and Elisenda Sanz, from the INC-UAB, also participated.

Using cutting-edge technologies, they analyzed mouse models to see what genes are expressed in D2 neurons from the two main areas of the striatum: the ventral striatum, consisting mainly of the nucleus accumbens, and the dorsal striatum, and revealed overwhelming differences among them. Thus, depending on their precise anatomical location, they express different kinds of proteins, changing neurons’ features and functions.

In this research, scientists also focused on a group of neurons mainly located in the accumbens, which express the protein WFS1, and studied the effects of deleting their D2 receptors. What they observed was a significant reduction in digging, an innate behavior used in many species to seek or hoard food, as shelter, or to hide away from predators, whose underlying neuronal mechanisms were still unknown. Additionally, the authors found that these animals present an exacerbated hyperlocomotor response when their dopamine levels are increased through amphetamine administration, suggesting a key role of D2 receptors from WFS1 neurons in the response to psychostimulants.

Overall, this study demonstrates that there is a huge complexity and functional specificity among D2 neuron subpopulations, and reveals the possibility to manipulate them specifically to better understand their functions, in both physiological and pathological contexts.

Action control is a key brain function determining the survival of animals in their environment. In mammals, neurons expressing dopamine D2 receptors (D2R) in the dorsal striatum (DS) and the nucleus accumbens (Acb) jointly but differentially contribute to the fine regulation of movement. However, their region-specific molecular features are presently unknown. By combining RNAseq of striatal D2R neurons and histological analyses, we identified hundreds of novel region-specific molecular markers, which may serve as tools to target selective subpopulations. As a proof of concept, we characterized the molecular identity of a subcircuit defined by WFS1 neurons and evaluated multiple behavioral tasks after its temporally-controlled deletion of D2R. Consequently, conditional D2R knockout mice displayed a significant reduction in digging behavior and an exacerbated hyperlocomotor response to amphetamine. Thus, targeted molecular analyses reveal an unforeseen heterogeneity in D2R-expressing striatal neuronal populations, underlying specific D2R’s functional features in the control of specific motor behaviors.