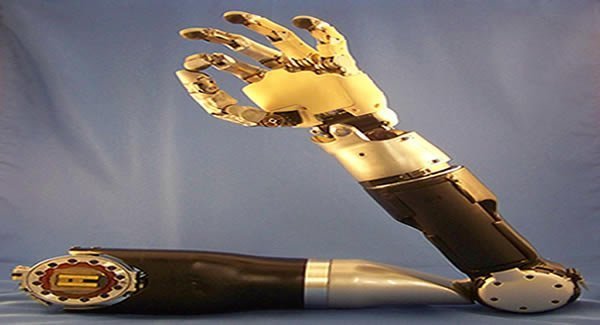 Thought control of prosthetic limbs via brain-controlled interfaces will be tested and developed with funding from DARPA. Human subjects will test neural interface systems used to control prosthetic limbs. The Modular Prosthetic Limb system that will be tested has extremely high dexterity and agility with capabilities of moving individual fingers by thought. This phase of testing will introduce the possibility of sensory feedback from the prosthetic limbs to the brain.

The Defense Advanced Research Projects Agency (DARPA) has awarded a contract for up to $34.5 million to The Johns Hopkins University Applied Physics Laboratory (APL) in Laurel, Md., to manage the development and testing of the Modular Prosthetic Limb (MPL) system on human subjects, using a brain-controlled interface.

APL scientists and engineers developed the underlying technology under DARPA’s Revolutionizing Prosthetics 2009 program, an ambitious four-year effort to create a prosthetic arm that would by far eclipse the World War II era hook-and-cable device used by most amputees. The program has already produced two complex prototypes, each advancing the art of upper-arm prosthetics.

The final design — the MPL — offers 22 degrees of motion, including independent movement of each finger, in a package that weighs about nine pounds (the weight of a natural limb). Providing nearly as much dexterity as a natural limb, the MPL is capable of unprecedented mechanical agility and is designed to respond to a user’s thoughts.

“We’ve developed the enabling technologies to create upper-extremity prosthetics that are more natural in appearance and use, a truly revolutionary advancement in prosthetics,” said APL’s Michael McLoughlin, the program manager. “Now, in Phase 3, we are ready to test it with humans to demonstrate that the system can be operated with a patient’s thoughts and that it can provide that patient with sensory feedback, restoring the sensation of touch.”

The team will develop implantable micro-arrays used to record brain signals and stimulate the brain. They will also conduct experiments and clinical trials to demonstrate the ability to use implantable neural interfaces safely and effectively to control a prosthesis, and optimize arm control and sensory feedback algorithms that enable dexterous manipulation through the use of a neuro-prosthetic limb.

Both Pittsburgh and CalTech have conducted research using chips with hair-like electrodes to record neurological signatures in the brain. Last year, in an independent effort, Pittsburgh showed that a pair of macaque monkeys with tiny chips implanted in their brains could operate a robotic arm just by thinking about it. Wires carried the signals through the skull, and then computer software converted these signals into robotic arm movements.

Within the year, the APL-led team will initiate testing with a high spinal cord injury patient. “Initially, we have targeted the quadriplegic patient population because they have the most to gain,” McLoughlin explained. “Unlike most amputee patients who have other options in terms of care and independence, these patients are totally dependent on others for most things. There is no alternative. Their lives will be truly transformed by this advancement.”

Over the next two years, the team hopes to test the systems and neural interface technology in five patients.

Whereas Pittsburgh and CalTech are exploring innovative ways to record information from the brain, the University of Chicago’s research will focus on closing the loop by stimulating the brain to sense pressure and touch. “The goal is to enable the user to more effectively control movements to perform everyday tasks, such as picking up and holding a cup of coffee,” McLoughlin said.

The University of Utah, along with the Salt Lake City-based Blackrock Microsystems, is researching and developing advanced electrode technology for brain signal recording and stimulation. Innovative electrode designs are the enabling technology that will provide the means to control the prosthetic arm through the patient’s thoughts.

Finally, the Solon, Ohio-based HDT Engineered Technologies, which designed and manufactured major components of the current MPL, will enhance its capabilities and provide the limb system hardware required for this effort.

McLoughlin commented, “The results of this program will help upper-limb amputees and spinal cord injury patients, as well as others who have lost the ability to use their natural limbs, to have as normal a life as possible despite severe injuries or degenerative neurological disease.”