The most effective way to tackle debilitating diseases is to punch them at the start and keep them from growing.

Research at Michigan State University, published in the Journal of Biological Chemistry, shows that a small “molecular tweezer” keeps proteins from clumping, or aggregating, the first step of neurological disorders such as Parkinson’s disease, Alzheimer’s disease and Huntington’s disease.

The results are pushing the promising molecule toward clinical trials and actually becoming a new drug, said Lisa Lapidus, MSU associate professor of physics and astronomy and co-author of the paper.

“By the time patients show symptoms and go to a doctor, aggregation already has a stronghold in their brains,” she said. “In the lab, however, we can see the first steps, at the very place where the drugs could be the most effective. This could be a strong model for fighting Parkinson’s and other diseases that involve neurotoxic aggregation.” 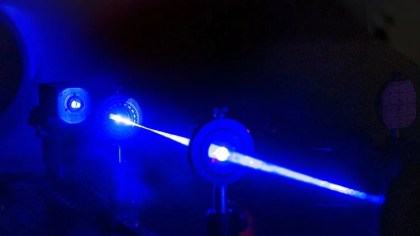 Researchers uses lasers to study the speed of protein reconfiguration before aggregation. Proteins are chains of amino acids that do most of the work in cells. Scientists understand protein structure, but they don’t know how they are built – a process known as folding. Credit Michigan State University.

Lapidus’ lab uses lasers to study the speed of protein reconfiguration before aggregation, a technique Lapidus pioneered. Proteins are chains of amino acids that do most of the work in cells. Scientists understand protein structure, but they don’t know how they are built – a process known as folding.

Srabasti Acharya, lead author and doctoral candidate in Lapidus’ lab, tested the molecule, CLR01, which was patented jointly by researchers at the University of Duisburg-Essen (Germany) and UCLA. CLR01 binds to the protein and prevents aggregation by speeding up reconfiguration. It’s like a claw that attaches to the amino acid lysine, which is part of the protein.

This work was preceded by Lapidus’ research involving the spice curcumin. While the spice molecules put the researchers on a solid path, the molecules weren’t viable drug candidates because they cannot cross the blood-brain barrier, or BBB, the filter that controls what chemicals reach the brain.

It’s the BBB, in fact, that disproves the notion that people should simply eat more spicy food to stave off Parkinson’s disease.

Spicy misconceptions notwithstanding, CLR01 mimics curcumin molecules’ ability to prevent aggregation. But unlike the spice, CLR01 can crossover the BBB and treat its targeted site. Not only do they go to the right place, but CLR01 molecules also work even better because they speed up reconfiguration even more than curcumin. Additionally Acharya showed that CLR01 slows the first step of aggregation, and the results from the study map out a clear road map for moving the drug to clinical trials.

These animations show what happens to unfolded proteins when they meet one another. If the proteins reconfigure (wiggle around) at the same rate that they collide they will stick together (green strings), which can lead to diseases such as Parkinson’s or Alzheimer’s. But if they reconfigure slower (blue) or faster (red) they are able to escape sticking. Some small molecules can stick to the protein and make them reconfigure faster to prevent sticking (changing green to red), potentially becoming drugs for these diseases. Animation by Lisa Lapidus.

Hearing about a nontraditional physics lab that was advancing medicine is what brought Acharya to work with Lapidus.

“I knew I wanted to study physics when I came to MSU, but when I heard Dr. Lapidus’ presentation during orientation, I knew this is what I wanted to do,” Acharya said. “We are using physics to better understand biology to help cure actual diseases.”

To help move the research to the next phase, Gal Bitan, co-author and professor at UCLA, is using crowdsourcing to raise funds for the clinical trials.