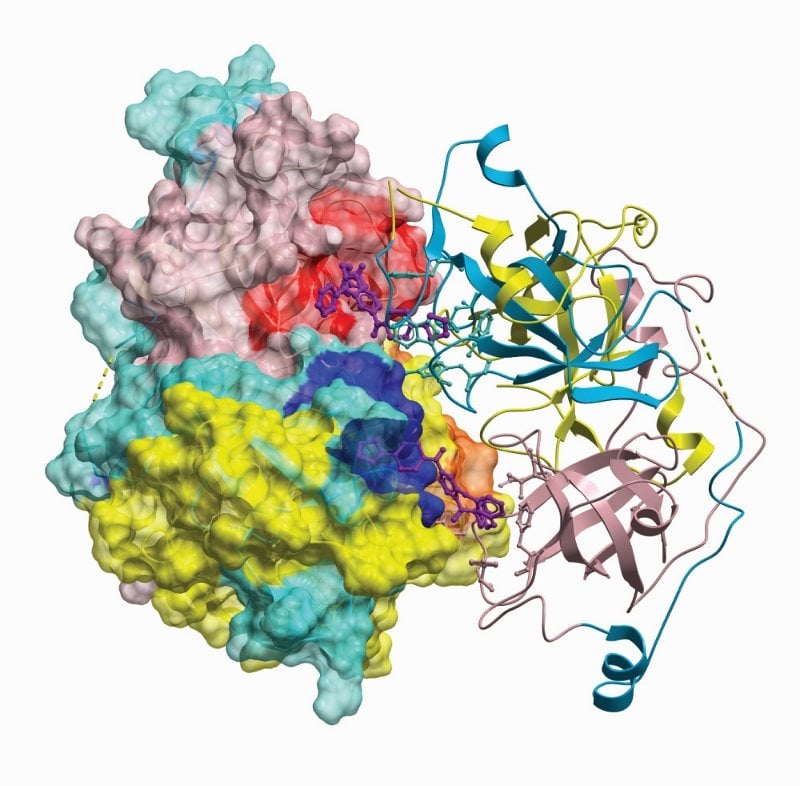 The chemical probe UNC1215 will be used to investigate the function of malignant brain tumor (MBT) domain protein, L3MBTL3, and study its role in different signaling pathways and disease. Credited to UNC.
Home
Brain Cancer

The probe, named UNC1215, will provide researchers with a powerful tool to investigate the function of malignant brain tumor (MBT) domain proteins in biology and disease.

In an article published as the cover story of the March 2013 issue of Nature Chemical Biology, Lindsey James, PhD, research assistant professor in the lab of Stephen Frye, Fred Eshelman Distinguished Professor in the UNC School of Pharmacy and member of the UNC Lineberger Comprehensive Cancer Center, announced the discovery of a chemical probe that can be used to investigate the L3MBTL3 methyl-lysine reader domain. The probe, named UNC1215, will provide researchers with a powerful tool to investigate the function of malignant brain tumor (MBT) domain proteins in biology and disease.

“Before this there were no known chemical probes for the more than 200 domains in the human genome that recognize methyl lysine. In that regard, it is a first in class compound. The goal is to use the chemical probe to understand the biology of the proteins that it targets,” said Dr. James.

Chromatin regulatory pathways play a fundamental role in gene expression and disease development, especially in the case of cancer. While many chemical probes work through the inhibition of enzyme activity, L3MBTL3 functions as a mediator of protein-to-protein interactions, which have been historically difficult to target with small, drug-like molecules.The researchers found three to four further disease subtypes within TN tumors, with more than 75 percent of the tumors falling into the basal-like subtype. Further research is needed to identify the distinct biomarkers shared by the expanded subtypes of TN cancers. The ultimate goal will be to target the individual biomarkers of these subtypes and create therapies that target their individual biology, according to Dr. Perou.

“Many people believe that protein-protein interactions are difficult to target. Often they have a large surface area, so it is hard for small molecules to go in and intervene,” said Dr. James.

Almost 40 percent of the genes that drive cancer can be mapped to dysfunction within signaling pathways. In the last five years, chemical probe development has allowed researchers to make fundamental observations of the role of these pathways in cancer development, as well as pointing to potential targets for new therapies. Each of the complex interactions within the signaling pathways represents a potential point where a therapy can be applied, and the probes allow researchers to interact with these processes at the molecular level and observe the overall effect of their perturbation on the disease state.

In a 2008 Nature Chemical Biology commentary, Dr. Frye outlined the qualities that make a good chemical probe. To Frye, a good chemical probe must be highly selective to enable specific questions to be asked and it must function as well in a cell as in the test tube, providing clear quantitative data with a well understood mechanism of action in either situation. It also must be available to all academic researchers without restrictions on its use, a criteria that the L3MBTL3 probe fulfills through the Frye lab’s commitment to provide researchers with the probe free of charge on request and UNC1215 is already available through commercial vendors as well.

Babies know when you imitate them, and like it

This research was supported by NIH grants (RC1GM090732 and R01GM100919) and the University Cancer Research Fund.