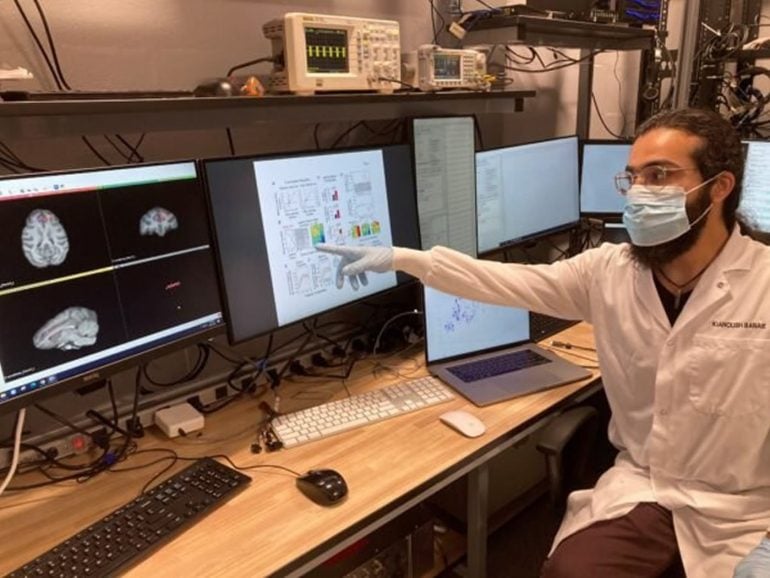 Summary: A group of neurons located in the basal ganglia appears to play a vital role in cognitive flexibility.

There are 86 billion neurons, or cells, in the human brain. Of these, an infinitely small portion of them handle cognitive flexibility—our ability to adjust to new environments and concepts.

A team of researchers with interdisciplinary expertise in psychology, informatics (the application of information science to solve problems with data) and engineering along with the Vanderbilt Brain Institute (VBI) gained critical insights into one of the biggest mysteries in neuroscience, identifying the location and critical nature of these neurons.

The article was published in the journal Proceedings of the National Academy of Science (PNAS) on July 13. The discovery presents an opportunity to enhance researchers’ understanding and treatment of mental illnesses rooted in cognitive flexibility.

Brain circuits created by these neurons have led to an evolutionary advantage in the ability of humans to adapt to changing environments. When these neurons are weakened, people may have trouble adjusting to changes in their environment including difficulty in overcoming traditions, biases and fears. Typically, people oscillate between repeating rewarding behavior and exploring newer and potentially better rewards. The cost-benefit ratio of repeating to exploring is an equation that the brain is constantly working to resolve, particularly when there are changes to a person’s environment. A lack of cognitive flexibility results in debilitating mental conditions.

The consequences of this research could be multifold. “These cells could be part of the switch that determines your best attentional strategy,” said Thilo Womelsdorf, associate professor of psychology and computer science, and the paper’s principal investigator. “Weakening these brain cells could make it difficult to switch attention strategies, which can ultimately result in obsessive-compulsive behaviors or a struggle to adjust to new situations. On the opposite end, if such a switch is ‘loose’ attention might become ‘loose’ and people will experience a continuously uncertain world and be unable to concentrate on important information for any amount of time.”

The researchers hypothesized that within the area of the brain that helps people learn fine motor skills like playing an instrument, there exists a subregion that could enable the same flexible processes for thoughts.

The group of brain cells, located below the outer cortical mantle in the basal ganglia, were identified by measuring the activity of brain cells during computer-simulated real-world tasks. To mimic many real-world situations the researchers, including scientists from the Centre for Vision Research at York University, developed a simulation to present more than one object at a time and changed what was rewarded. This created flexible learning as to which objects are linked to a reward through trial-and-error. By measuring the activity of brain cells, the team observed an interesting pattern: brain cell activity was heightened amid change and diminished when confidence in the outcome grew. “These neurons seem to help the brain circuits to reconfigure and transition from formerly relevant information, and a tenuous connection to attend to new, relevant information,” said Kianoush Banaie Boroujeni, the study’s first author and Ph.D. candidate in the Womelsdorf lab.

“There is a technological revolution in neuroscience,” said Lisa Monteggia, Barlow Family Director of the Vanderbilt Brain Institute and professor of pharmacology. “The ability to use technology to control a single cell with molecular and genetic tools can only work when scientists know where to look. Dr. Womelsdorf and his collaborators have given us the ability to do such work and significantly move the field of neuroscience forward.”

Cognitive flexibility depends on a fast neural learning mechanism for enhancing momentary relevant over irrelevant information. A possible neural mechanism realizing this enhancement uses fast spiking interneurons (FSIs) in the striatum to train striatal projection neurons to gate relevant and suppress distracting cortical inputs. We found support for such a mechanism in nonhuman primates during the flexible adjustment of visual attention in a reversal learning task. FSI activity was modulated by visual attention cues during feature-based learning. One FSI subpopulation showed stronger activation during learning, while another FSI subpopulation showed response suppression after learning, which could indicate a disinhibitory effect on the local circuit. Additionally, FSIs that showed response suppression to learned attention cues were activated by salient distractor events, suggesting they contribute to suppressing bottom-up distraction. These findings suggest that striatal fast spiking interneurons play an important role when cues are learned that redirect attention away from previously relevant to newly relevant visual information. This cue-specific activity was independent of motor-related activity and thus tracked specifically the learning of reward predictive visual features.