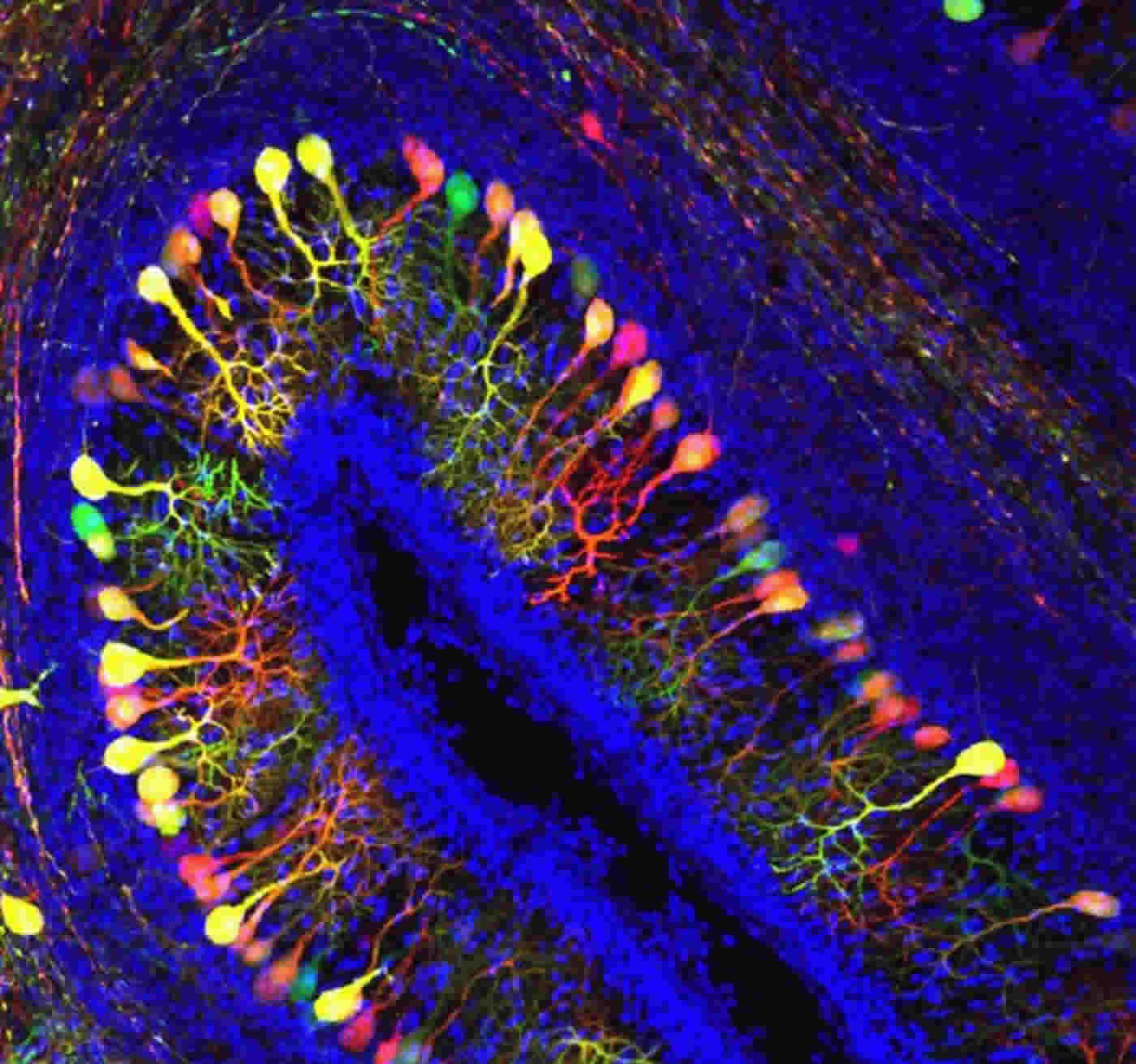 A cross-section of the folded cerebellar cortex or 'little brain' of a chicken embryo, with three layers of cells. The middle layer consists of Purkinje cells with their characteristic dendritic branches. This image shows healthy Purkinje cells, highlighted in bright colours. With a deactivated MCT8 transporter, the Purkinje cells would have much smaller dendritic branches. NeuroscienceNews.com image is credited to KU Leuven Lab of Comparative Endocrinology - Joke Delbaere & Pieter Vancamp.

Transporter of Thyroid Hormones is Crucial For Embryonic Brain Development

Summary: Researchers report on the importance of thyroid hormones in the development of the cerebellum.

Thyroid hormones control our everyday metabolism, but they’re already crucial before birth: they are essential for the development of the organs, including the brain. “These hormones ensure that different cell types originate in the brain at the right moment, move to the right place, and make the right connections,” explains Professor Veerle Darras from the Lab of Comparative Endocrinology at KU Leuven. “Until the thyroid is fully developed, a foetus depends on the mother’s hormones. If the mother-to-be doesn’t produce enough thyroid hormones, this has a negative impact on the brain development of the foetus from a very early stage.”

Determining whether the thyroid is properly functioning is typically done by measuring the amount of hormones in the blood. Unfortunately, this is not always a good indicator. “This proved to be the case with the rare Allan-Herndon-Dudley syndrome (AHDS), a hereditary condition of the nervous system that only affects boys. These children suffer from severe mental retardation and locomotor deficits. Doctors looked for possible thyroid hormone deficiencies but, surprisingly, the level of hormones in the blood was abnormally high. The problem turned out to be in the transporters that bring the hormones from the blood to the inside of the cell. Due to a genetic mutation an important transporter – MCT8 – is deactivated in patients with AHDS.”

To find out more about this mutation Professor Darras’s team examined what happens in a chicken embryo when this transporter is deactivated in a part of the little brain, PhD student Pieter Vancamp continues. “The little brain is important for locomotion. A thyroid hormone deficiency impairs its development, but the role of the transporters was not yet known. In our study, we noticed relatively quickly that some important proteins – necessary for the development of brain cells – were not produced in sufficient amounts in the part of the brain with no active transporter. In a later stage, we noticed that the Purkinje cells – nerve cells located in the cortex of the little brain – have less dendritic branches. Therefore, brain cell signalling goes haywire, and problems arise in other cells as well.”

The results show that thyroid hormones are essential for embryonic development right from the start. “The earlier things go wrong, the harder it is to repair the damage after birth. Newborns are always screened for thyroid problems with the heel prick, but it’s better to test the mothers-to-be as early as possible. Unfortunately, this does not yet happen in all hospitals. For the Allan-Herndon-Dudley syndrome, in particular, our study raises questions about possible prenatal treatments with variants of thyroid hormones: these can enter the cell without the transporter. But this is still an experimental treatment – one that is only being tested after birth.”

Inactivating mutations in the human SLC16A2 gene encoding the thyroid hormone transporter monocarboxylate transporter 8 (MCT8) result in the Allan–Herndon–Dudley syndrome accompanied by severe locomotor deficits. The underlying mechanisms of the associated cerebellar maldevelopment were studied using the chicken as a model. Electroporation of an MCT8-RNAi vector into the cerebellar anlage of a 3-day-old embryo allowed knockdown of MCT8 in Purkinje cell precursors. This resulted in the downregulation of the thyroid hormone-responsive gene RORα and the Purkinje cell-specific differentiation marker LHX1/5 at day 6. MCT8 knockdown also results in a smaller and less complex dendritic tree at day 18 suggesting a pivotal role of MCT8 for cell-autonomous Purkinje cell maturation. Early administration of the thyroid hormone analogue 3,5,3′-triiodothyroacetic acid partially rescued early Purkinje cell differentiation. MCT8-deficient Purkinje cells also induced non-autonomous effects as they led to a reduced granule cell precursor proliferation, a thinner external germinal layer and a loss of PAX6 expression. By contrast, at day 18, the external germinal layer thickness was increased, with an increase in presence of Axonin-1-positive post-mitotic granule cells in the initial stage of radial migration. The concomitant accumulation of presumptive migrating granule cells in the molecular layer, suggests that inward radial migration to the internal granular layer is stalled. In conclusion, early MCT8 deficiency in Purkinje cells results in both cell-autonomous and non-autonomous effects on cerebellar development and indicates that MCT8 expression is essential from very early stages of development, providing a novel insight into the ontogenesis of the Allan–Herndon–Dudley syndrome.