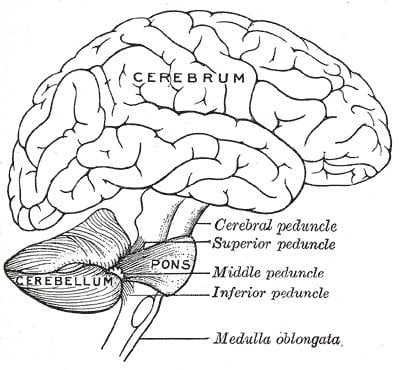 Caused by lesions in the part of the brain responsible for coordination and balance, cerebellar ataxia can begin with difficulty walking or speaking and progress to complete disability of those functions. The image is a drawing of the human brain, showing cerebellum and pons.
Home
Featured

Researchers from Massachusetts General Hospital (MGH) and Duke University have identified genetic mutations that appear to underlie a rare but devastating syndrome combining reproductive failure with cerebellar ataxia – a lack of muscle coordination – and dementia. In a paper that will appear in the May 23 New England Journal of Medicine and is receiving early online release, the investigators describe finding mutations in one or both of two genes involved in a cellular process called ubiquitination in affected members of five unrelated families.

“This study highlights, for the first time, the importance of the ubiquitin system in a syndrome characterized by ataxia and hypogonadotropic hypogonadism – reproductive failure due to abnormal signaling from the brain or pituitary gland,” says Stephanie Seminara, MD, of the Reproductive Endocrine Unit in the MGH Department of Medicine, co-senior author of the report. “It also demonstrates how combining robust genomics with detailed functional assays can unlock complex genetic architecture.”

Caused by lesions in the part of the brain responsible for coordination and balance, cerebellar ataxia can begin with difficulty walking or speaking and progress to complete disability of those functions. Genes associated with several syndromes characterized by ataxia have been identified, but none had previously been associated with the rare combination of ataxia and reproductive failure, which was first described more than 100 years ago. Several such patients have been referred to the MGH Reproductive Endocrine Unit, including a Palestinian family with several affected members who also developed dementia.

Seminara notes that, while ataxia and hypogonadotropic hypogonadism each may have several possible genetic causes, the combination of both conditions is so rare that it is more likely to be caused by mutations in a particular gene or related genes. In collaboration with researchers from the Center for Human Disease Modeling at Duke directed by Nicholas Katsanis, PhD, co-senior author of the NEJM article – her team conducted whole-exome sequencing of DNA from an affected member of the Palestinian family. That screening found rare variants in both copies of 13 genes, and two of those variants were also found in samples from the patient’s two affected siblings but not in several unaffected family members.

Both of the mutated genes are involved in ubiquitination, a process by which cellular proteins are marked for degredation by a protein called ubiquitin. One of them, RNF216, codes for an enzyme that attaches ubiquitin to the protein; the other, OTUD4, codes for a protein that removes ubiquitin. The researchers then sequenced both of these proteins in samples from an additional nine affected individuals from seven different families. They found that one of those individuals had two different RNF216 mutations, four others – two in the same family – had mutations in a single copy of that gene, but none had mutated versions of OTUD4.

To get a better idea of the functional consequences of mutations in these two genes, the researchers disrupted their expression in zebrafish and found that blocking either RNF216 or OTUD4 caused disorganization of the cerebellum and reduced the size of eyes and a portion of the midbrain. The abnormalities were even greater when both genes were blocked but could be eliminated if production of the relevant proteins was induced by the introduction of the corresponding human RNA.

“The presence of RNF216 mutations in several familes made its role in causing this syndrome clear, but finding OTUD4 mutation in only one family raised the question of whether it actually contributed to the disease or was just an ‘innocent bystander’,” says Katsanis. “The zebrafish work provided critical evidence that both genes function in a common pathway, since blocking either of them produced similar effects. And the fact that blocking both genes had a synergistic effect lends further evidence to the two genes’ operating in the same pathway and to the contribution of OTUD4 mutations to this syndrome.”

Although exactly how these mutations lead to the symptoms seen in these individuals is unknown, the researchers note that identifying these genes may someday lead to therapies – potentially including drugs currently being developed for other disorders involving ubiquitination, including Parkinson’s disease – and enable genetic screening and counseling for affected families. They also hope to investigate whether less severe mutations in these genes may contribute to the presence of ataxia, dementia or hypogonadism in isolation.

Notes about this neurogenetics and cerebellar ataxia research

Seminara is an assistant professor of Medicine at Harvard Medical School, and Katsanis is the Jean and George W. Brumley Professor of Cell Biology and Pediatrics at Duke University Medical Center. The co-lead authors of the NEJM report are David Margonin, MD, PhD, MGH Department of Neurology; Maria Kousi, PhD, Duke Center for Human Disease Modeling; and Yee-Ming Chan, MD, PhD, MGH Reproductive Endocrine Unit and Boston Children’s Hospital. The study was supported by National Institute for Child Health and Human Development grants R01 HD043341, R01 HD042601 and U54 HD028138 and by other National Institutes of Health grants.