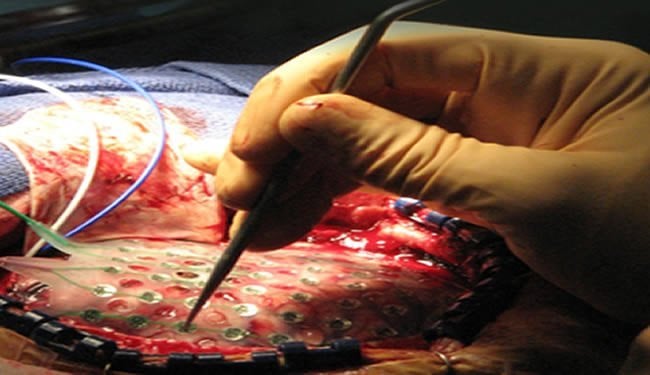 Patients with a temporary surgical implant have used regions of the brain that control speech to “talk” to a computer for the first time, manipulating a cursor on a computer screen simply by saying or thinking of a particular sound.

“There are many directions we could take this, including development of technology to restore communication for patients who have lost speech due to brain injury or damage to their vocal cords or airway,” says author Eric C. Leuthardt, MD, of Washington University School of Medicine in St. Louis.

Scientists have typically programmed the temporary implants, known as brain-computer interfaces, to detect activity in the brain’s motor networks, which control muscle movements.

“That makes sense when you’re trying to use these devices to restore lost mobility — the user can potentially engage the implant to move a robotic arm through the same brain areas he or she once used to move an arm disabled by injury,” says Leuthardt, assistant professor of neurosurgery, of biomedical engineering and of neurobiology, “But that has the potential to be inefficient for restoration of a loss of communication.”

Patients might be able to learn to think about moving their arms in a particular way to say hello via a computer speaker, Leuthardt explains. But it would be much easier if they could say hello by using the same brain areas they once engaged to use their own voices.

The research appears April 7 in The Journal of Neural Engineering.

The devices under study are temporarily installed directly on the surface of the brain in epilepsy patients. Surgeons like Leuthardt use them to identify the source of persistent, medication-resistant seizures and map those regions for surgical removal. Researchers hope one day to install the implants permanently to restore capabilities lost to injury and disease.

Leuthardt and his colleagues have recently revealed that the implants can be used to analyze the frequency of brain wave activity, allowing them to make finer distinctions about what the brain is doing. For the new study, Leuthardt and others applied this technique to detect when patients say or think of four sounds:

When scientists identified the brainwave patterns that represented these sounds and programmed the interface to recognize them, patients could quickly learn to control a computer cursor by thinking or saying the appropriate sound.

In the future, interfaces could be tuned to listen to just speech networks or both motor and speech networks, Leuthardt says. As an example, he suggests that it might one day be possible to let a disabled patient both use his or her motor regions to control a cursor on a computer screen and imagine saying “click” when he or she wants to click on the screen.

“We can distinguish both spoken sounds and the patient imagining saying a sound, so that means we are truly starting to read the language of thought,” he says. “This is one of the earliest examples, to a very, very small extent, of what is called ‘reading minds’ — detecting what people are saying to themselves in their internal dialogue.”

The next step, which Leuthardt and his colleagues are working on, is to find ways to distinguish what they call “higher levels of conceptual information.”

“We want to see if we can not just detect when you’re saying dog, tree, tool or some other word, but also learn what the pure idea of that looks like in your mind,” he says. “It’s exciting and a little scary to think of reading minds, but it has incredible potential for people who can’t communicate or are suffering from other disabilities.”

A portion of this research was funded in collaboration with Gerwin Schalk, PhD, of the New York State Department of Health’s Wadsworth Center. The goal is to explore additional potential uses of this technology in people who are disabled and in those who are not.

Funding from the National Institutes of Health and the Department of Defense supported this research.