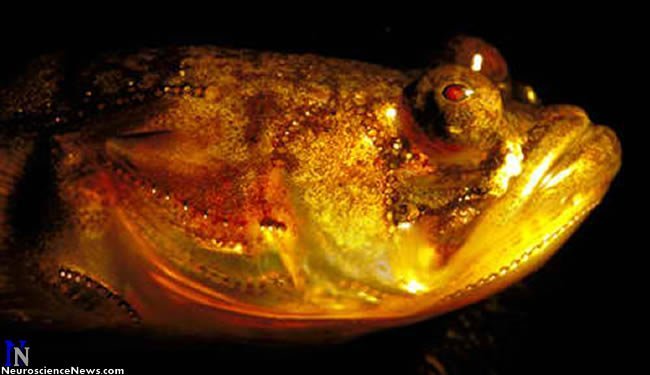 Cornell researchers have identified regions of a fish brain that reveal the basic circuitry for how all vertebrates, including humans, generate sound used for social communication.

Much like walking or swimming, to make sounds, vertebrate (animals with a backbone) brains must use timing signals to coordinate carefully the right muscles. In a study of midshipman fish, published online June 14 in Nature Communications, the researchers identified two distinct groups of neurons, part of a central pattern generator, in the hindbrain that independently control the duration and the frequency of sounds used for calling.

Specifically, the pattern generator directly coordinates and synchronizes the actions of muscles of the midshipman’s swim bladder, where the sounds are produced; this is analogous to how the human larynx or avian syrinx works. While human speech and bird songs are far more complex than the grunts and hoots of fish, the study provides a very basic wiring diagram for how the brain allows vertebrates to vocalize.

“If you can understand the simplest system, it provides a road map for understanding the fundamental working units in the central nervous system for how you build a vocal system,” said Andrew Bass, Cornell professor of neurobiology and behavior and senior author of the paper.

“It’s been relatively unknown how brains coordinate vocalization,” said Bass. “People think it’s different from walking,” in terms of patterning in the brain, “but it really works according to a similar set of rules,” he added.

The researchers used standard methods to locate the hindbrain areas that contribute to vocalizations; tiny electrodes recorded the activity of nerve cells and revealed the brain’s electrical code. Computer software then allowed the researchers to decipher the data and figure out the functions of the neurons.

In a 2008 Science paper, Bass and colleagues identified this same region of the brain in larval midshipman fish, showing how it is present in the brains of other animals, including primates. This suggests, Bass said, that the vocal networks in all vertebrates evolved from an ancestrally shared brain area that originated in fishes.

“Studies like these allow us to trace the evolutionary history of the brain,” Bass said. “All animals, including humans, share many brain circuits for complex behaviors, including the use of sounds for social communication,” he added.

Co-authors include lead author Boris Chagnaud, postdoctoral researcher in the Bass lab, and Robert Baker, a researcher at New York University’s Langone Medical Center; the authors collaborated at the Marine Biological Laboratory at Woods Hole, Mass. The study was funded by the Grass Foundation and National Institutes of Health.