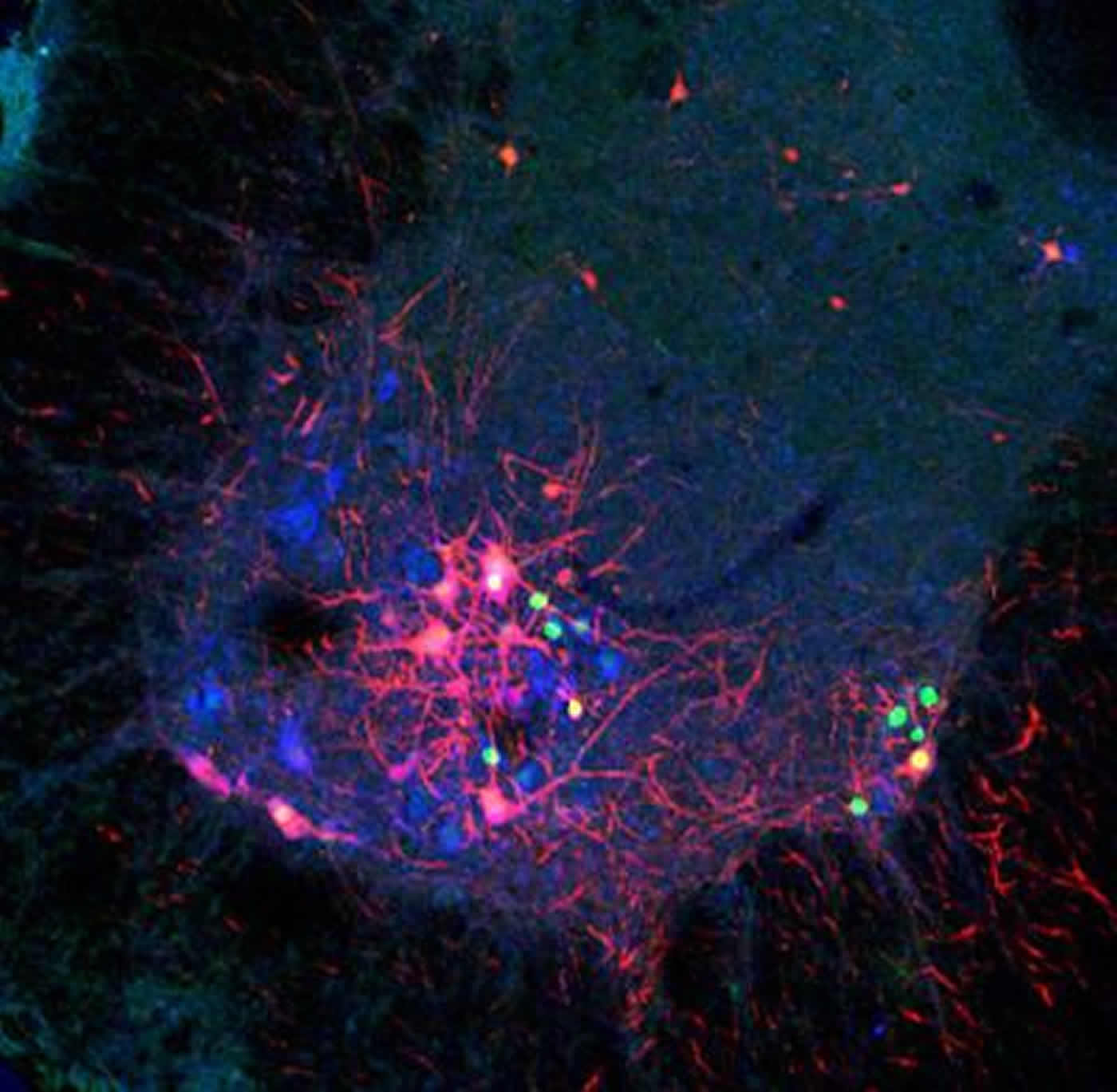 Scientists at Columbia University’s Mortimer B. Zuckerman Mind Brain Behavior Institute have developed a new viral tool that dramatically expands scientists’ ability to probe the activity and circuitry of brain cells, or neurons, in the mouse brain. These findings highlight an innovative feat of molecular engineering that allows the creation of a more complete map of the brain’s cellular circuits and will help researchers on their way toward unraveling the mysteries of the brain.

This research was reported today in the journal Neuron.

“At its core, every sensation, thought and movement depends on how the brain’s billions of neurons communicate through a complex system of circuits,” said Thomas M. Jessell, PhD, the paper’s co-senior author and a director of the Zuckerman Institute. “In this study, we developed a strain of rabies that greatly improves our ability to map these circuits, which can lend insight into how these circuits direct behavior — in health and in disease,” added Dr. Jessell, who is also the Claire Tow professor of neuroscience and of biochemistry and molecular biophysics at Columbia.

Because rabies only infects neurons, scientists have long worked to create a modified, safer version of the virus that can travel from cell to cell in the brain — lighting a path as it goes — providing a kind of visual map of connections. Researchers had struggled to find success, until eight years ago, when a team from the Salk Institute created an innovative new system.

Using the rabies strain normally reserved for inoculations, Salk researchers led by Edward Callaway found a way to control the virus’ spread by manually tweaking its ability to jump from cell to cell. This advance, while revolutionary, came with drawbacks. As an inoculation strain, this older rabies virus had evolved to kill neurons while sparing the organism. This caused neurons to die just a few days after infection — too little time to construct an adequate map of a brain circuit.

“It was like trying to draw a detailed map of New York City but you only had a minute to do so–so you were left with a woefully incomplete picture,” said Thomas Reardon, the paper’s co-first author and a doctoral candidate at Columbia University Medical Center (CUMC). “So for this study, we looked to a different version of the virus, which would allow neurons to live much longer.”

Working with acclaimed virologist Matthias Schnell, PhD, and his team at Thomas Jefferson University, the scientists took this strain of rabies and essentially neutered the virus so that it would still spread but without killing the organism. Using this new strain, neurons in the mouse brain lived for more than a month, allowing a greater window of time than ever before in which to map the circuit. The team could then direct the viral infection just as Salk scientists had done but without risking premature cell death.

“While this strain is specific to the mouse brain, the applications for this advance are far-reaching,” said Attila Losonczy, MD, PhD, an assistant professor of neuroscience at CUMC, a principal investigator at the Zuckerman Institute and a co-senior author of this study. “For example, scientists could engineer a molecular payload, attach it to the modified rabies virus, and control specific neurons or groups of neurons”

“Ideally, we envision a strain of rabies virus that would be so safe and so malleable that we can enlist it to fight diseases of the brain,” said Andrew Murray, PhD, a postdoctoral fellow at CUMC and the co-first author of the paper. “It is our hope that scientists can improve upon our strain and transform rabies virus into a vector to fight disease.”

“Our study also speaks to a broader theme in science: that the most revolutionary scientific tools do not originate in the lab, but instead come from nature itself,” added Reardon. “Evolution has already invented the rabies virus–all we had to do was to co-opt it.”

Funding: This research was supported by the McKnight Foundation, the Brain and Behavior Research Foundation (NARSAD), the National Institutes of Health (NS0332245), Project ALS and the Howard Hughes Medical Institute.

Summary
Virally based transsynaptic tracing technologies are powerful experimental tools for neuronal circuit mapping. The glycoprotein-deletion variant of the SAD-B19 vaccine strain rabies virus (RABV) has been the reagent of choice in monosynaptic tracing, since it permits the mapping of synaptic inputs to genetically marked neurons. Since its introduction, new helper viruses and reagents that facilitate complementation have enhanced the efficiency of SAD-B19ΔG transsynaptic transfer, but there has been little focus on improvements to the core RABV strain. Here we generate a new deletion mutant strain, CVS-N2cΔG, and examine its neuronal toxicity and efficiency in directing retrograde transsynaptic transfer. We find that by comparison with SAD-B19ΔG, the CVS-N2cΔG strain exhibits a reduction in neuronal toxicity and a marked enhancement in transsynaptic neuronal transfer. We conclude that the CVS-N2cΔG strain provides a more effective means of mapping neuronal circuitry and of monitoring and manipulating neuronal activity in vivo in the mammalian CNS.