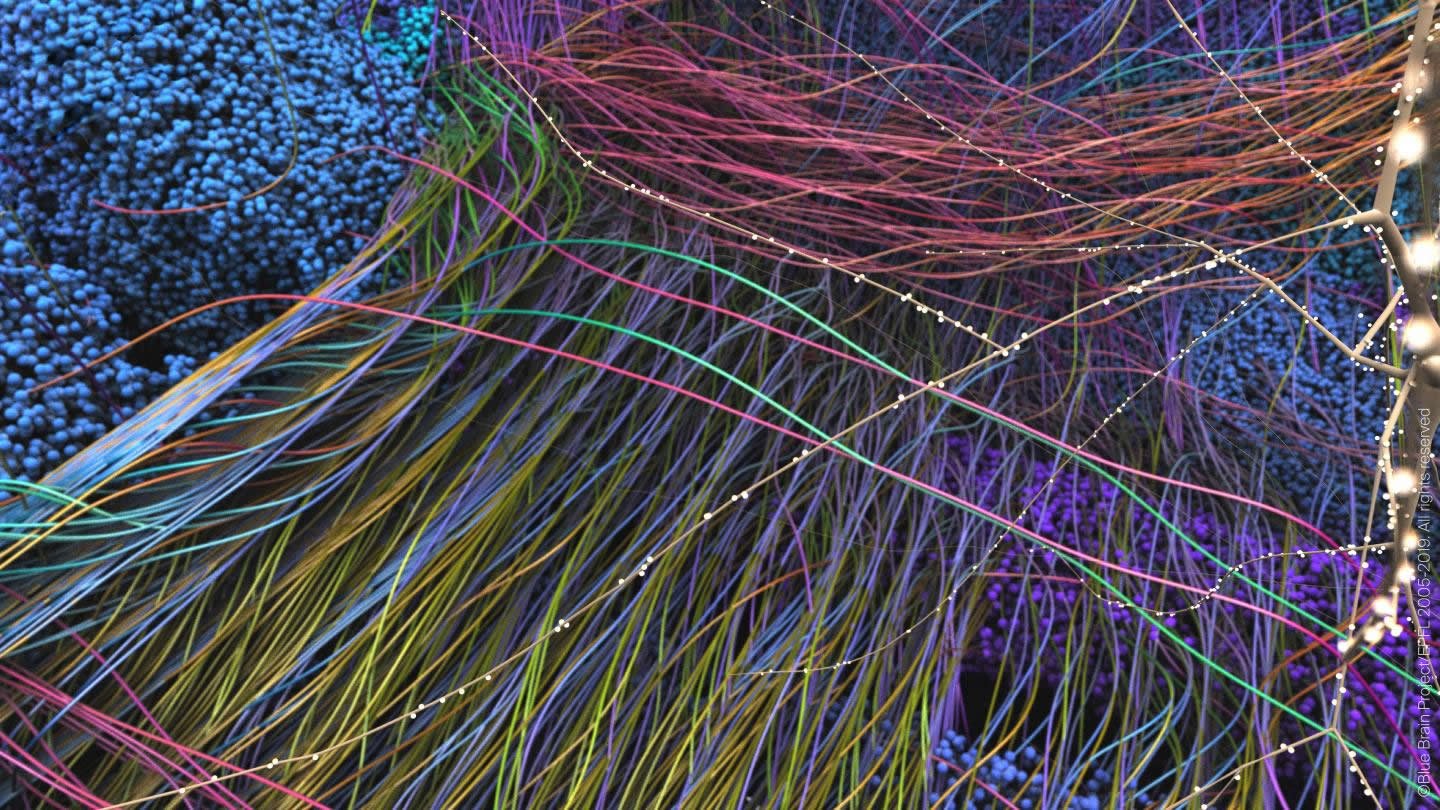 This rendering shows the density of connections in the mouse neocortex. The image is credited to Blue Brain Project / EPFL.

The structure of synaptic connections between neurons shapes their activity and function. Measuring a comprehensive snapshot of this so-called connectome has so far only been accomplished within tiny volumes, smaller than the head of a pin. For larger volumes, the long-range connectivity, formed by bundles of extremely thin but long fibers, has only been studied for small numbers of individual neurons, which is far from a complete picture. Alternatively, it has been studied at the macro-scale, a ‘zoomed-out’ view of average features that does not provide single-cell resolution.

In a paper published in Nature Communications, the Blue Brain researchers have shown that the trick lies in combining these two views. By integrating data from two recent datasets – the Allen Mouse Brain Connectivity Atlas and Janelia MouseLight – the researchers identified some of the key rules that dictate which individual neurons can form connections over large distances within the neocortex. This was possible because the two datasets complemented each other in terms of entirety of the neocortex and the cellular resolution provided.

Emergence of a surprisingly complex structure at single-cell resolution

Building on their previous work in modelling local brain circuits, the researchers were then able to parameterize these principles of neocortical connectivity and generate statistical connectome instances compatible with them. When they studied the resulting structure, they found something fascinating; at cellular resolution, a surprisingly complex structure that had so far only been seen between neighboring neurons now also tied together neurons in different regions and at opposite ends of the brain. This was comparable to a rule of self-similarity that has been previously found in the human brain (MRI data) and predicts that it extends all the way down to the level of individual neurons.

“This made me re-think how I think about these long-range connections”, reveals lead researcher Michael Reimann. “They have been depicted as these blunt cables, connecting or synchronizing whole brain regions. But maybe there is more to them, more specific targeting of individual neurons. And this is what we learned from just a few, relatively course-grained principles. I expect that with improved methods we will find more in the future.”

“We have completed such a first-draft connectome of mouse neocortex by using an improved version of our previously published circuit building pipeline (Markram et al., 2015),” explains Michael Reimann. “It has been improved to place neurons in brain-atlas defined 3d spaces instead of hexagonal prisms, taking into account the geometry and cellular composition of individual brain regions. The composition was based on data from the open source Blue Brain Cell Atlas. Further constraints were derived from other openly accessible datasets. Additional constraints that are so far unknown are likely to limit long-range connectivity even more. To start a process of iterative refinement, we made the model and data available to the public. The parameterized constraints on projection strength, mapping, layer profiles and individual axon targeting (i.e. the projection recipe), as well as stochastic instantiations of whole-neocortex micro-connectomes can be found under https://portal.bluebrain.epfl.ch/resources/models/mouse-projections“.

This openly accessible connectome can serve as a powerful null model to compare experimental findings to and as a substrate for whole-brain simulations of detailed neural networks. Sparse connection matrices of several instances of the predicted null model of neocortical long-range connectivity have also been publicly available as this result actively demonstrates the power of making datasets available to the public.

Further advancing the case for Simulation

The simulation (in-silico) method allowed the scientists to target volumes several orders of magnitude smaller, than would be possible with experimental methods (G?m?nut et al., 2018), right down to the innervation of individual neurons with sub-cellular resolution. Going forward, this will allow the simulation of the electrical activity of individual neurons, entire regions or of the entire neocortex.

“I Know This Song!” Evolutionary Keys to Musical Perception

In connectomics, the study of the network structure of connected neurons, great advances are being made on two different scales: that of macro- and meso-scale connectomics, studying the connectivity between populations of neurons, and that of micro-scale connectomics, studying connectivity between individual neurons. We combine these two complementary views of connectomics to build a first draft statistical model of the micro-connectome of a whole mouse neocortex based on available data on region-to-region connectivity and individual whole-brain axon reconstructions. This process reveals a targeting principle that allows us to predict the innervation logic of individual axons from meso-scale data. The resulting connectome recreates biological trends of targeting on all scales and predicts that an established principle of scale invariant topological organization of connectivity can be extended down to the level of individual neurons. It can serve as a powerful null model and as a substrate for whole-brain simulations.