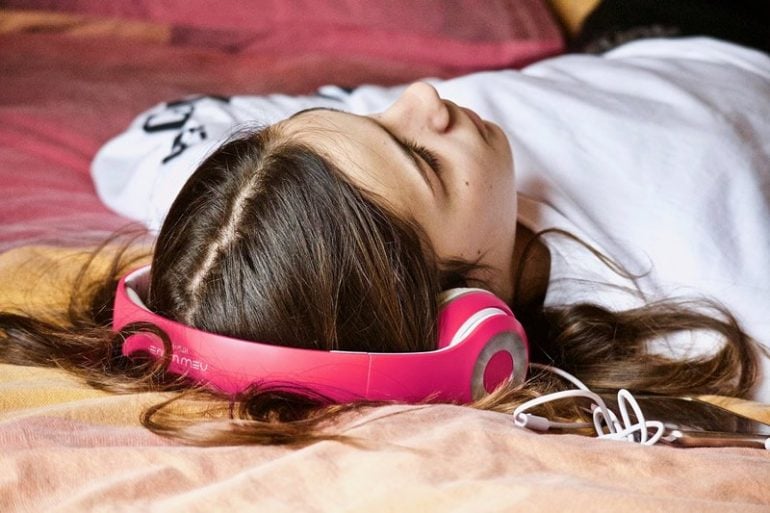 The music choice was important, researchers said. The image is in the public domain.

Summary: Listening to classical music during a lecture and again as you sleep can help improve test performance.

College students who listened to classical music by Beethoven and Chopin during a computer-interactive lecture on microeconomics — and heard the music played again that night — did better on a test the next day than did peers who were in the same lecture, but instead slept that evening with white noise in the background.

Over the long haul — when students took a similar test nine months later — the boost did not last. Scores dropped to floor levels, with everyone failing and performance averaging less than 25% percent for both groups. However, targeted memory reactivation (TMR) may aid during deep sleep, when memories are theorized to be reactivated and moved from temporary storage in one part of the brain to more permanent storage in other parts, researchers said.

The study, supported by the National Science Foundation and conducted by Baylor’s Sleep Neuroscience and Cognition Laboratory (SNAC), is published in the journal Neurobiology of Learning and Memory.

“All educators want to teach students how to integrate concepts, not just memorize details, but that’s notoriously difficult to do,” said Michael K. Scullin, Ph.D., director of Baylor’s sleep lab and assistant professor of psychology and neuroscience. “What we found was that by experimentally priming these concepts during sleep, we increased performance on integration questions by 18% on the test the next day. What student wouldn’t want a boost or two to their letter grade? The effects were particularly enhanced in participants who showed heightened frontal lobe activity in the brain during slow wave sleep, which is deep sleep.”

He noted that the effects emerged when using gold standard procedures: neither participants nor experimenters knew who received a particular treatment, sleep was measured using EEG in a laboratory setting, and the learning materials matched those that would actually be used in a college classroom, in this case an undergraduate microeconomics lecture.

Poor sleep is widespread in college students, with 60 percent habitually sleeping fewer than the recommended seven hours on 50 to 65 percent of nights. While students may be more concerned about immediate test results — and TMR may help them cram for an exam — learning by rote (item memory) does not normally benefit grasping and retaining a concept.

For the study, researchers recruited 50 college students ages 18 to 33 for a learning task with a self-paced, computer-interactive lecture; and for two overnight polysomnography sessions, with the first night an adaptation to the lab and screening for sleep disorders, and the second done the evening of the lecture.

That night in Baylor’s sleep lab, research personnel applied electrodes and used computers to monitor sleep patterns of both test and control groups. Once technicians observed a person was in deep sleep, they played either the classical music or the white noise — depending on whether the individual was in the test or control group — for about 15 minutes.

“Deep slow wave sleep won’t last super long before shifting back to light sleep, so we couldn’t play them endlessly,” Scullin said. “If we played it during light sleep, the music probably would have awoken participants. The first slow wave cycle is the deepest and longest.”

“We ruled out jazz because it’s too sporadic and would probably cause people to wake,” Scullin said. “We ruled out popular music because lyrical music disrupts initial studying. You can’t read words and sing lyrics — just try it. We also ruled out ocean waves and ambient music because it’s very easy to ignore. You’re going to have a heck of a time forming a strong association between some learning material and a bland song or ambient noise.

“That left us with classical music, which many students already listen to while studying,” he said. “The songs can be very distinctive and therefore pair well with learning material.”

In the microeconomics exam the next day, the TMR of classical music more than doubled the likelihood of passing the test when compared with the control condition of white noise.

Scullin cautioned against confusing the Baylor study’s findings with the so-called “Mozart Effect” — the finding that having students listen to Mozart pieces led to better scores on intelligence tests. Subsequent tests of the “Mozart Effect” found that it either did not replicate or that boosts were strictly due to increased arousal when listening to energetic music.

Previous researchers have found that memories associated with sensory cues — such as an odor or song — are re-activated when the same cue is received later. When that happens during deep sleep, the corresponding memories are activated and strengthened, said co-researcher Chenlu Gao, a doctoral candidate of psychology and neuroscience at Baylor.

Early experimenters also played audio tapes during sleep to test whether individuals can learn new knowledge while sleeping. But while those experiments failed to create new memories, “our study suggests it is possible to reactivate and strengthen existing memories of lecture materials during sleep,” Gao said.

“Our next step is to implement this technique in classrooms — or in online lectures while students complete their education at home due to COVID-19 social distancing measures — so we can help college students ‘re-study’ their class materials during sleep.”

“We think it is possible there could be long-term benefits of using TMR but that you might have to repeat the music across multiple nights,” Scullin added. “After all, you wouldn’t just study material a single time and then expect to remember it months later for a final exam. The best learning is repeated at spaced-out intervals — and, of course, while maintaining good sleep habits.”

Funding: The study was supported by the National Science Foundation. Paul Fillmore, assistant professor of communication sciences and disorders in Baylor’s Robbins College of Health and Human Sciences, also was a co-researcher.

An Animal-Free Method of Creating Human Brain Cells for Research

Poor sleep in college students compromises the memory consolidation processes necessary to retain course materials. A solution may lie in targeting reactivation of memories during sleep (TMR). Fifty undergraduate students completed a college-level microeconomics lecture (mathematics-based) while listening to distinctive classical music (Chopin, Beethoven, and Vivaldi). After they fell asleep, we re-played the classical music songs (TMR) or a control noise during slow wave sleep. Relative to the control condition, the TMR condition showed an 18% improvement for knowledge transfer items that measured concept integration (d = 0.63), increasing the probability of “passing” the test with a grade of 70 or above (OR = 4.68, 95%CI: 1.21, 18.04). The benefits of TMR did not extend to a 9-month follow-up test when performance dropped to floor levels, demonstrating that long-term-forgetting curves are largely resistant to experimentally-consolidated memories. Spectral analyses revealed greater frontal theta activity during slow wave sleep in the TMR condition than the control condition (d = 0.87), and greater frontal theta activity across conditions was associated with protection against long-term-forgetting at the next-day and 9-month follow-up tests (rs = 0.42), at least in female students. Thus, students can leverage instrumental music—which they already commonly pair with studying—to help prepare for academic tests, an approach that may promote course success and persistence.