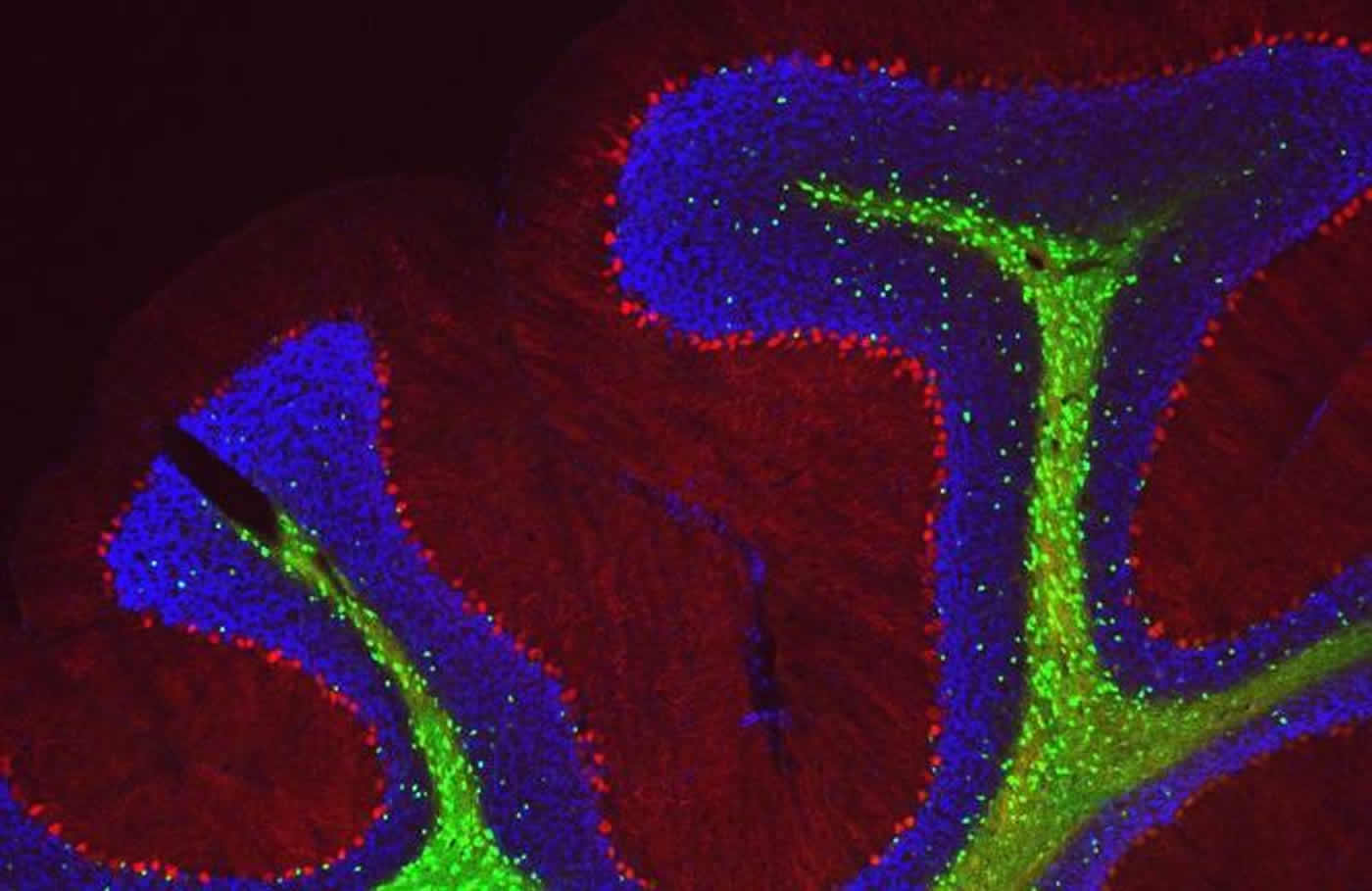 A magnified image of a mouse cerebellar section shows multiple layers. New research shows this part of the brain may be a target for treating autism through brain stimulation. NeuroscienceNews.com image is credited to UTSW.

Summary: In a mouse model of autism, researchers have successfully restored social behavior with the help of brain stimulation. Researchers are now considering if it would be feasible to treat children on the autism spectrum with similar neuromodulation techniques.

Scientists are examining the feasibility of treating autistic children with neuromodulation after a new study showed social impairments can be corrected by brain stimulation.

The research from the O’Donnell Brain Institute provides the first evidence that a specific part of the cerebellum, a region near the brain stem that has long been thought to only have roles in coordinating movement, is critical for autistic behaviors. It also establishes a more accessible target for brain stimulation than many autism-related neural circuits that are buried deep within the brain’s folds.

“This is potentially quite a powerful finding,” said Dr. Peter Tsai, who directed the research from UT Southwestern Medical Center’s Peter O’Donnell Jr. Brain Institute. “From a therapeutic standpoint, this part of the cerebellum is an enticing target. And although neuromodulation would not cure the underlying genetic cause of a person’s autism, improving social deficits in children with autism could make a huge impact on their quality of life.”

The research – the cover story of December’s Nature Neuroscience – utilized neuromodulation to demonstrate that humans and mice have parallel connections between specific domains within the cerebellum and cerebral cortex that have been implicated in autism studies. Subsequent phases of the study showed that disrupting the function within the cerebellar domain resulted in autistic behaviors and that brain stimulation corrected social impairment in mice.

The next step is to ensure the same technique would be safe to conduct on children. Although doctors have safely applied cerebellar neuromodulation to disorders such as schizophrenia, it has not been studied in children with autism.

Dr. Tsai is planning on changing this situation through future studies at UT Southwestern’s Center for Autism and Developmental Disabilities.

“This area of the brain has not received the attention it deserves in regards to understanding autism,” said Dr. Tsai, noting that most of the focus of autism research has been on the cortex, a region of the brain associated with cognition.

Autism spectrum disorder (ASD) is a neurodevelopmental condition that affects approximately 1 in 68 children in the U.S. It is characterized by social interaction and communication challenges, and restricted and repetitive patterns of behavior.

To better understand the cerebellum’s role in mediating these behaviors, Dr. Tsai’s team used neuromodulation to show that humans and mice have parallel connections between the Right CrusI domain of the cerebellum and the cortex’s inferior parietal lobule. 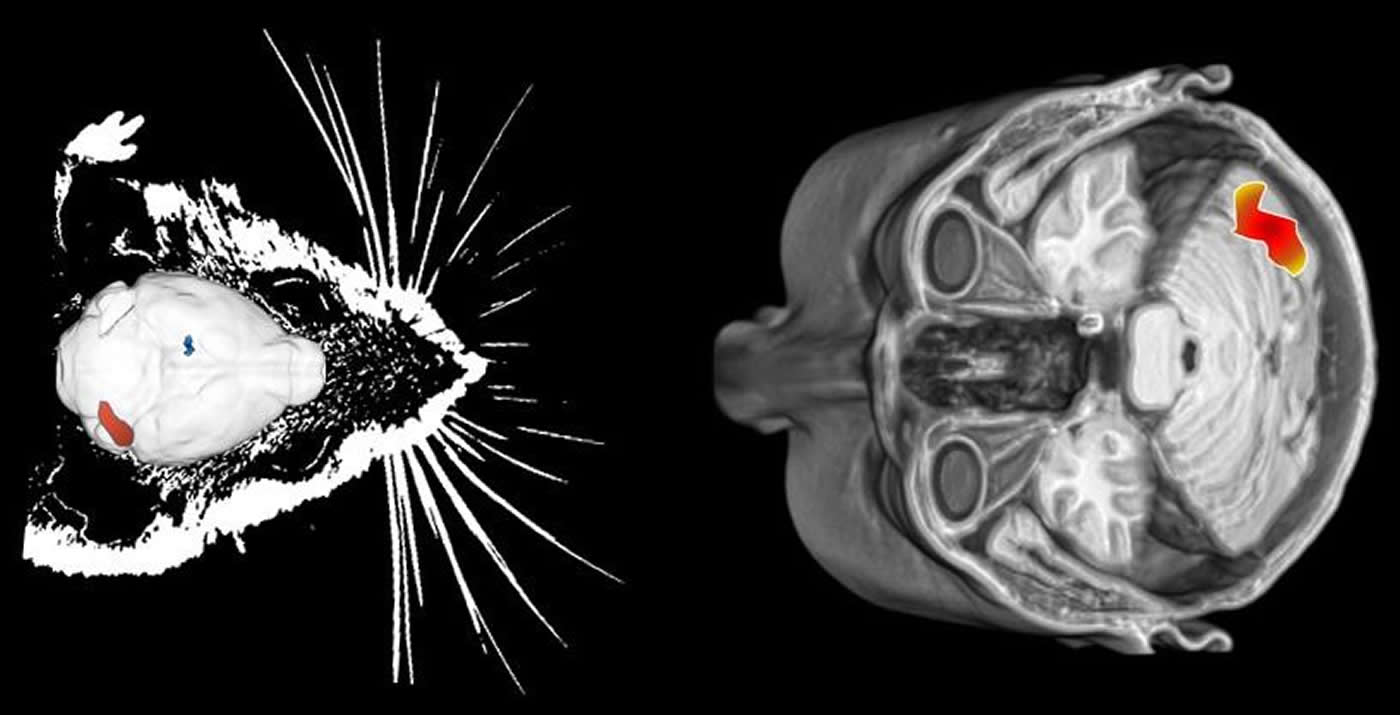 MRIs of a human brain and mouse brain highlight in red a domain in the cerebellum that scientists believe can be a new target in treating autism. Neuromodulation in this area of the brain corrected social impairment in mice. NeuroscienceNews.com image is credited to UTSW.

The study authors next used brain imaging to demonstrate that those same connections are disrupted in a cohort of autistic children and an autism mouse model. They further showed that disrupting function within Right CrusI in normal mice resulted in impaired social interaction and abnormal, repetitive behaviors.

The team went further and asked whether neuromodulation could improve behaviors. By stimulating neurons in Right CrusI of the autism mouse model, the scientists showed that cerebellar stimulation improved social behaviors but not the repetitive behaviors characteristic of autism in these mice.

Dr. Tsai said the limited effects may reflect the involvement of additional parts of the cerebellum or perhaps the restricted timeframe for which some behaviors can be corrected. However, he also noted that this neuromodulation restored social behaviors even in adult mice. This result suggests autistic children may still benefit from treatments even if intervention is delayed until later in life.

“Our findings have prompted new thoughts on how the cerebellum may be involved in autism and most importantly suggest that the cerebellum could be a therapeutic target for treatment,” said Dr. Tsai, Assistant Professor of Neurology & Neurotherapeutics, who cares for children with autism and cerebellar disorders as part of the Center for Autism and Developmental Disabilities.