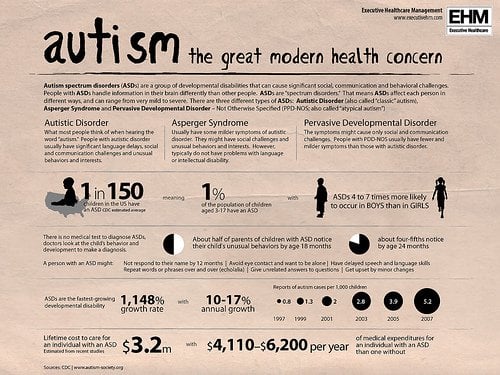 Researchers from the University of Connecticut have discovered a small group of children diagnosed with ASD early in life now appear to be on par with the development of their peers.
Home
Autism

Some children who are accurately diagnosed in early childhood with autism lose the symptoms and the diagnosis as they grow older, a study supported by the National Institutes of Health has confirmed. The research team made the finding by carefully documenting a prior diagnosis of autism in a small group of school-age children and young adults with no current symptoms of the disorder.

The report is the first of a series that will probe more deeply into the nature of the change in these children’s status. Having been diagnosed at one time with an autism spectrum disorder (ASD), these young people now appear to be on par with typically developing peers. The study team is continuing to analyze data on changes in brain function in these children and whether they have subtle residual social deficits. The team is also reviewing records on the types of interventions the children received, and to what extent they may have played a role in the transition.

“Although the diagnosis of autism is not usually lost over time, the findings suggest that there is a very wide range of possible outcomes,” said NIMH Director Thomas R. Insel, M.D. “For an individual child, the outcome may be knowable only with time and after some years of intervention. Subsequent reports from this study should tell us more about the nature of autism and the role of therapy and other factors in the long term outcome for these children.”

The study, led by Deborah Fein, Ph.D., at the University of Connecticut, Storrs, recruited 34 optimal outcome children, who had received a diagnosis of autism in early life and were now reportedly functioning no differently than their mainstream peers. For comparison, the 34 children were matched by age, sex, and nonverbal IQ with 44 children with high-functioning autism, and 34 typically developing peers. Participants ranged in age from 8 to 21 years old.

Prior studies had examined the possibility of a loss of diagnosis, but questions remained regarding the accuracy of the initial diagnosis, and whether children who ultimately appeared similar to their mainstream peers initially had a relatively mild form of autism. In this study, early diagnostic reports by clinicians with expertise in autism diagnosis were reviewed by the investigators. As a second step to ensure accuracy, a diagnostic expert, without knowledge of the child’s current status, reviewed reports in which the earlier diagnosis had been deleted. The results suggested that children in the optimal outcome group had milder social deficits than the high functioning autism group in early childhood, but had other symptoms, related to communication and repetitive behavior, that were as severe as in the latter group.

The investigators evaluated the current status of the children using standard cognitive and observational tests and parent questionnaires. The optimal outcome children had to be in regular education classrooms with no special education services aimed at autism. They now showed no signs of problems with language, face recognition, communication, and social interaction.

This study cannot provide information on what percentage of children diagnosed with ASD might eventually lose the symptoms. Study investigators have collected a variety of information on the children, including structural and functional brain imaging data, psychiatric outcomes, and information on the therapies that the children received. Analysis of those data, which will be reported in subsequent papers, may shed light on questions such as whether the changes in diagnosis resulted from a normalizing of brain function, or if these children’s brains were able to compensate for autism-related difficulties. The verbal IQs of the optimal outcome children were slightly higher than those with high functioning autism. Additional study may reveal whether IQ may have been a factor in the transition they made.

How We Misunderstand Anxiety and Miss Out on Its Benefits

“All children with ASD are capable of making progress with intensive therapy, but with our current state of knowledge most do not achieve the kind of optimal outcome that we are studying,” said Dr. Fein. “Our hope is that further research will help us better understand the mechanisms of change so that each child can have the best possible life.”

Notes about this Autism research article

This study was funded by the NIH.