Scientists studying brain diseases may need to look beyond nerve cells and start paying attention to the star-shaped cells known as “astrocytes,” because they play specialized roles in the development and maintenance of nerve circuits and may contribute to a wide range of disorders, according to a new study by UC San Francisco researchers.

In a study published online April 28, 2014 in Nature, the researchers report that malfunctioning astrocytes might contribute to neurodegenerative disorders such as Lou Gehrig’s disease (ALS), and perhaps even to developmental disorders such as autism and schizophrenia.

The researchers discovered in mice that a particular form of astrocyte within the spinal cord secretes a protein needed for survival of the nerve circuitry that controls reflexive movements. This discovery is the first demonstration that different types of astrocytes exist to support development and survival of distinct nerve circuits at specific locations within the central nervous system. 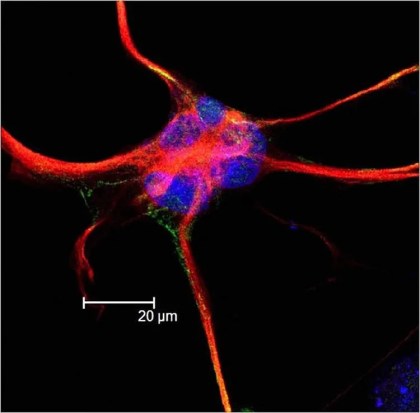 Astrocytes vastly outnumber signal-conducting neurons, and make up the majority of cells in the brain. But where neuroscientists are accustomed to seeing only vanilla when it comes to astrocytes – viewing all of them as similar despite their different locations in brain and spinal cord — they now will have to imagine “31 flavors” or more.

There might even be hundreds of distinctive varieties of astrocytes performing specific functions in different locations, according to Rowitch, chief of neonatology for UCSF Benioff Children’s Hospital San Francisco.

“Our study shows roles for specialized astrocytes that function to support particular kinds of neurons in their neighborhood,” Rowitch said.

Led by Rowitch lab postdoctoral fellow Anna Molofsky, MD, PhD, the researchers studied the spinal cord sensory motor circuit, which allows both mice and humans to react without thought – to jerk a limb away from something hot, for instance.

The team discovered that a protein called Sema3a is produced much more abundantly by astrocytes close to motor neurons than by astrocytes from other regions in the spinal cord. They concluded that motor neurons required this source of Sema3a from the local astrocytes, because when Sema3a production was blocked, the motor neurons failed to form normal connections, and half of them died.

Motor neurons also die in ALS, a fatal neurodegenerative disease, and in spinal muscular atrophy, a disease that can affect newborn infants. In other studies, scientists have found that abnormal astrocytes can have toxic effects on motor neurons.

Molofsky is a psychiatrist who studies how astrocytes organize nerve circuits, and how disruptions of these nerve circuits during development or disease may involve abnormal astrocyte function. Disrupted neural circuits are believed to be responsible for certain psychiatric disorders.

“The immediate implications of this study are for diseases of motor neurons, like ALS, but I think our findings might also apply more generally to diseases of neural-circuit formation in the brain such as autism, schizophrenia and epilepsy,” Molofsky said. “To achieve a comprehensive understanding of how neural circuits form and are maintained, it seems important that we integrate knowledge of how astrocytes support that process.”

Rowitch agrees. “To the extent that psychiatric or neurological disease is localized to a specific part of the brain, we should now be considering the potentially specialized type of astrocytes regulating nerve connections in that region and their contributions to disease,” he said.