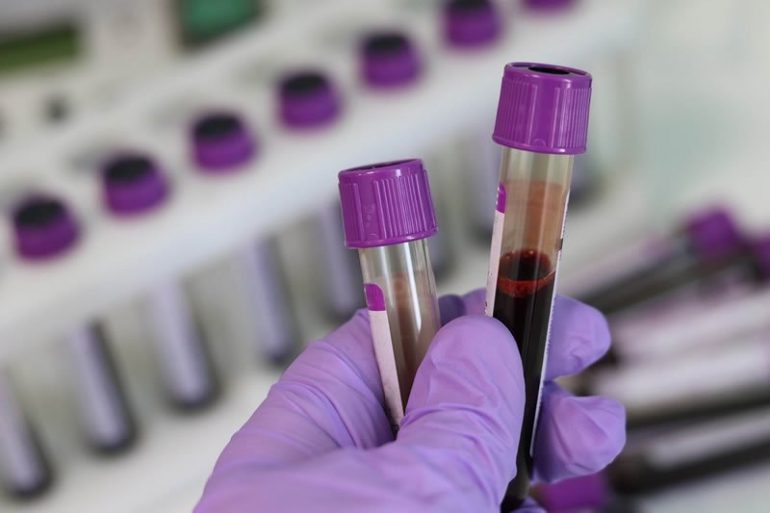 The results now published show that the level of P-tau181 is greatly elevated in Alzheimer's, including at its early stage, known as mild cognitive impairment. Image is in the public domain.

A new blood test for Alzheimer’s disease has been developed under the leadership of researchers at the University of Gothenburg, Sweden. The method is based on measuring a specific variant of tau protein in ordinary blood samples, which makes the test relatively simple and cheap to perform.

Alzheimer’s disease is characterized by two pathological changes in the tissue of the nervous system. One is the formation of extracellular clumps of a protein called beta-amyloid. The other is neurofibrils, composed of tau protein, that have stuck together in tiny lesions (“neurofibrillary tangles”) in the brain neurons through a biochemical process known as phosphorylation.

The newly developed method is based on measurement of phosphorylated tau — specifically, the P-tau181 variant — in ordinary blood samples, performed with an ultrasensitive method known as Single Molecule Array (Simoa). Simoa can measure considerably lower levels of protein biomarkers than other analytical methods.

P-tau181 has long been measurable through testing of cerebrospinal fluid, in which it is found at a considerably higher level than in blood samples. For the past few years, it has also been possible to demonstrate neurofibrils by using the advanced positron emission tomography (PET) medical imaging technique. Tests of cerebrospinal fluid are, however, difficult to perform in primary care, and the high costs of PET scans restrict their use. Being able to establish tau pathology through ordinary blood tests will therefore be highly valuable.

The results now published show that the level of P-tau181 is greatly elevated in Alzheimer’s, including at its early stage, known as mild cognitive impairment. However, this raised level was found only in the patients who also had amyloid plaques, as revealed by the PET camera.

The level of specific P-tau181 in blood plasma also proved to correspond very closely with the level of tau tangles in the brain registered with the PET-technique. The blood test also identified people early on in the course of the disease who had plaques, but in whom the PET technique discerned no increased tau levels.

The blood test showed a very good capacity to distinguish Alzheimer’s from other brain diseases, such as frontotemporal dementia and Parkinson’s disease, where the blood level of P-tau181 was entirely normal.

“We believe that, in the future, one very important use of our blood test will be for screening in primary care. We demonstrated this in one of the studies forming part of our article, in which we looked at patients in primary care with concerns about their failing memory,” Blennow says.

“We also think the level of P-tau181 in blood plasma may be a very important marker to show and monitor the efficacy of the new drugs against Alzheimer’s that are currently being developed,” says Henrik Zetterberg.