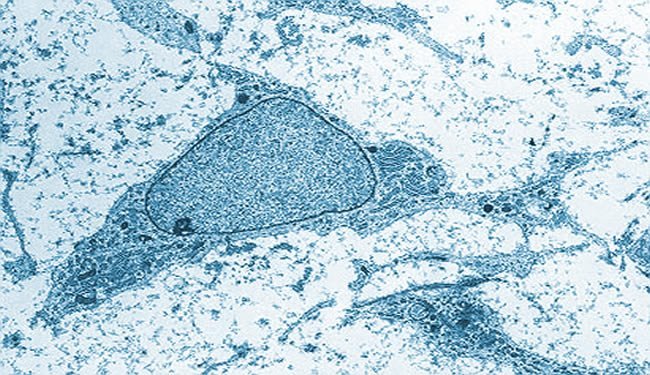 University of Buffalo researchers genetically altered mesenchymal stem cells to create new stem cell lines that showed no signs of aging in culture, did not increase tumor production in animal studies and functioned as healthy mesenchymal cells do. This biomedical research could aid in advancing treatments for neurological diseases, immune disorders, heart disease and others.

Researchers engineer adult stem cells that do not age

Biomedical researchers at the University at Buffalo have engineered adult stem cells that scientists can grow continuously in culture, a discovery that could speed development of cost-effective treatments for diseases including heart disease, diabetes, immune disorders and neurodegenerative diseases.

The researchers say the breakthrough overcomes a frustrating barrier to progress in the field of regenerative medicine: The difficulty of growing adult stem cells for clinical applications.

Because mesenchymal stem cells have a limited life span in laboratory cultures, scientists and doctors who use the cells in research and treatments must continuously obtain fresh samples from bone marrow donors, a process both expensive and time-consuming. In addition, mesenchymal stem cells from different donors can vary in performance.

The cells that UB researchers modified show no signs of aging in culture, but otherwise appear to function as regular mesenchymal stem cells do – including by conferring therapeutic benefits in an animal study of heart disease. Despite their propensity to proliferate in the laboratory, MSC-Universal cells did not form tumors in animal testing.

“Our stem cell research is application-driven,” says Techung Lee, PhD, UB associate professor of biochemistry and biomedical engineering in the School of Medicine and Biomedical Sciences and the School of Engineering and Applied Sciences, who led the project. “If you want to make stem cell therapies feasible, affordable and reproducible, we know you have to overcome a few hurdles. Part of the problem in our health care industry is that you have a treatment, but it often costs too much. In the case of stem cell treatments, isolating stem cells is very expensive. The cells we have engineered grow continuously in the laboratory, which brings down the price of treatments.”

UB has applied for a patent to protect Lee’s discovery, and the university’s Office of Science, Technology Transfer and Economic Outreach (UB STOR) is discussing potential license agreements with companies interested in commercializing MSC-Universal.

Lee says his research team has generated two lines of MSC-Universal cells: a human line and a porcine line. Using the engineering technique he and colleagues developed, scientists can generate an MSC-Universal line from any donor sample of mesenchymal stem cells, he says. “I imagine that if these cells become routinely used in the future, one can generate a line from each ethnic group for each gender for people to choose from,” Lee says.