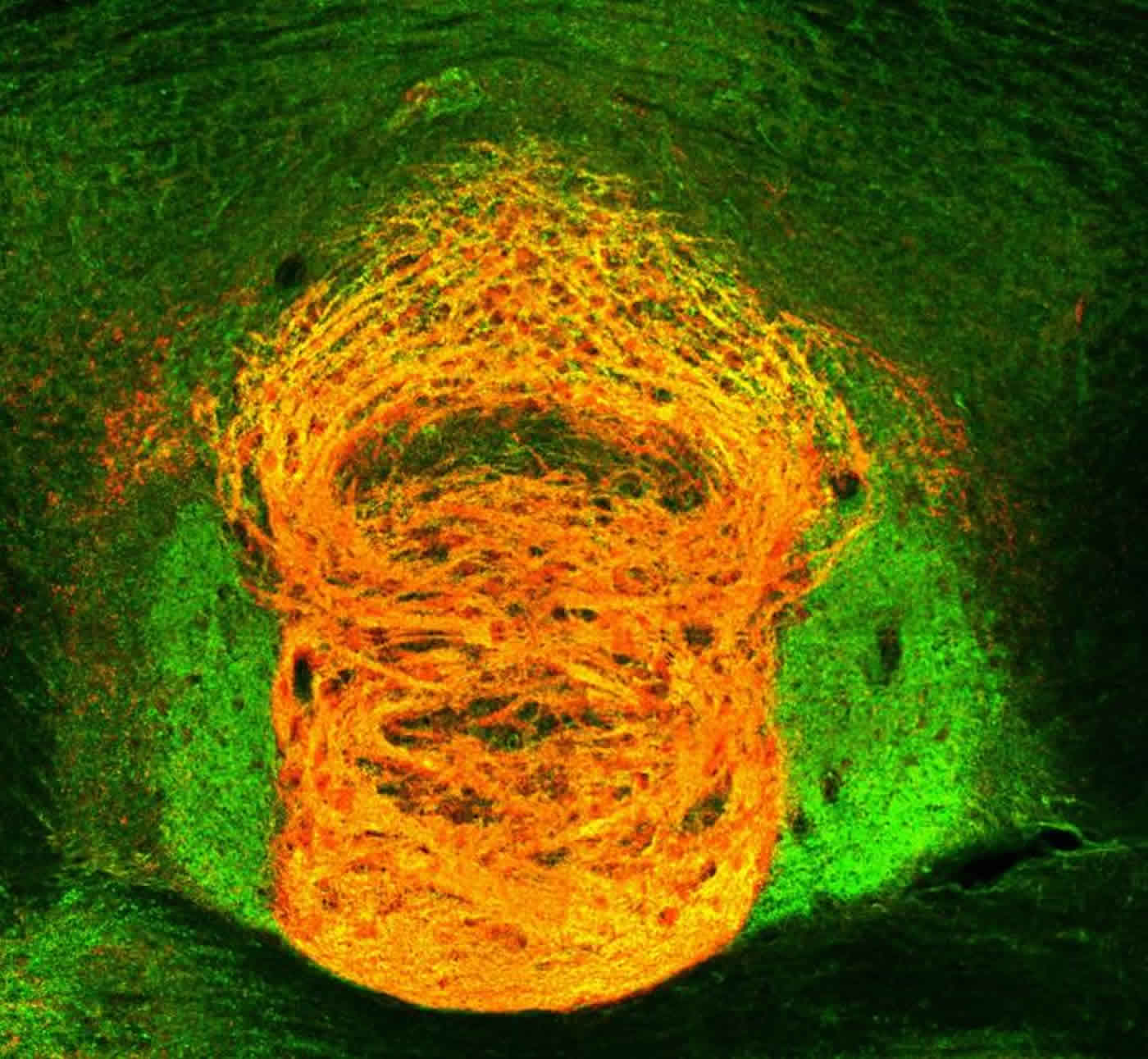 The neurotransmitters acetylcholine and glutamate were known to play a role in nicotine dependence. The orange region above shows the overlap of these neurotransmitters in the habenular circuit, where they interact to reinforce addiction. Credit: Laboratory of Molecular Biology at The Rockefeller University.

So Hard To Quit: New Mechanism in Nicotine Addiction Discovered

Part of the reason people find smoking difficult to quit is that each time they have a cigarette, feelings of craving, irritability and anxiety melt away. This component of addiction is known as negative reward and is controlled in part by a region of the brain called the habenula. The neurotransmitters acetylcholine and glutamate are thought to influence nicotine dependence in the habenula, but the molecular details of this regulation are unclear.

“We knew that both of these neurotransmitters played important roles in the neurons in the habenula,” says Ines Ibanez-Tallon, Research Associate Professor in the Laboratory of Molecular Biology, headed by James and Marilyn Simons Professor Nathaniel Heintz. “What we didn’t know was how they might interact, or work together to reinforce addiction.”

Ibanez-Tallon and colleagues now report that acetylcholine regulates glutamate signaling in the habenula, identifying a new mechanism important for nicotine dependence. The study was published on December 1 in eLife.

Neurotransmitters, the chemical messengers of the brain, are packaged into spherical structures called vesicles, which reside at the ends of neurons. Upon receiving certain signals, neurons release their vesicle contents into the synapse, perpetuating the signal onto the next neuron. Neurons can recycle neurotransmitters by reabsorbing them through reuptake, a process that allows them to precisely control the amounts of neurotransmitters in the synapse.

Even a small upset in the balance of neurotransmitters can result in altered behavior. In the case of acetylcholine, it can influence our ability to cope with addiction.

“To understand how these neurotransmitters work, we created a mouse model whose habenular neurons don’t make acetylcholine because the mice lack a key gene involved in acetylcholine processing,” says Ibanez-Tallon. “In our experiments, we observed that the elimination of acetylcholine affected glutamate in this brain region in two ways. First, the amount of glutamate released by neurons was reduced. And second, the reuptake of glutamate back into vesicles was impaired. Both of these mechanisms affect the excitability of neurons, meaning normal signaling is disrupted.”

Based on these findings, the researchers suggest that acetylcholine regulates how much glutamate is released into the synapse, and at what frequency. It also facilitates the packaging of glutamate into vesicles.

Studies using electron microscopy confirmed that the neurotransmitters are in the same place at the same time, and are able to affect one another.

How does this affect behavior?

Behaviorally, removing acetylcholine from the habenula caused the mice to become insensitive to the rewarding properties of nicotine, and they did not develop a tolerance to continued nicotine exposure. In addition, these mice did not experience withdrawal symptoms, such as body shakes and scratching. These findings and others indicate that without acetylcholine, nicotine addiction would not occur.

Although smoking rates have decreased in recent years, there’s a consistent portion of the population that continues to smoke, and a continued need for research into tobacco addiction. This study helps us understand a bit more about the brain circuitry involved in this dependence, which is also relevant to opioid and cannabinoid addiction.

Next, the Ibanez-Tallon group is interested in understanding how the interaction between acetylcholine and glutamate may work in other areas of the brain. “Because most nerve cells that release acetylcholine also release glutamate at the same time, the next challenge is to investigate whether the synergy between these two neurotransmitters is important for other functions that involve acetylcholine, such as memory and cognition.”

About this nicotine addiction and neuroscience research

A great deal of interest has been focused recently on the habenula and its critical role in aversion, negative-reward and drug dependence. Using a conditional mouse model of the ACh-synthesizing enzyme choline acetyltransferase (Chat), we report that local elimination of acetylcholine (ACh) in medial habenula (MHb) neurons alters glutamate corelease and presynaptic facilitation. Electron microscopy and immuno-isolation analyses revealed colocalization of ACh and glutamate vesicular transporters in synaptic vesicles (SVs) in the central IPN. Glutamate reuptake in SVs prepared from the IPN was increased by ACh, indicating vesicular synergy. Mice lacking CHAT in habenular neurons were insensitive to nicotine-conditioned reward and withdrawal. These data demonstrate that ACh controls the quantal size and release frequency of glutamate at habenular synapses, and suggest that the synergistic functions of ACh and glutamate may be generally important for modulation of cholinergic circuit function and behavior.