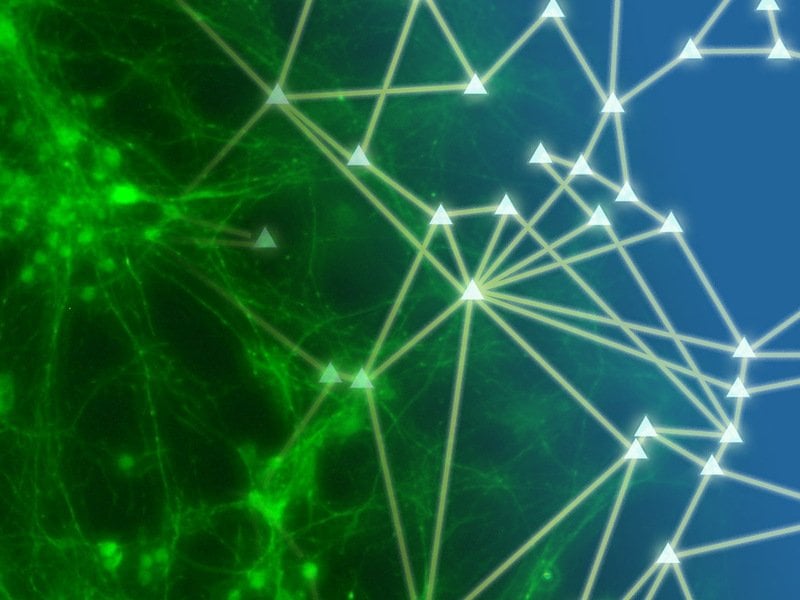 Calcium fluorescence measurements show the activity of neurons (left). From this, the scientists can deduce how the neurons are connected with each other (right). Credited to MPI for Dynamics and Self-Organization.
Home
Electrophysiology

A Glance at the Brain’s Circuit Diagram

A new method facilitates the mapping of connections between neurons.

The human brain accomplishes its remarkable feats through the interplay of an unimaginable number of neurons that are interconnected in complex networks. A team of scientists from the Max Planck Institute for Dynamics and Self-Organization, the University of Göttingen and the Bernstein Center for Computational Neuroscience Göttingen has now developed a method for decoding neural circuit diagrams. Using measurements of total neuronal activity, they can determine the probability that two neurons are connected with each other.

The human brain consists of around 80 billion neurons, none of which lives or functions in isolation. The neurons form a tight-knit network that they use to exchange signals with each other. The arrangement of the connections between the neurons is far from arbitrary, and understanding which neurons connect with each other promises to provide valuable information about how the brain works. At this point, identifying the connection network directly from the tissue structure is practically impossible, even in cell cultures with only a few thousand neurons. In contrast, there are currently well-developed methods for recording dynamic neuronal activity patterns. Such patterns indicate which neuron transmitted a signal at what time, making them a kind of neuronal conversation log. The Göttingen-based team headed by Theo Geisel, Director at the Max Planck Institute for Dynamics and Self-Organization, has now made use of these activity patterns.

The scientists use data from so-called calcium fluorescence measurements that were recorded in collaboration with the University of Barcelona. This imaging method uses specially tailored molecules placed in a cell that fluoresce when they bind calcium. Since the calcium concentration inside a neuron follows its electrical activity, it is possible to record the activity of thousands of neurons simultaneously – whether in a cell culture or in the living brain. However, the speed of the communication is too high to directly observe directly how an impulse is “fired” sand thus tease apart whether a connection is direct or takes places across several stations. By taking into account these difficulties, the algorithm developed in Theo Geisel’s team makes it possible to obtain from the measured data remarkably precise information about the lines of connection in the neural network.

“Our method is based on a concept known as transfer entropy,” explains Olav Stetter from the Max Planck Institute in Göttingen, lead author of the now published article. Transfer entropy is a measure used in information theory to quantify directed information flows. In other words, it is possible to calculate how probable it is that the signal from a particular neuron would result in activity in another. “Using transfer entropy, we developed a robust method that can reliably distinguish between true causal relationships and those that only appear to exist but resulted from indirect connections or measurement errors,” says Stetter.

The scientists initially applied their new method to simulated calcium fluorescence experiments. They used a neuronal network model to simulate the measured signals including realistic effects of calcium dynamics and fluorescence measurements. As the scientists show, the causal relationships in the network are time variable and dependent on the state of the network activity. Only in calmer phases with relatively low activity did the causal relationships coincide with the actual structure of the network. The researchers in Göttingen were able to use this fact for their predictions. In more active phases so many neurons are simultaneously participating in the neuronal conversation that it is no longer easily possible to trace the path of information.

In the present article, they also examined real neurons. The analysis with the new method revealed an unusual concentration of connections surrounding individual cells. The researchers are optimistic that their method can be used on a broad class of systems: “Our method makes it possible to reconstruct neural networks without any specific assumptions regarding their makeup. Rather, we take a data-driven approach,” explains Demian Battaglia.

The scientists hope that their algorithm will permit neural circuit diagrams to be calculated on a broad scale, in both cultivated and natural networks. The collected information from a number of different neural networks may then help researchers understand when and where neurons create connections, and which criteria they use to select their partners.

Notes about this neural network research