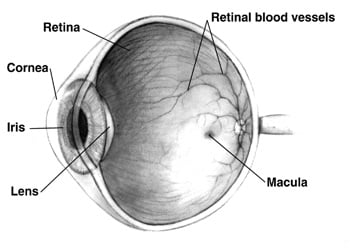 University of Queensland (UQ) scientists have made a fundamental breakthrough into how the brain decodes the visual world.

QBI’s Dr Ben Sivyer and Associate Professor Stephen Williams have found that dendrites – the branching process of a neuron that conducts impulses toward the cell – play a critical role in decoding images.

“In the past decade our research shows that dendrites provide neurons with powerful processing capabilities,” Associate Professor Williams said.

“However the function of dendritic processing in the real-time operation of neuronal networks has remained elusive.”

“The retina, a thin neuronal network at the posterior part of the eyeball, is ideal for investigating the role of active dendritic integration in neuronal circuit function,” he said.

“This is because this network can be maintained intact in a dish and retains its responsiveness to natural stimuli.”

He said while it had long been known that the retinal network extracted and signalled specific aspects of visual stimuli, the new work has discovered how such responses are computed.

“We found that retinal ganglion cells compute the direction of light stimuli through exquisitely controlled local integration compartments in the dendritic tree, a finding which highlights the key function that dendrites play in brain computations,” said Associate Professor Williams.

“Discovering how nerve cells process information is fundamental to understanding how we learn, and to developing new strategies to enhance learning in education and in disease processes in the brain,” he said.

“This is another example of Queensland leading the world in health and medical research,” he said.

“Dendrite research also has flow-on implications for brain-function studies in a range of areas.

“While all of these areas are important, I will be particularly interested to see its application to dementia research, which has been a major focus for recent Queensland Government support.”

The paper, Direction selectivity is computed by active dendritic integration in retinal ganglion cells, is published in the prestigious journal Nature Neuroscience.