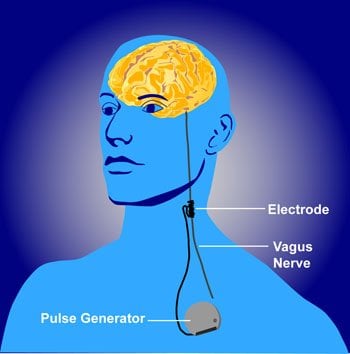 All of the participants had surgery to insert a device to electronically stimulate the left vagus nerve, which runs down the side of the body from the brainstem to the abdomen. Once activated, the device delivers a 30-second electronic stimulus to the vagus nerve every five minutes.
Home
Featured

For nearly a decade, doctors have used an implanted electronic stimulator to treat severe depression in people who don’t respond to standard antidepressant therapy.

Now, preliminary brain scan studies conducted by researchers at Washington University School of Medicine in St. Louis are beginning to reveal the processes occurring in the brain during stimulation and may provide some clues about how the device improves depression. They found that vagus nerve stimulation brings about changes in brain metabolism weeks or even months before patients begin to feel better.

The findings will appear in an upcoming issue of the journal Brain Stimulation and are now available online.

“Previous studies involving large numbers of people have demonstrated that many with treatment-resistant depression improve with vagus nerve stimulation,” says first author Charles R. Conway, MD, associate professor of psychiatry. “But little is known about how this stimulation works to relieve depression. We focused on specific brain regions known to be connected to depression.”

Conway’s team followed 13 people with treatment-resistant depression. Their symptoms had not improved after many months of treatment with as many as five different antidepressant medications. Most had been depressed for at least two years, but some patients had been clinically depressed for more than 20 years.

All of the participants had surgery to insert a device to electronically stimulate the left vagus nerve, which runs down the side of the body from the brainstem to the abdomen. Once activated, the device delivers a 30-second electronic stimulus to the vagus nerve every five minutes.

To establish the nature of the treatment’s effects on brain activity, the researchers performed positron emission tomography (PET) brain imaging prior to the initiation of stimulation, and again three and 12 months after stimulation had begun.

Eventually, nine of the 13 subjects experienced improvements in depression with the treatment. However, in most cases it took several months for improvement to occur.

Remarkably, in those who responded, the scans showed significant changes in brain metabolism following three months of stimulation, which typically preceded improvements in symptoms of depression by several months.

“We saw very large changes in brain metabolism occurring far in advance of any improvement in mood,” Conway says. “It’s almost as if there’s an adaptive process that occurs. First, the brain begins to function differently. Then, the patient’s mood begins to improve.”

Although the patients remained on antidepressants for several months after their stimulators were implanted, Conway says many of those who responded to the device eventually were able to stop taking medication.
“Sometimes the antidepressant drugs work in concert with the stimulator, but it appears to us that when people get better, it is the vagus nerve stimulator that is doing the heavy lifting,” Conway explains. “Stimulation seems to be responsible for most of the improvement we see.”

Additionally, the PET scans demonstrated that structures deeper in the brain also begin to change several months after nerve stimulation begins. Many of those structures have high concentrations of brain cells that release dopamine, a neurotransmitter that helps control the brain’s reward and pleasure centers and also helps regulate emotional responses.

There is a consensus forming among depression researchers that problems in dopamine pathways may be particularly important in treatment-resistant depression, according to Conway. And he says the finding that vagus nerve stimulators influence those pathways may explain why the therapy can help and why, when it does work, its effects are not transient. Patients who respond to vagus nerve stimulation tend to get better and to stay better.

“We hypothesized that something significant had to be occurring in the brain, and our research seems to back that up,” he says.

Notes about this neurology and depression research