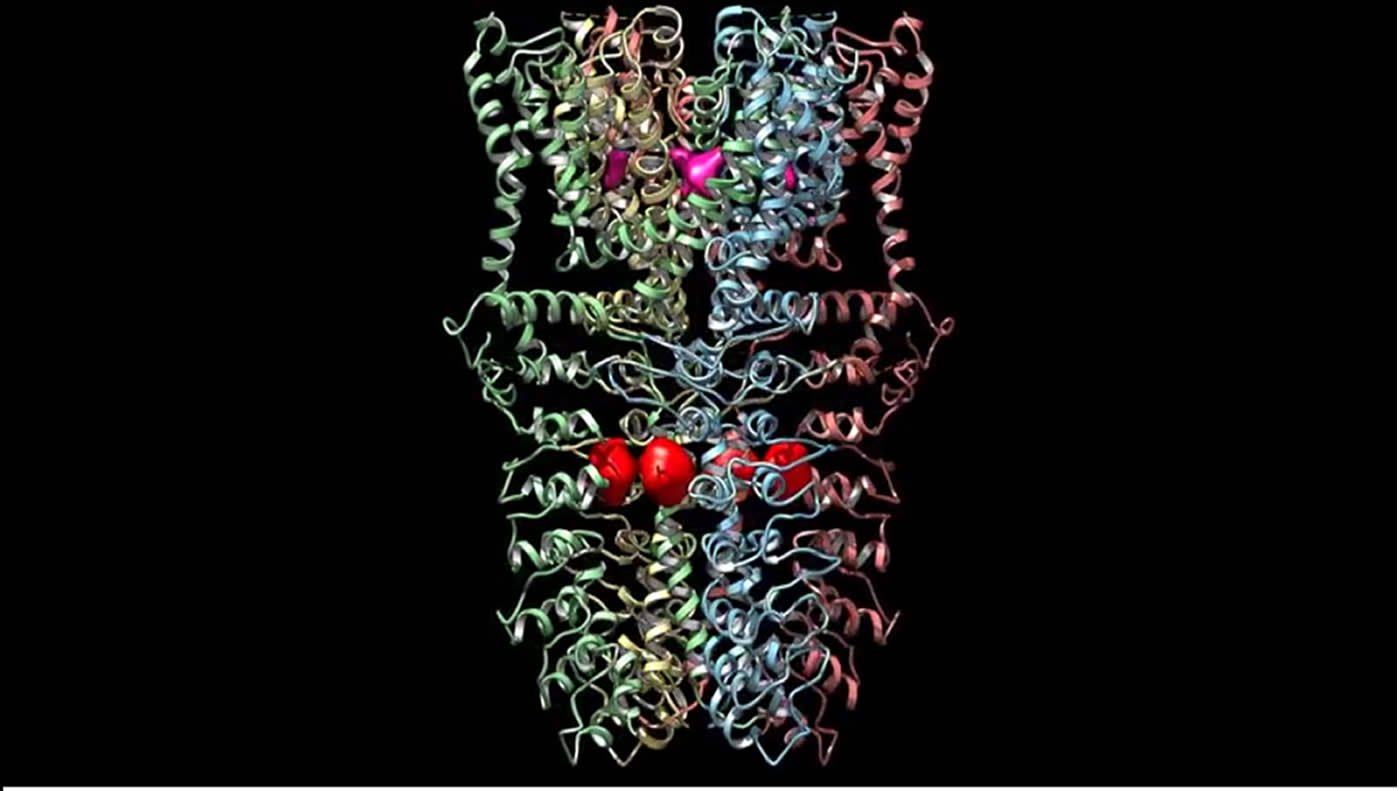 The images the researchers produced for the TRPA1 ion channel show it in three different states—closed, open, and partially open—a range that offers a lot of insight into the channel’s workings. Image credited to the researchers.
Home
Featured

In a feat that would have been unachievable only a few years ago, researchers at UC San Francisco have pulled aside the curtain on a protein informally known as the “wasabi receptor,” revealing at near-atomic resolution structures that could be targeted with anti-inflammatory pain drugs.

Officially named TRPA1 (pronounced “trip A1”), the newly visualized protein resides in the cellular membrane of sensory nerve cells. It detects certain chemical agents originating outside our bodies—pungent irritants found in substances ranging from wasabi to tear gas—but is also triggered by pain-inducing signals originating within, especially those that arise in response to tissue damage and inflammation.

“The pain system is there to warn us when we need to avoid things that can cause injury, but also to enhance protective mechanisms,” said David Julius, PhD, professor and chair of UCSF’s Department of Physiology, and co-senior author of the new study, which appears in the April 8, 2015 online issue of Nature. “We’ve known that TRPA1 is very important in sensing environmental irritants, inflammatory pain, and itch, and so knowing more about how TRPA1 works is important for understanding basic pain mechanisms. Of course, this information may also help guide the design of new analgesic drugs.”

TRPA1 receptor proteins form pores called ion channels in sensory nerve cell membranes. These channels, normally closed, open in response to certain chemical signals, which allows ions to pass into the cell’s interior, triggering a warning impulse. But without knowing enough about the receptor’s overall structure to see where a given compound might connect, designing a drug to alleviate pain by controlling the action of the ion channel is something of a shot in the dark.

Julius and co-senior author Yifan Cheng, PhD, associate professor of biochemistry and biophysics, were able to capture images of TRPA1 that reveal its structure in three dimensions, including a cleft in which an experimental drug molecule sits when it binds to the channel. “A few drugs have been developed that target TRPA1, and in our 3-D structure we can see where one such drug binds,” said Julius. “This provides important insight into how this one major class of drugs interacts with TRPA1 and thus how it may work to block channel function.”

Thanks to a number of innovative hardware and software advances—some developed at UCSF by Cheng and David Agard, PhD, professor of biophysics and biochemistry and a Howard Hughes Medical Institute investigator—cryo-EM has undergone a revolution in image quality over the past several years. Using these tools, the group imaged TRPA1 at a resolution of about 4 angstroms. By way of comparison, the thickness of a credit card is about 8 million angstroms.

Julius and Cheng began their cryo-EM collaborations about six years ago when they were in pursuit of the structure of a related channel called TRPV1. Sometimes called the capsaicin receptor, TRPV1 can be triggered by the chemical that lends “heat” to chili peppers, but it also responds to actual heat when temperatures reach uncomfortably high levels. TRPV1 was the first protein of such small size to be imaged to near-atomic resolution by cryo-EM, work that was reported in Nature in December 2013.

The determination of TRPV1’s structure by cryo-EM “sent shockwaves through the field of structural biology,” Cheng said, because many researchers had dismissed the method as “blob-ology”: until quite recently cryo-EM’s resolution—about 15 angstroms at best—was far too coarse to discern the subtleties of structure in molecules as small as TRP ion channels.

For decades, X-ray crystallography, which involves first coaxing a protein of interest to crystallize, and then analyzing diffraction patterns created as X-rays pass through the crystal, has been the standard method of determining molecular structures. While crystallography can attain resolutions below 3 angstroms, it requires large quantities of a protein. Moreover, obtaining a usable crystal can take years, and many biologically important proteins—especially membrane proteins, which are crucial to cellular signaling—have never been successfully crystallized.

TRP channels were among these, so “we came at it from a different angle,” said Cheng. “Since crystallization was so difficult, we decided to try cyo-EM, which bypasses this requirement.”

For cryo-EM, the proteins of interest are placed in an aqueous solution, then frozen in a very thin sheet of ice, so quickly that the water doesn’t have time to form crystals. It is critical that the ice remains in a glassy state, because formation of any ice crystals would damage proteins embedded within ice and interfere with determining the structure of the proteins in their native conformation.

With many copies of the proteins suspended in this glassy ice, like insects trapped in amber, the researchers capture as many as 100,000 images, then computationally combine these thousands of two-dimensional views to generate the three-dimensional structure of the protein.

In a feat that would have been unachievable only a few years ago, researchers at UC San Francisco have succeeded in visualizing a protein informally known as the “wasabi receptor.” With new cryoEM technology, they’ve revealed at near-atomic resolution structures that could be targeted with anti-inflammatory pain drugs.

The images Julius and Cheng’s group produced for the TRPA1 ion channel show it in three different states—closed, open, and partially open—a range that offers a lot of insight into the channel’s workings. Though the images of TRPA1 generated in the new study represent only slightly different conformations, the scientists expect to generate additional structures in more distinct conformations in future research.

The research was supported by the National Institutes of Health and the UCSF Program for Breakthrough Biomedical Research. Co-first author Paulsen was supported by a Postdoctoral Training Grant from the UCSF Cardiovascular Research Institute, and is currently a Howard Hughes Medical Institute Fellow of the Helen Hay Whitney Foundation.

“Cryo-EM has undergone a ‘resolution revolution’ that has enabled us to literally see TRP channels in all their glory,” said Julius. “We’ve had some idea what TRPA1 might look like, but there’s something elegant and satisfying about obtaining the structure, because seeing really is believing.”

Funding: The research was supported by the National Institutes of Health and the UCSF Program for Breakthrough Biomedical Research.

The TRPA1 ion channel (also known as the wasabi receptor) is a detector of noxious chemical agents encountered in our environment or produced endogenously during tissue injury or drug metabolism. These include a broad class of electrophiles that activate the channel through covalent protein modification. TRPA1 antagonists hold potential for treating neurogenic inflammatory conditions provoked or exacerbated by irritant exposure. Despite compelling reasons to understand TRPA1 function, structural mechanisms underlying channel regulation remain obscure. Here we use single-particle electron cryo- microscopy to determine the structure of full-length human TRPA1 to ~4 Å resolution in the presence of pharmacophores, including a potent antagonist. Several unexpected features are revealed, including an extensive coiled-coil assembly domain stabilized by polyphosphate co-factors and a highly integrated nexus that converges on an unpredicted transient receptor potential (TRP)-like allosteric domain. These findings provide new insights into the mechanisms of TRPA1 regulation, and establish a blueprint for structure-based design of analgesic and anti-inflammatory agents.