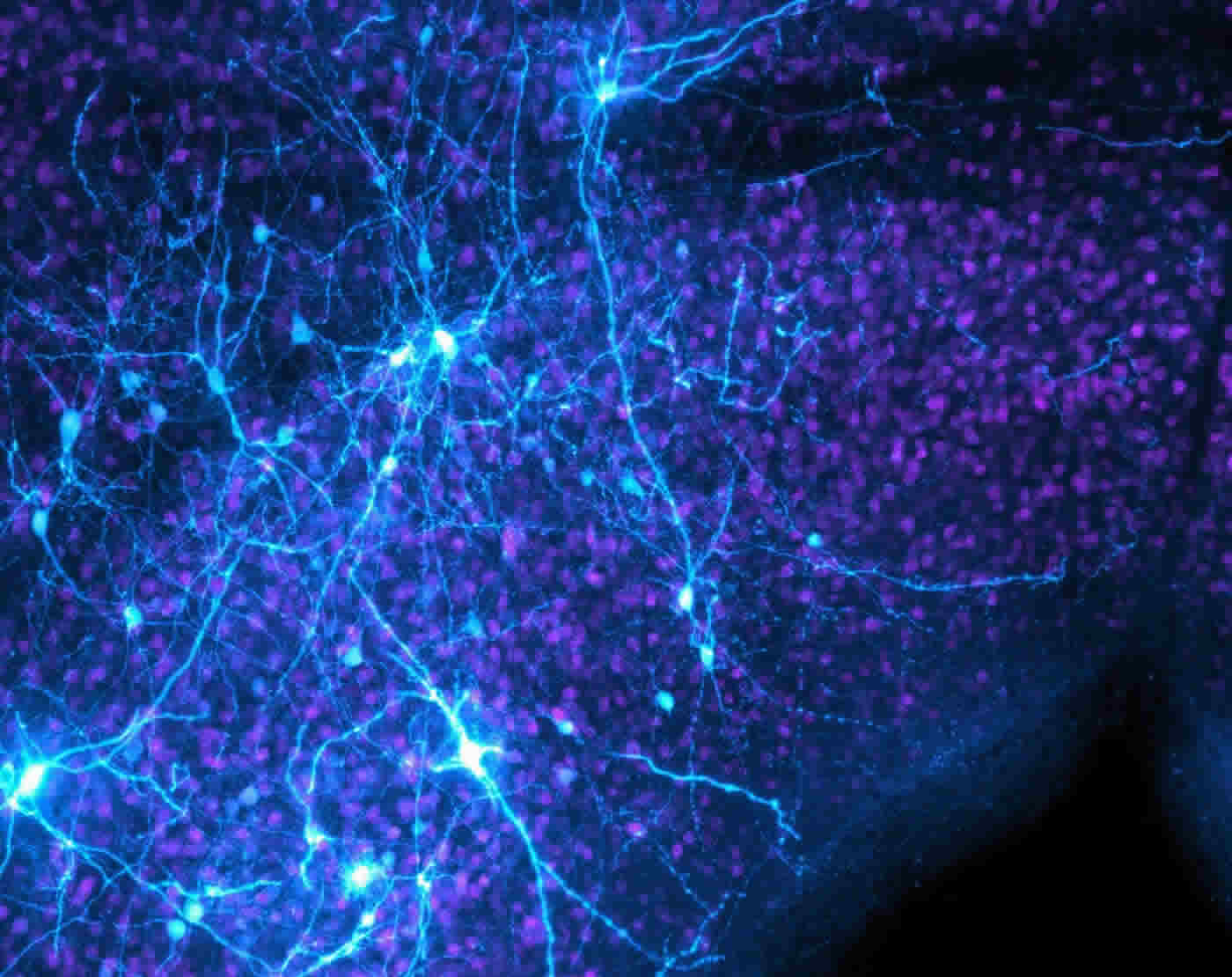 These are escape decision neurons in the mouse midbrain. NeuroscienceNews.com image is credited to Sainsbury Wellcome Centre.

Fright and Flight: Deciding When to Escape

How does your brain decide what to do in a threatening situation? A new paper published in Nature describes a mechanism by which the brain classifies the level of a threat and decides when to escape.

Escaping from a dangerous situation is crucial for survival, but it is also important to only escape from settings that really are dangerous. This is because decisions to escape are almost always trade-offs between safety and access to things of value. For example, animals need to forage, but when they are scared and hiding in their shelter, they are missing out on vital opportunities of finding food and mates.

This dynamic can be completely debilitating in humans with post-traumatic stress disorder (PTSD) or severe anxiety, as such individuals can become confined to their homes due to pathological fear. Thus it is important for brain circuitry to correctly classify and act on threats in the environment.

Dr. Tiago Branco, Senior Research Fellow at Sainsbury Wellcome Centre, commented: “We are excited to have found a subcellular mechanism for computing the very important decision of running away from threats. This level of detailed understanding not only advances our knowledge of how the brain makes fundamental computations, but also gives us an entry point to figure out what goes wrong in conditions that cause abnormally frequent defensive behaviours, and potentially, how to treat them.”

Previous research identified parts of the brain important for escape behaviour, but up until now it wasn’t known whether these regions were also involved in evaluating threat level and implementing decisions to escape. A team of neuroscientists led by Dr. Branco working first at the MRC Laboratory of Molecular Biology (LMB) and recently at the Sainsbury Wellcome Centre, systematically tested the innate reactions of mice to looming shadows, as would occur from a bird of prey, an evolutionarily conserved behaviour that is not learnt. Using this approach they have deciphered how escape decisions are implemented in the brain at the algorithmic and mechanistic level, describing the process as a ‘threshold computation’ of threat level.

The work demonstrated that these decisions are made at the connections between two different parts of the brain: the superior colliculus (SC), which is responsible for integrating information about the threat and estimating the threat level, and the periaqueductal gray (PAG), which represents the activity above the threshold and causes the animal to escape.

The threshold mechanism arises because the SC-PAG connection is very weak and unreliable, so it fails most of the time. It is only when the threat level rises and is sustained that there is sufficient activity to overcome this weak connection and initiate escape. In this way the decision is computed at the level of the synaptic connection between the SC and PAG.

The study makes use of a wide range of techniques, including quantitative behaviour assays that manipulate the probability of whether the animal escapes to threats, and neural activity recordings with head-mounted microscopes and high-density Neuropixels silicon probes. In addition, a special form of chemogenetics was used to specifically inactivate the SC-PAG synapse and thereby prove that the computation of this threshold is implemented by this synaptic connection. Furthermore a computational model was developed that describes the observed behaviour.

The next piece of the puzzle will be to understand how the threshold for the decision is modulated based on past experience and the current conditions of the environment. “Successfully escaping from threats can be a very complicated process that relies on your particular representation of the environment you are in, and what to expect from it. This is at the core of how the brain generates behaviour, and now that we have figured out a critical part of the brain neural circuitry that controls the decision to escape, we can start to explore the computation of complex variables that influence escape decisions, such as how likely it is that safety can be reached, and what are the fastest routes to possible shelters,” Dr. Branco concluded.

Escaping from imminent danger is an instinctive behaviour that is fundamental for survival, and requires the classification of sensory stimuli as harmless or threatening. The absence of threat enables animals to forage for essential resources, but as the level of threat and potential for harm increases, they have to decide whether or not to seek safety. Despite previous work on instinctive defensive behaviours in rodents little is known about how the brain computes the threat level for initiating escape. Here we show that the probability and vigour of escape in mice scale with the saliency of innate threats, and are well described by a model that computes the distance between the threat level and an escape threshold. Calcium imaging and optogenetics in the midbrain of freely behaving mice show that the activity of excitatory neurons in the deep layers of the medial superior colliculus (mSC) represents the saliency of the threat stimulus and is predictive of escape, whereas glutamatergic neurons of the dorsal periaqueductal grey (dPAG) encode exclusively the choice to escape and control escape vigour. We demonstrate a feed-forward monosynaptic excitatory connection from mSC to dPAG neurons, which is weak and unreliable—yet required for escape behaviour—and provides a synaptic threshold for dPAG activation and the initiation of escape. This threshold can be overcome by high mSC network activity because of short-term synaptic facilitation and recurrent excitation within the mSC, which amplifies and sustains synaptic drive to the dPAG. Therefore, dPAG glutamatergic neurons compute escape decisions and escape vigour using a synaptic mechanism to threshold threat information received from the mSC, and provide a biophysical model of how the brain performs a critical behavioural computation.