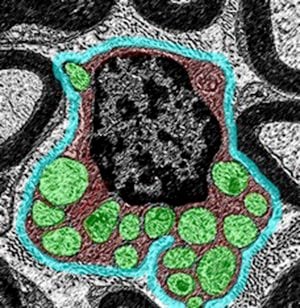 Anyone whose hand or foot has “fallen asleep” has an idea of the numbness and tingling often experienced by people with peripheral nerve damage. The condition also can cause a range of other symptoms, including unrelenting pain, stinging, burning, itching and sensitivity to touch.

Although peripheral neuropathies afflict some 20 million Americans, their underlying causes are not completely understood. Much research has focused on the breakdown of cellular energy factories in nerve cells as a contributing factor.

Now, new research at Washington University School of Medicine in St. Louis points to a more central role in damage to energy factories in other cells: Schwann cells, which grow alongside neurons and enable nerve signals to travel from the spinal cord to the tips of the fingers and toes.

The finding may lead to new therapeutic strategies to more effectively treat symptoms of this highly variable disorder, the scientists report in the journal Neuron.

“We found that a toxic substance builds up in Schwann cells that have disabled energy factories, leading to the same kind of nerve damage seen in patients with neuropathies,” says senior author Jeffrey Milbrandt, MD, PhD, the James S. McDonnell Professor of Genetics and head of the Department of Genetics. “Now, we’re evaluating whether drugs can block the buildup of that toxin, which could lead to a new treatment for the condition.”

The most common cause of peripheral neuropathy is diabetes, which accounts for about half of all cases. The condition also can occur in cancer patients treated with chemotherapy, which can damage nerves.

The researchers showed that the crippled mitochondria activated a stress response in the Schwann cells. Instead of synthesizing fatty acids, a key component of Schwann cells, the cells burned fatty acids for fuel.

And the bad news doesn’t end there. Eventually, the toxin leaks out of the Schwann cells and onto the nerve axons. Studying neurons in petri dishes, the researchers showed that acylcarnitines damage nerve axons and disrupt the ability of nerves to relay signals.

“The toxin leaking out of the Schwann cells and onto the adjacent nerve axons causes damage that results in pain, numbness, tingling and other symptoms,” Milbrandt says. “We think that is a likely mechanism to explain the degeneration of axons that is known to occur in peripheral neuropathies.”

The new research suggests that drugs that inhibit the buildup of acylcarnitines may block axonal degeneration. Milbrandt and his team now are evaluating the drugs in mice with disabled Schwann cells to see if they can slow or alleviate the decay of axons.

Notes about this peripheral neuropathy research