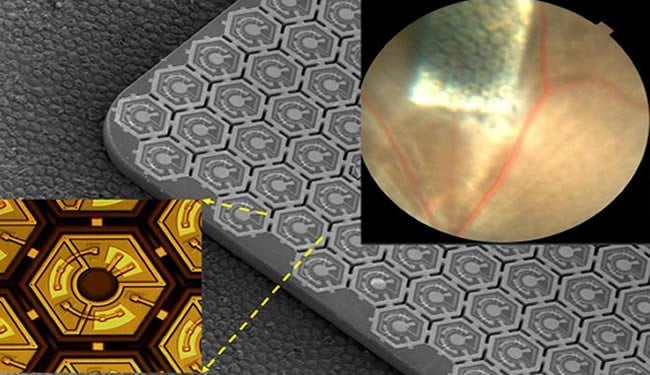 Using tiny solar-panel-like cells surgically placed underneath the retina, scientists at the Stanford University School of Medicine have devised a system that may someday restore sight to people who have lost vision because of certain types of degenerative eye diseases.

This device — a new type of retinal prosthesis — involves a specially designed pair of goggles, which are equipped with a miniature camera and a pocket PC that is designed to process the visual data stream. The resulting images would be displayed on a liquid crystal microdisplay embedded in the goggles, similar to what’s used in video goggles for gaming. Unlike the regular video goggles, though, the images would be beamed from the LCD using laser pulses of near-infrared light to a photovoltaic silicon chip — one-third as thin as a strand of hair — implanted beneath the retina.

Electric currents from the photodiodes on the chip would then trigger signals in the retina, which then flow to the brain, enabling a patient to regain vision.

A study, to be published online May 13 in Nature Photonics, discusses how scientists tested the photovoltaic stimulation using the prosthetic device’s diode arrays in rat retinas in vitro and how they elicited electric responses, which are widely accepted indicators of visual activity, from retinal cells . The scientists are now testing the system in live rats, taking both physiological and behavioral measurements, and are hoping to find a sponsor to support tests in humans.

“It works like the solar panels on your roof, converting light into electric current,” said Daniel Palanker, PhD, associate professor of ophthalmology and one of the paper’s senior authors. “But instead of the current flowing to your refrigerator, it flows into your retina.” Palanker is also a member of the Hansen Experimental Physics Laboratory at Stanford and of the interdisciplinary Stanford research program, Bio-X. The study’s other senior author is Alexander Sher, PhD, of the Santa Cruz Institute of Particle Physics at UC Santa Cruz; its co-first authors are Keith Mathieson, PhD, a visiting scholar in Palanker’s lab, and James Loudin, PhD, a postdoctoral scholar. Palanker and Loudin jointly conceived and designed the prosthesis system and the photovoltaic arrays.

There are several other retinal prostheses being developed, and at least two of them are in clinical trials. A device made by the Los Angeles-based company Second Sight was approved in April for use in Europe, and another prosthesis-maker, a German company called Retina Implant AG, announced earlier this month results from its clinical testing in Europe.

Unlike these other devices — which require coils, cables or antennas inside the eye to deliver power and information to the retinal implant — the Stanford device uses near-infrared light to transmit images, thereby avoiding any need for wires and cables, and making the device thin and easily implantable.

“The current implants are very bulky, and the surgery to place the intraocular wiring for receiving, processing and power is difficult,” Palanker said. The device developed by his team, he noted, has virtually all of the hardware incorporated externally into the goggles. “The surgeon needs only to create a small pocket beneath the retina and then slip the photovoltaic cells inside it.” What’s more, one can tile these photovoltaic cells in larger numbers inside the eye to provide a wider field of view than the other systems can offer, he added.

Stanford University holds patents on two technologies used in the system, and Palanker and colleagues would receive royalties from the licensing of these patents.

The proposed prosthesis is intended to help people suffering from retinal degenerative diseases, such as age-related macular degeneration and retinitis pigmentosa. The former is the foremost cause of vision loss in North America, and the latter causes an estimated 1.5 million people worldwide to lose sight, according to the nonprofit group Foundation Fighting Blindness. In these diseases, the retina’s photoreceptor cells slowly degenerate, ultimately leading to blindness. But the inner retinal neurons that normally transmit signals from the photoreceptors to the brain are largely unscathed. Retinal prostheses are based on the idea that there are other ways to stimulate those neurons.

The Stanford device uses near-infrared light, which has longer wavelength than normal visible light. It’s necessary to use such an approach because people blinded by retinal degenerative diseases still have photoreceptor cells, which continue to be sensitive to visible light. “To make this work, we have to deliver a lot more light than normal vision would require,” said Palanker. “And if we used visible light, it would be painfully bright.” Near-infrared light isn’t visible to the naked eye, though it is “visible” to the diodes that are implanted as part of this prosthetic system, he said.

Palanker explained what he’s done by comparing the eye to camera, in which the retina is the film or the digital chip, and each photoreceptor is a pixel. “In our model we replace those photoreceptors with photosensitive diodes,” he said. “Every pixel is like a little solar cell; you send light, then you get current and that current stimulates neurons in the inner nuclear layer of the retina.” That, in turn, should have a cascade effect, activating the ganglion cells on the outer layer of the retina, which send the visual information to the brain that allows us to see.

For this study, Palanker and his team fabricated a chip about the size of a pencil point that contains hundreds of these light-sensitive diodes. To test how these chips responded, the researchers used retinas from both normal rats and blind rats that serve as models of retinal degenerative disease. The scientists placed an array of photodiodes beneath the retinas and placed a multi-electrode array above the layer of ganglion cells to gauge their activity. The scientists then sent pulses of light, both visible and near-infrared, to produce electric current in the photodiodes and measured the response in the outer layer of the retinas.

In the normal rats, the ganglions were stimulated, as expected, by the normal visible light, but they also presented a similar response to the near-infrared light: That’s confirmation that the diodes were triggering neural activity.

How Do Tired Animals Stay Awake?

While there was concern that exposure to such doses of near-infrared light could cause the tissue to heat up, the study found that the irradiation was still one-hundredth of the established ocular safety limit.

Since completing the study, Palanker and his colleagues have implanted the photodiodes in rats’ eyes and been observing and measuring their effect for the last six months. He said preliminary data indicates that the visual signals are reaching the brain in normal and in blind rats, though the study is still under way.

While this and other devices could help people to regain some sight, the current technologies do not allow people to see color, and the resulting vision is far from normal, Palanker said.

Funding was provided by the National Institutes of Health, the Air Force Office of Scientific Research and Stanford’s Bio-X program. Information about Stanford’s Department of Ophthalmology, which also supported the research, is available athttp://ophthalmology.stanford.edu/.