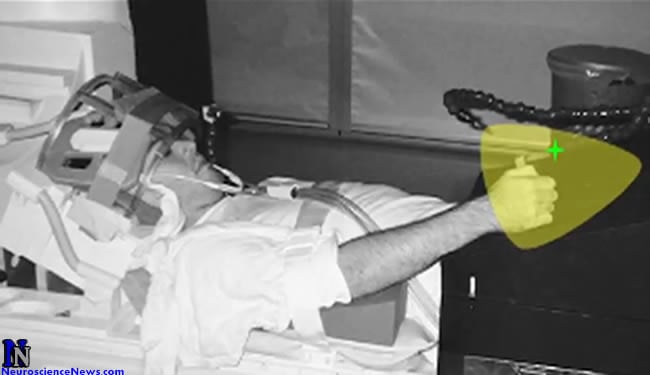 Bringing the real world into the brain scanner, researchers at The University of Western Ontario from The Centre for Brain and Mind can now determine the action a person was planning, mere moments before that action is actually executed.

The findings were published this week in the prestigious Journal of Neuroscience, in the paper, “Decoding Action Intentions from Preparatory Brain Activity in Human Parieto-Frontal Networks.”

“This is a considerable step forward in our understanding of how the human brain plans actions,” says Jason Gallivan, a Western Neuroscience PhD student, who was the first author on the paper.

Over the course of the one-year study, human subjects had their brain activity scanned using functional magnetic resonance imaging (fMRI) while they performed one of three hand movements: grasping the top of an object, grasping the bottom of the object, or simply reaching out and touching the object. The team found that by using the signals from many brain regions, they could predict, better than chance, which of the actions the volunteer was merely intending to do, seconds later.

“Neuroimaging allows us to look at how action planning unfolds within human brain areas without having to insert electrodes directly into the human brain. This is obviously far less intrusive,” explains Western Psychology professor Jody Culham, who was the paper’s senior author.

Anyone Can Be Trained to Be Creative

“Being able to predict a human’s desired movements using brain signals takes us one step closer to using those signals to control prosthetic limbs in movement-impaired patient populations, like those who suffer from spinal cord injuries or locked-in syndrome,” says Gallivan.

This research is funded by the Canadian Institutes of Health Research (CIHR). A past recipient of the CIHR Brain Star Award, Gallivan is funded by a Natural Sciences and Engineering Research Council of Canada (NSERC) graduate scholarship.