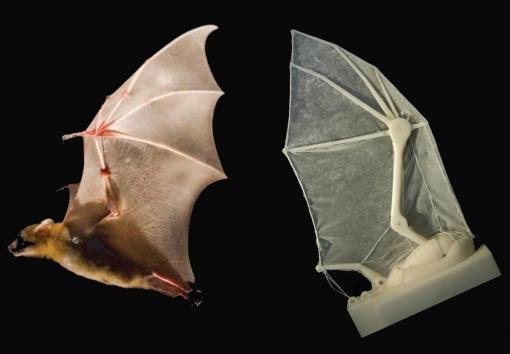 Researchers at Brown University have developed a robotic bat wing that is providing valuable new information about dynamics of flapping flight in real bats.

The robot, which mimics the wing shape and motion of the lesser dog-faced fruit bat, is designed to flap while attached to a force transducer in a wind tunnel. As the lifelike wing flaps, the force transducer records the aerodynamic forces generated by the moving wing. By measuring the power output of the three servo motors that control the robot’s seven movable joints, researchers can evaluate the energy required to execute wing movements.

Testing showed the robot can match the basic flight parameters of bats, producing enough thrust to overcome drag and enough lift to carry the weight of the model species.

A paper describing the robot and presenting results from preliminary experiments is published in the journal Bioinspiration and Biomimetics. The work was done in labs of Brown professors Kenneth Breuer and Sharon Swartz, who are the senior authors on the paper. Breuer, an engineer, and Swartz, a biologist, have studied bat flight and anatomy for years.

The faux flapper generates data that could never be collected directly from live animals, said Joseph Bahlman, a graduate student at Brown who led the project. Bats can’t fly when connected to instruments that record aerodynamic forces directly, so that isn’t an option; and bats don’t take requests.

“We can’t ask a bat to flap at a frequency of eight hertz then raise it to nine hertz so we can see what difference that makes,” Bahlman said. “They don’t really cooperate that way.”

But the model does exactly what the researchers want it to do. They can control each of its movement capabilities, kinematic parameters, individually. That way they can adjust one parameter while keeping the rest constant to isolate the effects.

“We can answer questions like, ‘Does increasing wing beat frequency improve lift and what’s the energetic cost of doing that?’” Bahlman said. “We can directly measure the relationship between these kinematic parameters, aerodynamic forces, and energetics.”

Detailed experimental results from the robot will be described in future research papers, but this first paper includes some preliminary results from a few case studies.

One experiment looked at the aerodynamic effects of wing folding. Bats and some birds fold their wings back during the upstroke. Previous research from Brown had found that folding helped the bats save energy, but how folding affected aerodynamic forces wasn’t clear. Testing with the robot wing shows that folding is all about lift.

In a flapping animal, positive lift is generated by the downstroke, but some of that lift is undone by the subsequent upstroke, which generates negative lift. By running trials with and without wing folding, the robot showed that folding the wing on the upstroke dramatically decreases that negative lift, increasing net lift by 50 percent.

Data like that will not only give new insights into the mechanics of bat flight, it could aid the design of small flapping aircraft. The research was funded by the U.S. Air Force Office of Scientific Research and the National Science Foundation.

Inspired by the real thing

Bat wings are complex things. They span most of the length of a bat’s body, from shoulder to foot. They are supported and moved by two arm bones and five finger-like digits. Over those bones is a super-elastic skin that can stretch up to 400 percent without tearing. The eight-inch robot mimics that anatomy with plastic bones carefully fabricated on a 3-D printer to match proportions of a real bat. The skin is made of a silicone elastomer. The joints are actuated by servo motors that pull on tendon-like cables, which in turn pull on the joints.

The robot doesn’t quite match the complexity of a real bat’s wing, which has 25 joints and 34 degrees of freedom. An exact simulation isn’t feasible given today’s technology and wouldn’t be desirable anyway, Bahlman said. Part of why the model is useful is that it distills bat flapping down to five fundamental parameters: flapping frequency, flapping amplitude, the angle of the flap relative to the ground, the amount of time used for the downstroke, and the extent to which the wings can fold back.

Experimental data aside, Bahlman said there were many lessons learned just in building the robot and getting it to work properly. “We learned a lot about how bats work from trying to duplicate them and having things go wrong,” he said.

During testing, for example, the tongue and groove joint used for the robot’s elbow broke repeatedly. The forces on the wing would spread open the groove, and eventually break it open. Bahlman eventually wrapped steel cable around the joint to keep it intact, similar to the way ligaments hold joints together in real animals.

The fact that the elbow was a characteristic weak point in the robot might help to explain the musculature of elbows in real bats. Bats have a large set of muscles at the elbow that are not positioned to flex the joint. In humans, these muscles are used in the motion that helps us turn our palms up or down. Bats can’t make that motion, however, so the fact that these muscles are so large was something of a mystery. Bahlman’s experience with the robot suggests these muscles may be adapted to resist bending in a direction that would break the joint open.

The wing membrane provided more lessons. It often tore at the leading edge, prompting Bahlman to reinforce that spot with elastic threads. The fix ended up looking a lot like the tendon and muscle that reinforce leading edges in bats, underscoring how important those structures are.

Now that the model is operational, Bahlman has lots of plans for it.

“The next step is to start playing with the materials,” he said. “We’d like to try different wing materials, different amounts of flexibility on the bones, looking to see if there are beneficial tradeoffs in these material properties.”