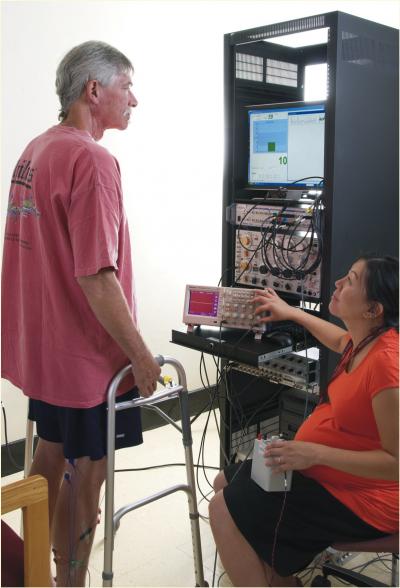 A training regimen to adjust the body’s motor reflexes may help improve mobility for some people with incomplete spinal cord injuries, according to a study supported by the National Institutes of Health.

During training, the participants were instructed to suppress a knee jerk-like reflex elicited by a small shock to the leg. Those who were able to calm hyperactive reflexes – a common effect of spinal cord injuries – saw improvements in their walking.

The study was led by Aiko Thompson, Ph.D., and Jonathan Wolpaw, M.D., both of whom hold appointments at the New York state Department of Health and the State University of New York in Albany, and at Columbia University in New York City. The study took place at Helen Hayes Hospital in West Haverstraw, N. Y. It was funded in part by NIH’s National Institute of Neurological Disorders and Stroke (NINDS), and published in the Journal of Neuroscience.

“People tend to think of reflexes as fixed, but in reality, normal movement requires constant fine tuning of reflexes by the brain. Loss of that fine-tuning is an important part of the disability that comes with a spinal cord injury,” said Dr. Wolpaw, a research physician and professor at the Wadsworth Center, the state health department’s public health laboratory.

When the brain makes a decision to move, it sends signals that travel through the spinal cord to the appropriate muscles. Spinal reflexes – controlled by local circuits of nerve cells in the spinal cord – provide a way for the body to react and move quickly without a conscious decision from the brain. “They enable you to jerk your hand away from a hot stove before you’ve registered the pain and experienced severe burns,” Dr. Wolpaw said. “The brain can gradually enhance or suppress reflexes as needed,” he said.

Some spinal cord injuries involve a complete break and paralysis below the point of injury. More typically, only part of the spinal cord is damaged, leading to less severe disability. After an incomplete injury, some reflexes may be weakened while others become exaggerated. These hyperactive reflexes can cause spasticity (muscle stiffness) and abnormal patterns of muscle use during movement.

The study by Drs. Thompson and Wolpaw involved 13 people who were still able to walk after incomplete spinal cord injuries that had occurred from eight months to 50 years prior to the study. All had spasticity and an impaired ability to walk. The goal was to determine if these individuals could gain mobility by learning to suppress a spinal H-reflex, which is elicited by electrical stimulation rather than by a tendon stretch. H-reflexes are routinely measured for diagnosing nerve disorders and injuries, but this is the first study to examine whether consciously modifying an H-reflex can help people with spinal cord injuries.

Participants in the study received electrical stimulation to the soleus (calf muscle) of their weaker leg while standing with support. The first two weeks of the study involved baseline measurements of the resulting reflex. During the next 10 weeks, nine participants underwent three training sessions per week, during which they viewed the size of their reflexes on a monitor and were encouraged to suppress it. A control group of four participants received the stimulation but no feedback about their reflexes. Before and after these sessions, the researchers measured the participants’ walking speed over a distance of 10 meters, and monitored their gait symmetry with electronic shoe implants.

Six of the nine participants in the training group were able to suppress their reflexes. Their walking speed increased by 59 percent on average, and their gait became more symmetrical. These improvements in speed and symmetry were not seen in three participants who were unable to suppress their reflexes, or in the control group. Many participants also spontaneously told the researchers they were noticing improvements in daily living activities. About 85 percent of these comments came from people who were able to control their reflexes after several weeks of training.

Because this was a small study, a larger multi-center trial would be necessary to assess the clinical benefits of the therapy. However, the results are encouraging, said Daofen Chen, Ph.D., a program director at NINDS. “The findings offer hope that reflex conditioning can produce meaningful improvements for some patients with incomplete spinal cord injuries. It is important to realize that this approach rests on a foundation of basic research on the physiology of spinal reflexes,” he said.

NINDS has supported Dr. Wolpaw’s work on reflex training for nearly three decades. Until recently, this work was done mostly on rats, and focused on reflex control in the uninjured spinal cord. Those studies helped demonstrate that spinal reflexes can change with training, defined many of the complex modifications in brain and spinal cord that underlie reflex change, and established reflex training as a model for studying how circuits in the brain change with learning.

In 2006, Dr. Wolpaw and colleagues reported that reflex training improved mobility for rats with spinal cord injury. He soon brought Dr. Thompson to the Wadsworth Center to design a reflex training protocol for people, and the current study began in 2008. Ferne Pomerantz, M.D., director of spinal cord injury rehabilitation services at Helen Hayes Hospital, was the recruiting physician for the study.

Dr. Wolpaw said he views reflex training, also known as reflex conditioning, as a complement to current rehabilitation practices. The technique could be tailored to focus on specific reflexes that affect different muscle groups, and in some cases, to increase reflexes instead of decrease them. In its 2006 study, his group found that enhancing soleus H-reflex was beneficial for rats that had spinal cord injuries predominantly characterized by weakness without spasticity.

New Gene Therapy Pathway Could Protect Us From Cancer and Dementia

In the current study, it is not clear why only two-thirds of the patients with spinal cord injury were able to suppress their reflexes and benefit from training. However, Dr. Wolpaw has found similar response rates in people and animals without spinal cord injuries.

Dr. Thompson plans to study how durable the effects of training are, but such research presents a design challenge, she said. “Once people noticed their mobility had improved, they started exercising more and getting involved with other types of therapy. Those activities are likely to have additional benefits, and will be difficult to separate from the long-term effects of our reflex conditioning protocol,” she said.

Contact: Daniel Stimson – NIH/National Institute of Neurological Disorders and Stroke
Source: NIH/National Institute of Neurological Disorders and Stroke
Image Source: Image credited to Helen Hayes Hospital
Original Research: “Operant conditioning of a spinal reflex can improve locomotion after spinal cord injury in humans” by Thompson AK et al. in Journal of Neuroscience 6 February 2013 (The research paper is not available at this time. When it is available for viewing, the link will be posted here.)
Full access research paper for “Operant Conditioning of H-Reflex Can Correct a Locomotor Abnormality after Spinal Cord Injury in Rats” by Yi Chen, Xiang Yang Chen, Lyn B. Jakeman, Lu Chen, Bradford T. Stokes, and Jonathan R. Wolpaw in Journal of Neuroscience 29 November 2006, 26(48): 12537-12543 doi: 10.1523/​JNEUROSCI.2198-06.2006

A Link Between Gut Microbiota and Chronic Inflammatory Diseases Like Arthritis