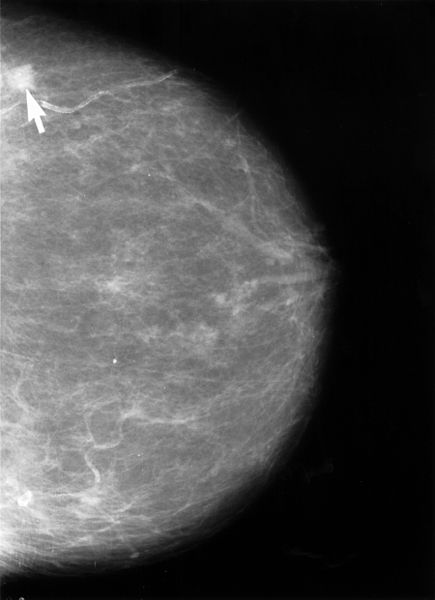 A new study has discovered that 23 percent, or almost 1 in 4, women with newly diagnosed breast cancer reported symptoms associated with PTSD shortly after their diagnosis. The report also claims there is an increased risk for PTSD among black and Asian women. The image shows a mammogram with a small, cancerous lesion and calcific deposits in veins.
Home
Featured

A study by researchers at the Herbert Irving Comprehensive Cancer Center (HICCC) at NewYork-Presbyterian/Columbia University Medical Center, has found that nearly one in four women (23 percent) newly diagnosed with breast cancer reported symptoms consistent with post-traumatic stress disorder (PTSD) shortly after diagnosis, with increased risk among black and Asian women. The research has been e-published in the Journal of the National Cancer Institute.

“This study is one of the first to evaluate the course of PTSD after a diagnosis of breast cancer,” said lead author Alfred I. Neugut, MD, PhD, the Myron M. Studner Professor of Cancer Research, professor of medicine and epidemiology, at Columbia University’s College of Physicians & Surgeons and Mailman School of Public Health, and a member of the HICCC.

“We analyzed interview responses from more than 1,100 women,” said Dr. Neugut. “During the first two to three months after diagnosis, nearly a quarter of them met the criteria for PTSD, although the symptoms declined over the next three months. Younger women were more likely to develop symptoms of PTSD, and data suggest Asian and black women are at a more than 50 percent higher risk than white women.”

The 1,139 research participants were part of the Breast Cancer Quality of Care Study (BQUAL). Between 2006 and 2010, women with newly diagnosed breast cancer, stages I to III, over the age of 20 were recruited from NewYork-Presbyterian/Columbia University Medical Center and Mount Sinai School of Medicine in New York City; the Henry Ford Health System in Detroit; and Kaiser-Permanente in Northern California. Each participant completed three phone interviews. The first was two to three months after diagnosis and before the third chemotherapy cycle, if the patient was receiving chemotherapy. The second interview was four months after diagnosis, and the third was six months after diagnosis.

“The ultimate outcome of this research is to find ways to improve the quality of patients’ lives,” said Dr. Neugut, who is also an oncologist at NewYork-Presbyterian Hospital/Columbia. “If we can identify potential risk factors for PTSD, when women are diagnosed with breast cancer, we could provide early prevention and intervention to minimize PTSD symptoms. This approach might also have an indirect impact on the observed racial disparity in breast cancer survival.”

The research team believes that these findings may apply to patients with other cancer diagnoses as well. Dr. Neugut noted that in previous research, symptoms of PTSD have been reported following prostate cancer and lymphoma diagnoses.

Notes about this PTSD research