Working in mice, scientists at Washington University School of Medicine in St. Louis have devised a treatment that prevents the optic nerve injury that occurs in glaucoma, a neurodegenerative disease that is a leading cause of blindness.

Researchers increased the resistance of optic nerve cells to damage by repeatedly exposing the mice to low levels of oxygen similar to those found at high altitudes. The stress of the intermittent low-oxygen environment induces a protective response called tolerance that makes nerve cells — including those in the eye — less vulnerable to harm.

The study, published online in Molecular Medicine, is the first to show that tolerance induced by preconditioning can protect against a neurodegenerative disease.

Stress is typically thought of as a negative phenomenon, but senior author Jeffrey M. Gidday, PhD, associate professor of neurological surgery and ophthalmology, and others have previously shown that the right kinds of stress, such as exercise and low-oxygen environments, can precondition cells and induce changes that make them more resistant to injury and disease.

Scientists previously thought tolerance in the central nervous system only lasted for a few days. But last year Gidday developed a preconditioning protocol​ that extended the effects of tolerance from days to months. By exposing mice to hypoxia, or low oxygen concentrations, several times over a two-week period, Gidday and colleagues triggered an extended period of tolerance. After preconditioning ended, the brain was protected from stroke damage for at least 8 weeks.

“Once we discovered tolerance could be extended, we wondered whether this protracted period of injury resistance could also protect against the slow, progressive loss of neurons that characterizes neurodegenerative diseases,” Gidday says.

To find out, Gidday turned to an animal model of glaucoma, a condition linked to increases in the pressure of the fluid that fills the eye. The only treatments for glaucoma are drugs that reduce this pressure; there are no therapies designed to protect the retina and optic nerves from harm.

Scientists classify glaucoma as a neurodegenerative disease based on how slowly and progressively it kills retinal ganglion cells. The bodies of these cells are located in the retina of the eye; their branches or axons come together in bundles and form the optic nerves. Scientists don’t know if damage begins in the bodies or axons of the cells, but as more and more retinal ganglion cells die, patients experience peripheral vision loss and eventually become blind.

For the new study, Yanli Zhu, MD, research instructor in neurosurgery, induced glaucoma in mice by tying off vessels that normally allow fluid to drain from the eye. This causes pressure in the eye to increase. Zhu then assessed how many cell bodies and axons of retinal ganglion cells were intact after three or 10 weeks.

Gidday is currently investigating which genes are activated or repressed by preconditioning. He hopes to identify the changes in gene activity that make cells resistant to damage.

“Previous research has shown that there are literally hundreds of survival genes built into our DNA that are normally inactive,” Gidday says. “When these genes are activated, the proteins they encode can make cells much less vulnerable to a variety of injuries.”

Identifying specific survival genes should help scientists develop drugs that can activate them, according to Gidday.

“Neurons in the central nervous system appear to be hard-wired for survival,” Gidday says. “This is one of the first steps in establishing a framework for how we can take advantage of that metaphorical wiring and use positive stress to help treat a variety of neurological diseases.” 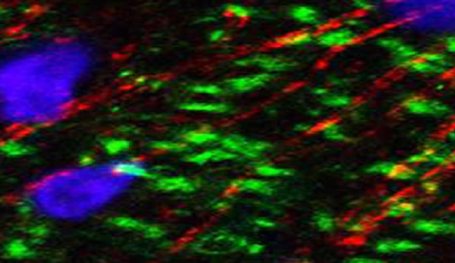 Scientists have found a way in mice to prevent damage to the optic nerves that normally occurs in glaucoma. Using high-power micrographs like this one of the optic nerve in cross-section, they can quantify glaucoma damage to the axons of the retinal ganglion axons passing through the nerve. In this image, those axons are green, and the branches and nuclei of the astrocytes surrounding them are red and blue, respectively. Image is adapted and distorted from press release image credited to Jeff Gidday, PhD.