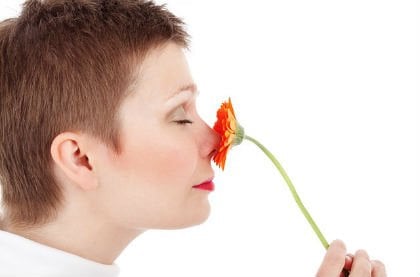 By exposing each receptor to a very small concentration, 1, 10, or 100 micromoles, of 73 odorants, such as vanillin or guaiacol, researchers able to identify 27 receptors that had a significant response to at least one odorant. This illustrative image shows a woman smelling a flower. Credit provided below.

No Two People Smell the Same

With nearly a million variations on 400 smell receptors, everyone senses smell differently.

A difference at the smallest level of DNA — one amino acid on one gene — can determine whether you find a given smell pleasant. A different amino acid on the same gene in your friend’s body could mean he finds the same odor offensive, according to researchers at Duke University.

There are about 400 genes coding for the receptors in our noses, and according to the 1000 Genomes Project, there are more than 900,000 variations of those genes. These receptors control the sensors that determine how we smell odors. A given odor will activate a suite of receptors in the nose, creating a specific signal for the brain.

But the receptors don’t work the same for all of us, said Hiroaki Matsunami, Ph.D., associate professor of molecular genetics and microbiology at the Duke University School of Medicine. In fact, when comparing the receptors in any two people, they should be about 30 percent different, said Matsunami, who is also a member of the Neurobiology Graduate Program and the Duke Institute for Brain Sciences.

“There are many cases when you say you like the way something smells and other people don’t. That’s very common,” Matsunami said. But what the researchers found is that no two people smell things the same way. “We found that individuals can be very different at the receptor levels, meaning that when we smell something, the receptors that are activated can be very different (from one person to the next) depending on your genome.”

The study didn’t look at the promoter regions of the genes, which are highly variable, or gene copy number variation, which is very high in odor receptors, so the 30 percent figure for the difference between individuals is probably conservative, Matsunami said.

While researchers had earlier identified the genes that encode for odor receptors, it has been a mystery how the receptors are activated, Matsunami said. To determine what turns the receptors on, his team cloned more than 500 receptors each from 20 people that had slight variations of only one or two amino acids and systematically exposed them to odor molecules that might excite the receptors.

By exposing each receptor to a very small concentration — 1, 10, or 100 micromoles — of 73 odorants, such as vanillin or guaiacol, the group was able to identify 27 receptors that had a significant response to at least one odorant. This finding, published in the December issue of Nature Neuroscience, doubles the number of known odorant-activated receptors, bringing the number to 40.

Matsunami said this research could have a big impact for the flavors, fragrance, and food industries.

“These manufacturers all want to know a rational way to produce new chemicals of interest, whether it’s a new perfume or new-flavored ingredient, and right now there’s no scientific basis for doing that,” he said. “To do that, we need to know which receptors are being activated by certain chemicals and the consequences of those activations in terms of how we feel and smell.”

Funding for this research came from the National Institutes of Health.