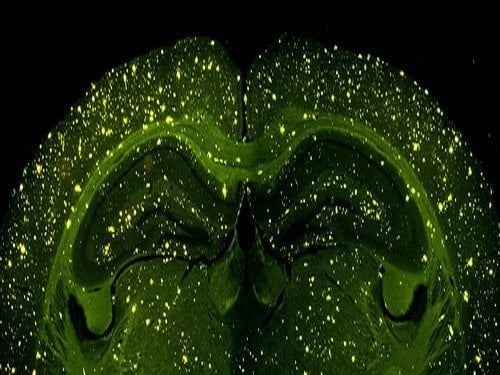 Researchers at Sanford-Burnham Medical Research Institute have discovered a new molecular clue about the cause of brain cell death in Alzheimer’s, Parkinson’s and Huntington’s diseases.

New pathway to Parkinson’s and Alzheimer’s diseases
Sanford-Burnham researchers uncover new clues about the cause of brain cell death in neurodegenerative disorders such as Parkinson’s, Alzheimer’s and Huntington’s diseases

LA JOLLA, Calif., July 29, 2010 – Although their genetic underpinnings differ, Alzheimer’s disease, Parkinson’s disease and Huntington’s disease are all characterized by the untimely death of brain cells. What triggers cell death in the brain? According to a new study published by researchers at Sanford-Burnham Medical Research Institute (Sanford-Burnham) in the July 30 issue of Molecular Cell, the answer in some cases is the untimely transfer of a gaseous molecule (known as nitric oxide, or NO) from one protein to another.

“We and other researchers have shown that NO and related molecules can contribute to either nerve cell death or nerve cell survival. However, these new findings reveal that NO can actually jump from one protein to another in molecular pathways that lead to cellular suicide,” explained Stuart A. Lipton, M.D., Ph.D., senior author of the study and director of the Del E. Web Center for Neuroscience, Aging and Stem Cell Research at Sanford-Burnham. “Now that we have this molecular clue to the cause of nerve cell death in Parkinson’s, Alzheimer’s, and Huntington’s diseases, we can figure out how to use it to better diagnose and treat these diseases.” Dr. Lipton is also a Harvard-trained neurologist who sees many of these patients in his own clinical practice.

In this study, Dr. Lipton and his colleagues, led by Tomohiro Nakamura, Ph.D., found that NO-like molecules are transferred from caspases, proteins that normally initiate cell death, to XIAP, a protein that normally inhibits cell death. In other words, caspases pass NO to XIAP like a ‘hot potato.’ This process occurs by a chemical reaction known as transnitrosylation. When XIAP is left holding NO, the result is a double whammy for brain cells, since cells are programmed to self-destruct when either XIAP has NO attached to it or when caspases don’t. Hence, both brain cell-destroying events occur at the same time. The researchers then found that XIAP holding the NO ‘hot potato’ was much more common in brains of human patients with neurodegenerative diseases than in normal brains, solidifying their suspicion that this protein modification leads to cell damage.

To calculate which protein is more likely to end up with the NO ‘hot potato,’ caspases or XIAP, the researchers created a new version of the Nernst equation – a 19th century mathematical equation taught in every general chemistry class. This power of prediction might allow doctors to diagnose neurodegenerative disorders like Parkinson’s or Alzheimer’s disease earlier.

“We are currently analyzing cerebrospinal fluid and brain tissue from Parkinson’s, Alzheimer’s and other patients to determine if we can use the NO-tagged proteins as biomarkers for the disease,” Dr. Lipton said.

In order to develop therapies to treat Parkinson’s, Alzheimer’s and Huntington’s diseases based on their new findings, Dr. Lipton’s laboratory is also applying the robotic technology in Sanford-Burnham’s Conrad Prebys Center for Chemical Genomics to screen thousands of chemicals for potential drugs that prevent the aberrant or excessive transfer of NO from one protein to another, and thus to prevent nerve cell injury and death.

This study was supported by grants from the National Institutes of Health (NIH) and the San Diego chapter of the American Parkinson’s Disease Association. For more information about Sanford-Burnham research, visit http://beaker.sanfordburnham.org.

Sanford-Burnham Medical Research Institute (formerly Burnham Institute for Medical Research) is dedicated to discovering the fundamental molecular causes of disease and devising the innovative therapies of tomorrow. Sanford-Burnham, with operations in California and Florida, is one of the fastest-growing research institutes in the country. The Institute ranks among the top independent research institutions nationally for NIH grant funding and among the top organizations worldwide for its research impact. From 1999 – 2009, Sanford-Burnham ranked #1 worldwide among all types of organizations in the fields of biology and biochemistry for the impact of its research publications, defined by citations per publication, according to the Institute for Scientific Information. According to government statistics, Sanford-Burnham ranks #2 nationally among all organizations in capital efficiency of generating patents, defined by the number of patents issued per grant dollars awarded.