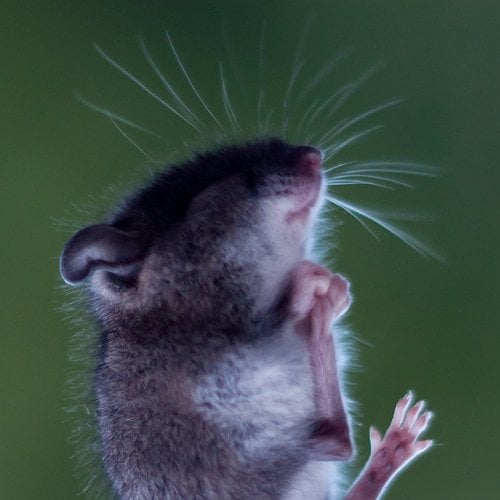 Earlier work by Wang and others had found that all of the 100 to 200 sensors associated with a single whisker project their axons to a large structure representing that whisker in the brain. Each whisker has its own neural representation structure. This is a cute little mouse picture.
Home
Featured

Human fingertips have several types of sensory neurons that are responsible for relaying touch signals to the central nervous system. Scientists have long believed these neurons followed a linear path to the brain with a “labeled-lines” structure.

But new research on mouse whiskers from Duke University reveals a surprise; at the fine scale, the sensory system’s wiring diagram doesn’t have a set pattern. And it’s probably the case that no two people’s touch sensory systems are wired exactly the same at the detailed level, according to Fan Wang, Ph.D., an associate professor of neurobiology in the Duke Medical School.

The results, which appear online in Cell Reports, highlight a “one-to-many, many-to-one” nerve connectivity strategy. Single neurons send signals to multiple potential secondary neurons, just as signals from many neurons can converge onto a secondary neuron. Many such connections are likely formed by chance, Wang said. This connectivity scheme allows the touch system to have many possible combinations to encode a large repertoire of textures and forms.

“We take our sense of touch for granted,” Wang said. “When you speak, you are not aware of the constant tactile feedback from your tongue and teeth. Without such feedback, you won’t be able to say the words correctly. When you write with a pen, you’re mostly unaware of the sensors telling you how to move it.”

It’s not feasible to visualize the touch pathways in the human brain at high resolutions. So, Wang and her collaborators from the University of Tsukuba in Japan and the Friedrich Miescher Institute for Biomedical Research in Switzerland used the whiskers of laboratory mice to map how distinct sensor neurons, presumably detecting different mechanical stimuli, are connected to signal the brain. When the sensory neurons are activated, they send the signal along an axon — a long, slender nerve fiber than conducts electric impulses to the brain. The researchers traced signals running the long path from the mouse’s whiskers to the brain.

Wang’s group used a combination of genetic engineering and fluorescent tags delivered by viruses to color-code four different kinds of neurons and map their connections.

Earlier work by Wang and others had found that all of the 100 to 200 sensors associated with a single whisker project their axons to a large structure representing that whisker in the brain. Each whisker has its own neural representation structure.

“People have thought that within the large whisker-representing structure, there will be finer-scale, labeled lines,” Wang said. “In other words, different touch sensors would send information through separate parallel pathways, into that large structure. But surprisingly, we did not find such organized pathways. Instead, we found a completely unorganized mosaic pattern of connections within the large structure. Information from different sensors is intermixed already at the first relay station inside the brain.”

Wang said the next step will be to stimulate the labeled circuits in different ways to see how impulses travel the network.

“We want to figure out the exact functions and signals transmitted by different sensors during natural tactile behaviors and determine their exact roles on the perception of textures,” she said.

The research was supported by grants from the National Institutes of Health (RO1 DE019440 and NS077986) to Wang; and the Swiss National Foundation, Kanton Basel-Stadt, and ERC Advanced Grant, and the Novartis Research Foundation to Dr. Silvia Arber.