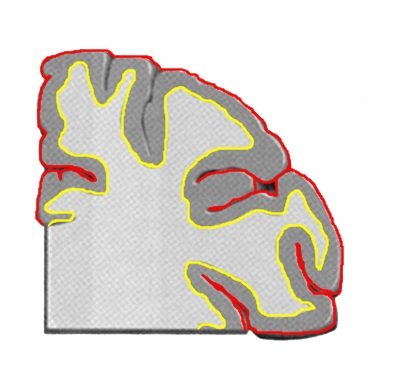 Researchers discovered when animals were paying attention to an area within their field of view, the signal strength through corresponding synapses leading to the cerebral cortex became more effective. This image shows a MRI of the human cerebral cortex coronal slices of a hemisphere with gray/white (yellow) and pial (red) surfaces overlaid.
Home
Featured

How Visual Attention Affects the Brain

New work at the University of California, Davis, shows for the first time how visual attention affects activity in specific brain cells. The paper, published June 26 in the journal Nature, shows that attention increases the efficiency of signaling into the brain’s cerebral cortex and boosts the ratio of signal over noise.

It’s the first time neuroscientists have been able to look at the behavior of synaptic circuits at such a fine-grained level of resolution while measuring the effects of attention, said Professor Ron Mangun, dean of social sciences at UC Davis and a researcher at the UC Davis Center for Mind and Brain.

Our brains recreate an internal map of the world we see through our eyes, mapping our visual field onto specific brain cells. Humans and our primate relatives have the ability to pay attention to objects in the visual scene without looking at them directly, Mangun said.

“Essentially, we ‘see out of the corner of our eyes,’ as the old saying goes. This ability helps us detect threats, and react quickly to avoid them, as when a car running a red light at high speed is approach from our side,” he said.

Postdoctoral scholar Farran Briggs worked with Mangun and Professor Martin Usrey at the UC Davis Center for Neuroscience to measure signaling through single nerve connections, or synapses, in monkeys while they performed a standard cognitive test for attention: pressing a joystick in response to seeing a stimulus appear in their field of view.

By taking measurements on each side of a synapse leading into the cerebral cortex, the team could measure when neurons were firing, the strength of the signal and the signal-to-noise ratio.

The researchers found that when the animals were paying attention to an area within their field of view, the signal strength through corresponding synapses leading into the cortex became more effective, and the signal was boosted relative to background noise.

“There are a lot of questions about attention that we can now investigate, such as which brain mechanisms are disordered in diseases that affect attention,” Usrey said.

The method could be used, for example, to probe the cholinergic nervous system, which is impacted by Alzheimer’s disease. It could also help to better understand developmental disorders that involve defects in attention, such as attention deficit hyperactivity disorder and autism.

Inflammation Is Not Always Linked to Depression

“It’s going to turn out to be important for understanding and treating all kinds of diseases,” Mangun predicted.

Mangun noted that this work is an example of the effectiveness of interdisciplinary collaboration to tackle tough problems. The researchers from the UC Davis Center for Mind and Brain, which studies cognitive brain mechanisms, and Center for Neuroscience, which studies molecular, cellular and system-level brain mechanisms, each brought specific expertise to the collaborative study.

Notes about this visual attention and neuroscience research

The work was funded by grants from the National Science Foundation and the National Institutes of Health. Briggs is now an assistant professor at the Geisel School of Medicine at Dartmouth College.