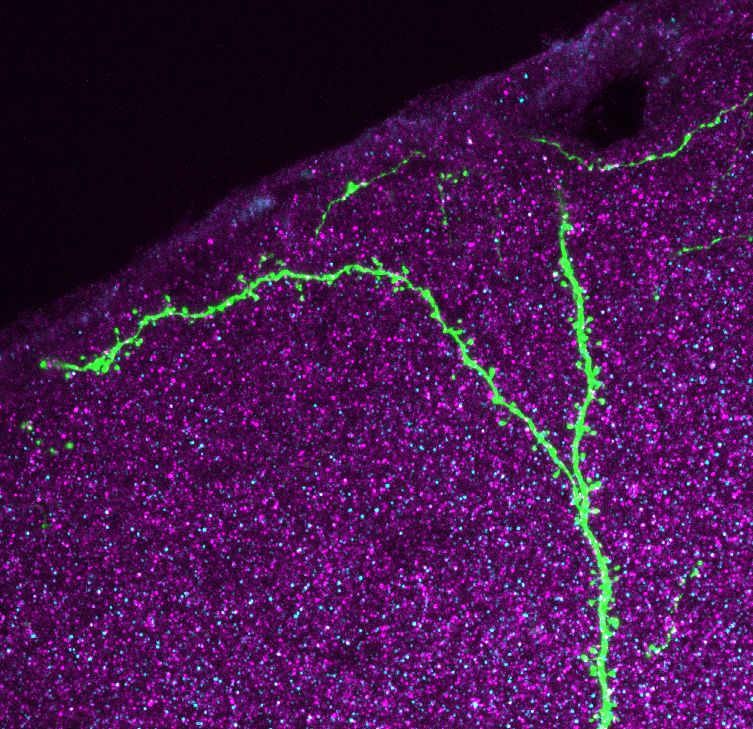 Cross section of the auditory cortex of a mouse brain. A single neuron is highlighted by green fluorescent protein. Dendritic spines that are visible along the processes correspond to excitatory synapses. Credited to IMP.
Home
Featured

A Trace of Memory: Researchers Watch Neurons in the Brain During Learning and Memory Recall

A team of neurobiologists led by Simon Rumpel at the Research Institute of Molecular Pathology (IMP) in Vienna succeeded in tracking single neurons in the brain of mice over extended periods of time. Advanced imaging techniques allowed them to establish the processes during memory formation and recall. The results of their observations are published this week in PNAS Early Edition.

Most of our behavior – and thus our personality – is shaped by previous experience. To store the memory of these experiences and to be able to retrieve the information at will is therefore considered one of the most basic and important functions of the brain. The current model in neuroscience poses that memory is stored as long-lasting anatomical changes in synapses, the specialized structures by which nerve cells connect and signal to each other.

At the Research Institute of Molecular Pathology (IMP) in Vienna, Simon Rumpel and Kaja Moczulska used mice to study the effects of learning and memorizing on the architecture of synapses. They employed an advanced microscopic technique called in vivo two-photon imaging that allows the analysis of structures as small as a thousandth of a millimetre in the living brain.

Using this technology, the neurobiologists tracked individual neurons over the course of several weeks and analysed them repeatedly. They focussed their attention on dendritic spines that decorate the neuronal processes and correspond to excitatory synapses. The analyses were combined with behavioral experiments in which the animals underwent classic auditory conditioning. The results showed that the learning experience triggered the formation of new synaptic connections in the auditory cortex. Several of these new structures persisted over time, suggesting a long-lasting trace of memory and confirming an important prediction of the current model.

Apart from the changes during memory formation, the IMP-scientists were interested in the act of remembering. Earlier studies had shown that memory recall is associated with molecular processes similar to the initial formation of memory. These similarities have been suggested to reflect remodelling of memory traces during recall.

To test this hypothesis, previously trained mice were exposed to the auditory cue a week after conditioning while tracking dendritic spines in the auditory cortex. The results showed that although some molecular processes indeed resembled those during memory formation, the anatomical structure of the synapses did not change. These findings suggest that memory retrieval does not lead to a modification of the memory trace per se. Instead, the molecular processes triggered by memory formation and recall could reflect the stabilization of previously altered or recently retrieved synaptic connections.

The primary goal of elucidating the processes during memory formation and recall is to increase our basic knowledge. Insights gained from these studies might however help us to understand diseases of the nervous system that affect memory. They may also, in the future, provide the basis for treatments that offer relief to traumatized patients.

Notes about this neuroscience, memory and learning research