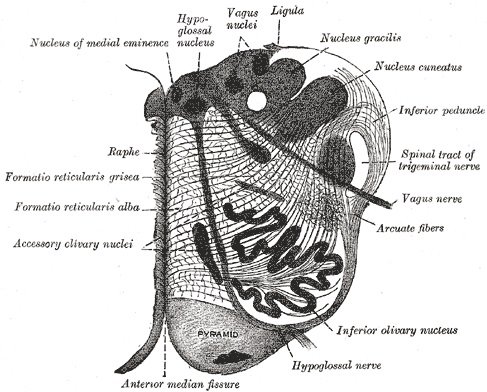 Researchers focused their attention on the brain stem and its sub regions, such as the medulla and dorsal raphe, as these are implicated in thermal regulation. Through neuroimaging studies, the researchers showed activity in the brain stem began to rise prior to the onset of a hot flash. The image shows a section of the medulla oblongata at about the middle of the olivary body.
Home
Featured

A new study from neuroscientists at the Wayne State University School of Medicine provides the first novel insights into the neural origins of hot flashes in menopausal women in years. The study may inform and eventually lead to new treatments for those who experience the sudden but temporary episodes of body warmth, flushing and sweating.

The paper, “Temporal Sequencing of Brain Activations During Naturally Occurring Thermoregulatory Events,” by Robert Freedman, Ph.D., professor of psychiatry and behavioral neurosciences, founder of the Behavioral Medicine Laboratory and a member at the C.S. Mott Center for Human Growth and Development, and his collaborator, Vaibhav Diwadkar, Ph.D., associate professor of psychiatry and behavioral neurosciences, appears in the June issue of Cerebral Cortex, an Oxford University Press journal.

“The idea of understanding brain responses during thermoregulatory events has spawned many studies where thermal stimuli were applied to the skin. But hot flashes are unique because they are internally generated, so studying them presents unique challenges,” said Freedman, the study’s principal investigator. “Our participants had to lie in the MRI scanner while being heated between two body-size heating pads for up to two hours while we waited for the onset of a hot flash. They were heroic in this regard and the study could not have been conducted without their incredible level of cooperation.”

“Menopause and hot flashes are a significant women’s health issue of widespread general interest,” Diwadkar added. “However, understanding of the neural origins of hot flashes has remained poor. The question has rarely been assessed with in vivo functional neuroimaging. In part, this paucity of studies reflects the technical limitations of objectively identifying hot flashes while symptomatic women are being scanned with MRI. Nothing like this has been published because this is a very difficult study to do.”

During the course of a single year, 20 healthy, symptomatic postmenopausal women ages 47 to 58 who reported six or more hot flashes a day were scanned at the School of Medicine’s Vaitkevicius Imaging Center, located in Detroit’s Harper University Hospital.

The researchers collected skin conductance levels to identify the onset of flashes while the women were being scanned. Skin conductance is an electrical measure of sweating. The women were connected to a simple circuit passing a very small current across their chests, Diwadkar said. Changes in levels allowed researchers to identify a hot flash onset and analyze the concurrently acquired fMRI data to investigate the neural precedents and correlates of the event.

“Frankly, evidence of fMRI-measured rise in the activity of the brain stem even before women experience a hot flash is a stunning result. When this finding is considered along with the fact that activity in the insula only rises after the experience of the hot flash, we gain some insight on the complexity of brain mechanisms that mediate basic regulatory functions,” Diwadkar said.

These results point to the plausible origins of hot flashes in specific brain regions. The researchers believe it is the first such demonstration in academic literature.

They are now evaluating the network-based interactions between the brain regions by using more complex modeling of the fMRI data. “We think that our study highlights the value of using well-designed fMRI paradigms and analyses in understanding clinically relevant questions,” Diwadkar said.

Why Are Young People So Miserable?

The researchers also are exploring possibilities for integrating imaging with treatment to examine whether specific pharmacotherapies for menopause might alter regional brain responses.

Notes about this neuroscience and menopause research