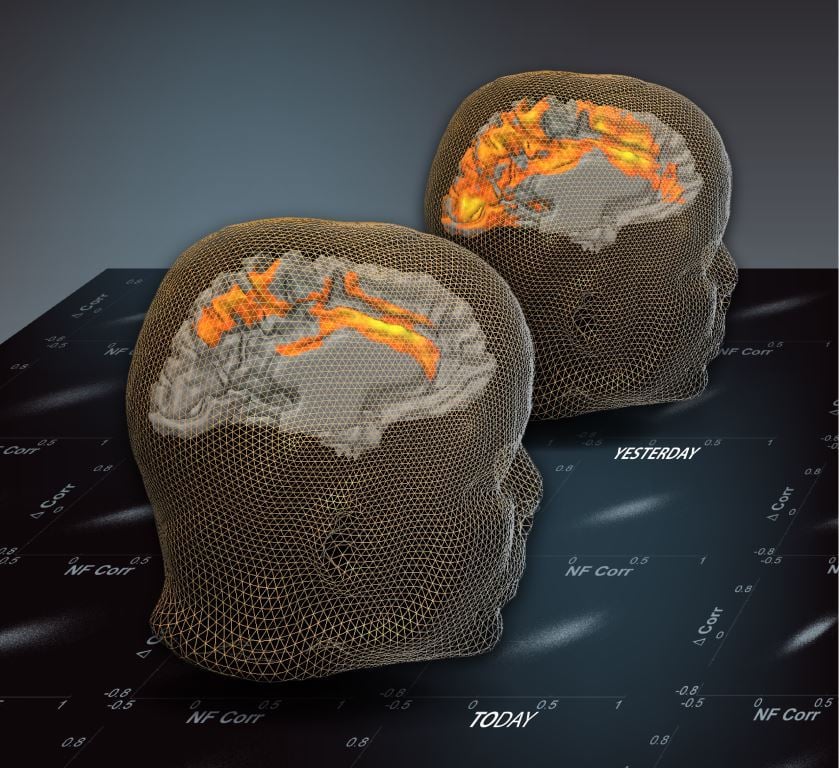 The day after effect of brain activation: The brain image at the back presents spontaneous (resting state) patterns before an fMRI-based neurofeedback training session. The front brain image presents spontaneous (resting state) patterns a day after the training session, illustrating the long-term trace of the training. Credited to Weizmann Institute of Science.
Home
Featured

Past Brain Activation Revealed in Scans

What if experts could dig into the brain, like archaeologists, and uncover the history of past experiences? This ability might reveal what makes each of us a unique individual, and it could enable the objective diagnosis of a wide range of neuropsychological diseases. New research at the Weizmann Institute hints that such a scenario is within the realm of possibility: It shows that spontaneous waves of neuronal activity in the brain bear the imprints of earlier events for at least 24 hours after the experience has taken place.

The new research stems from earlier findings in the lab of Prof. Rafi Malach of the Institute’s Neurobiology Department and others that the brain never rests, even when its owner is resting. When a person is resting with closed eyes – that is, no visual stimulus is entering the brain – the normal bursts of nerve cell activity associated with incoming information are replaced by ultra-slow patterns of neuronal activity. Such spontaneous or “resting” waves travel in a highly organized and reproducible manner through the brain’s outer layer – the cortex – and the patterns they create are complex, yet periodic and symmetrical.

Like hieroglyphics, it seemed that these patterns might have some meaning, and research student Tal Harmelech, under the guidance of Malach and Dr. Son Preminger, set out to uncover their significance. Their idea was that the patterns of resting brain waves may constitute “archives” for earlier experiences. As we add new experiences, the activation of our brain’s networks lead to long-term changes in the links between brain cells, a facility referred to as plasticity. As our experiences become embedded in these connections, they create “expectations” that come into play before we perform any type of mental task, enabling us to anticipate the result. The researchers hypothesized that information about earlier experiences would thus be incorporated into the links between networks of nerve cells in the cortex, and these would show up in the brain’s spontaneously emerging wave patterns.

In the experiment, the researchers had volunteers undertake a training exercise that would strongly activate a well-defined network of nerve cells in the frontal lobes. While undergoing scans of their brain activity in the Institute’s functional magnetic resonance imaging (fMRI) scanner, the subjects were asked to imagine a situation in which they had to make rapid decisions. The subjects received auditory feedback in real time, based on the information obtained directly from their frontal lobe, which indicated the level of neuronal activity in the trained network. This “neurofeedback” strategy proved highly successful in activating the frontal network – a part of the brain that is notoriously difficult to activate under controlled conditions.

To test whether the connections created in the brain during this exercise would leave their traces in the patterns formed by the resting brain waves, the researchers performed fMRI scans on the resting subjects before the exercise, immediately afterward, and 24 hours later. Their findings, which appeared in the Journal of Neuroscience, showed that the activation of the specific areas in the cortex did indeed remodel the resting brain wave patterns. Surprisingly, the new patterns not only remained the next day, they were significantly strengthened. These observations fit in with the classic learning principles proposed by Donald Hebb in the mid-20th century, in which the co-activation of two linked nerve cells leads to long term strengthening of their link, while activity that is not coordinated weakens this link. The fMRI images of the resting brain waves showed that brain areas that were activated together during the training sessions exhibited an increase in their functional link a day after the training, while those areas that were deactivated by the training showed a weakened functional connectivity.

This research suggests a number of future possibilities for exploring the brain. For example, spontaneously emerging brain patterns could be used as a “mapping tool” for unearthing cognitive events from an individual’s recent past. Or, on a wider scale, each person’s unique spontaneously emerging activity patterns might eventually reveal a sort of personal profile – highlighting each individual’s abilities, shortcomings, biases, learning skills, etc. “Today, we are discovering more and more of the common principles of brain activity, but we have not been able to account for the differences between individuals,” says Malach. “In the future, spontaneous brain patterns could be the key to obtaining unbiased individual profiles.” Such profiles could be especially useful in diagnosing or learning the brain pathologies associated with a wide array of cognitive disabilities.

Prof. Rafi Malach’s research is supported by the Nella and Leon Benoziyo Center for Neurosciences; the Nella and Leon Benoziyo Center for Neurological Diseases; the Carl and Micaela Einhorn-Dominic Brain Research Institute; the Norman and Helen Asher Center for Human Brain Imaging; the Murray H. and Meyer Grodetsky Center for Research of Higher Brain Functions; the Kahn Family Research Center for Systems Biology of the Human Cell; the Friends of Dr. Lou Siminovitch; the Adelis Foundation; and the Mike and Valeria Rosenbloom through the Mike Rosenbloom Foundation. Prof. Malach is the recipient of the Helen and Martin Kimmel Award for Innovative Investigation; and he is the incumbent of the Barbara and Morris L. Levinson Professorial Chair in Brain Research.