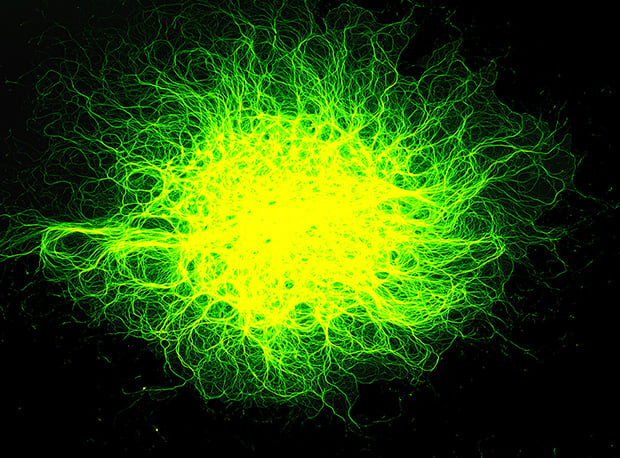 To study how nerve cells respond to injuries in their branches, Washington University researcher Valeria Cavalli grows them in “spots” like the one shown above. Cavalli recently identified a chain reaction that enables repair of these branches when they are cut. Credit Yongcheol Cho/Washington University at St. Louis.
Home
Featured

Researchers at Washington University School of Medicine in St. Louis have identified a chain reaction that triggers the regrowth of some damaged nerve cell branches, a discovery that one day may help improve treatments for nerve injuries that can cause loss of sensation or paralysis.

The scientists also showed that nerve cells in the brain and spinal cord are missing a link in this chain reaction. The link, a protein called HDAC5, may help explain why these cells are unlikely to regrow lost branches on their own. The new research suggests that activating HDAC5 in the central nervous system may turn on regeneration of nerve cell branches in this region, where injuries often cause lasting paralysis.

“We knew several genes that contribute to the regrowth of these nerve cell branches, which are called axons, but until now we didn’t know what activated the expression of these genes and, hence, the repair process,” said senior author Valeria Cavalli, PhD, assistant professor of neurobiology. “This puts us a step closer to one day being able to develop treatments that enhance axon regrowth.”

The research appears Nov. 7 in the journal Cell.

Axons are the branches of nerve cells that send messages. They typically are much longer and more vulnerable to injury than dendrites, the branches that receive messages.

Working with peripheral nervous system cells grown in the laboratory, Yongcheol Cho, PhD, a postdoctoral research associate in Cavalli’s laboratory, severed the cells’ axons. He and his colleagues learned that this causes a surge of calcium to travel backward along the axon to the body of the cell. The surge is the first step in a series of reactions that activate axon repair mechanisms.

In peripheral nerve cells, one of the most important steps in this chain reaction is the release of a protein, HDAC5, from the cell nucleus, the central compartment where DNA is kept. The researchers learned that after leaving the nucleus, HDAC5 turns on a number of genes involved in the regrowth process. HDAC5 also travels to the site of the injury to assist in the creation of microtubules, rigid tubes that act as support structures for the cell and help establish the structure of the replacement axon.

When the researchers genetically modified the HDAC5 gene to keep its protein trapped in the nuclei of peripheral nerve cells, axons did not regenerate in cell cultures. The scientists also showed they could encourage axon regrowth in cell cultures and in animals by dosing the cells with drugs that made it easier for HDAC5 to leave the nucleus.

“This gives us the hope that if we can find ways to manipulate this system in brain and spinal cord neurons, we can help the cells of the central nervous system regrow lost branches,” Cavalli said. “We’re working on that now.”

Cavalli also is collaborating with Susan Mackinnon, MD, the Sydney M. Shoenberg Jr. and Robert H. Shoenberg Professor of Surgery, chief of the Division of Plastic and Reconstructive Surgery and a pioneer in peripheral nerve transplants. The two are investigating whether HDAC5 or other components of the chain reaction can be used to help restore sensory functions in nerve grafts.

Notes about this neuroregeneration and neuroscience research

Funding from the National Institutes of Health (DE022000 and NS082446), the McDonnell Center for Cellular and Molecular Neurobiology, the Hope Center for Neurological Disorders and the National Research Foundation of Korea supported this research.